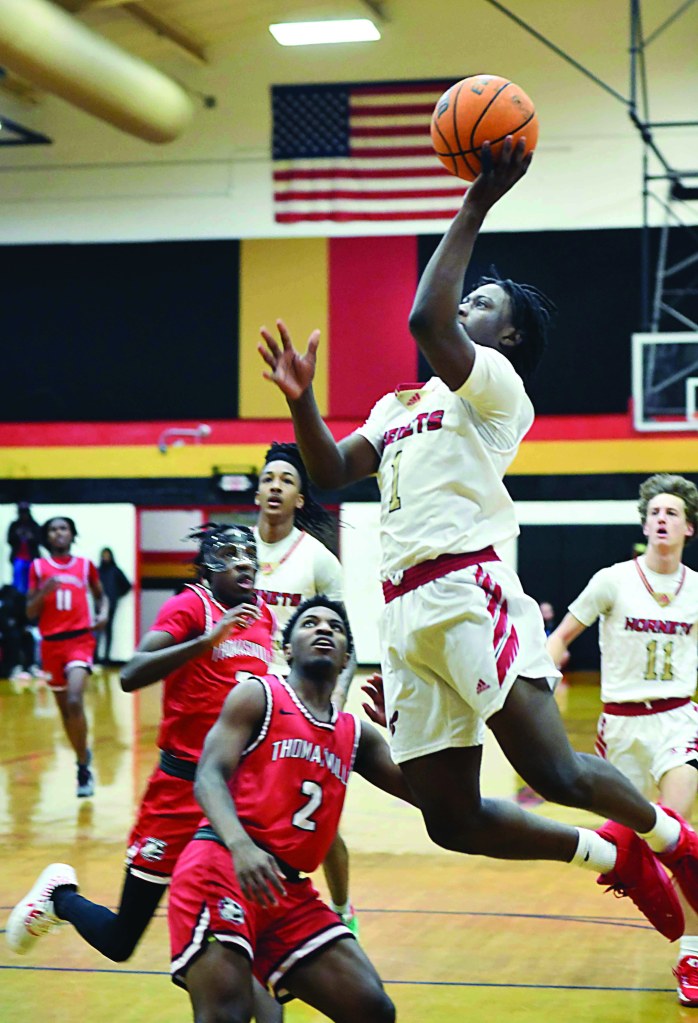 TYRO — Salisbury’s boys weren’t able to blow away a physically overmatched West Davidson team on Tuesday, but a 61-41 victory kept the Hornets on top in the Central Carolina Conference.

Juke Harris didn’t have a good shooting night — zero made 3-pointers — but still managed to score 20 on dunks, layups and free throws. Deuce Walker scored 12, while Mike Geter had 11.

Harris came into the game averaging 30 and had scored 33 in the first meeting with West Davidson, which was an 83-37 laugher for the Hornets.

Harris wasn’t much of a factor in the first quarter of the rematch on West Davidson’s Crim Court. The Hornets used Walker’s offensive rebounding to take a slim lead, but West Davidson shooter Colson Priddy kept the score close with some difficult, long-range efforts.

Harris didn’t score for the first 7 minutes, 50 seconds of the contest, but he had a steal and dunk with 10 seconds to go in the quarter. That got him energized.

Harris turned in an aggressive second quarter, getting long-armed steals and blocks and scoring 12 points. His defense propelled the Hornets to a 32-20 halftime lead.

West Davidson stayed in it for the first three minutes of the second half, but Webb’s back-to-back bombs ended any hope the home team had for pulling off a miracle.

Buckets by Jonathan Ross and Geter closed the third quarter, as the Hornets took a 49-32 lead.

Harris only scored one point in the fourth quarter, but Geter and Walker had two buckets each to finish off the Green Dragons.

Ross and Macari House had 3-pointers in the game, but it wasn’t a memorable shooting night for the Hornets, who did almost all of their damage at the rim.

THOMASVILLE — North Rowan could be a dangerous team in the 1A state playoffs, but first the Cavaliers have to get into those playoffs.

A victory on Tuesday would have helped a lot, but the Cavaliers weren’t able to seriously challenge Thomasville. The Bulldogs easily defended its home court and won the Central Carolina Conference game 75-56.

The Bulldogs are sixth in the 1A West RPI rankings, but North is a bubble team, ranked 31st. The bracket will include 32 teams.

George Maxwell led North with 14 points, while Jayden Polk had 13.

Thomasville’s 24-9 edge in the second quarter provided separation  and a 39-18 lead at halftime.

North (9-10, 4-3) played much better in the second half and was able to trade buckets, but wasn’t able to mount any sort of comeback.