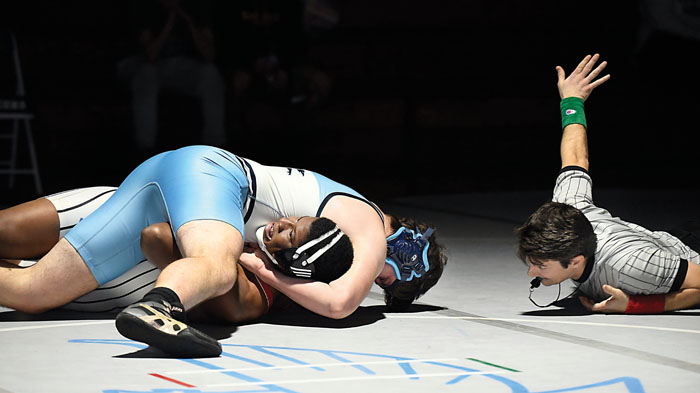 West’s Grayson Burleson pins Salisbury’s Emmanuel Gregory in the 220 class during the county wrestling tournament in December. photo by Wayne Hinshaw, for the Salisbury Post

CHINA GROVE — West Rowan’s wrestling team is 23-0 and ranked third in the state in 3A.

That’s a statewide 3A ranking, not a regional ranking as you see in the basketball RPIs. Fred T. Foard and Eastern Guilford are the teams ranked ahead of the Falcons.

The other individual champs in the tournament were Northwest’s Gabriel Perry (120), Central Cabarrus’ undefeated Jackson Baglio (132) and Charleston Baglio (138) and Concord’s David Tierney (145) and Ethan Treadway (160).

Tierney (32-4) won a major decision against East’s Edwards (31-3) in the 145-pound final and was named Most Outstanding Wrestler.

The brackets for the dual team state playoffs will be released Thursday, with first and second round matches to be held on Saturday, Jan. 28. It’s not known yet whether West Rowan will host, as host teams are based on central location (for four teams) rather than record or ranking.