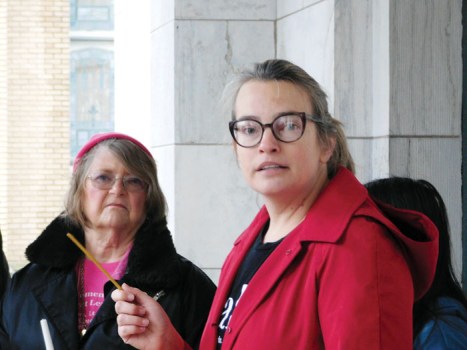 Alissa Redmond, a local activist and business owner, organized the event and while the weather was an interfering factor, she said it was important to gather for a moment regardless, in order to keep hope, and efforts, alive to make change. Elisabeth Strillacci / Salisbury Post 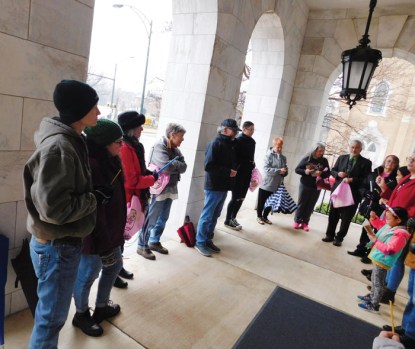 A group of just over a dozen people, including visitors from Charlotte and Greensboro, attended Sunday's cale lighting recognition of the 1973 Supreme Court decision on Roe v Wade that, for 50 years, had guaranteed women the right to an abortion. Elisabeth Strillacci / Salisbury Post 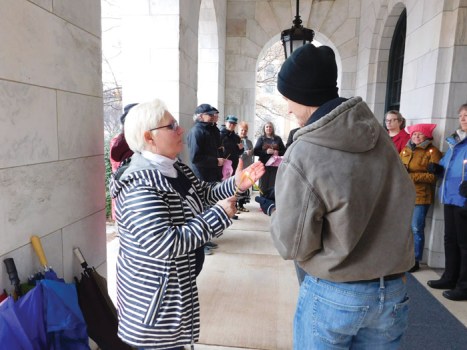 Mayor Pro Tem Tamara Sheffield takes the flame for her candle from another attendee at Sunday's event acknowledging the 50th anniversary of Roe v Wade. Sheffield said she felt it was important to recognize the day. Elisabeth Strillacci / Salisbury Post

SALISBURY — The intermittent rain and cold Sunday did not stop a small but determined group from gathering under the portico on the front of the county office building to celebrate the 50th anniversary of Roe v Wade.
About a dozen people gathered in a circle to mark the date, despite the fact that the U.S. Supreme Court has essentially struck down the law protecting abortion rights.
Alisa Redmond, a well known activist and business owner, organized the event, noting the group would not march, but would light candles and briefly honor the day.
“We’ve met here the last several months since Roe v Wade has changed,” she said. “We are just taking a moment to acknowledge the anniversary.”
The group gathered in a circle, and Redmond began by lighting her candle then passing the flame. As each person received the light, they were invited to speak if they chose.
“I brought this candle in memory of my mom,” said Pam Everhardt Bloom. “I want to continue the tradition she taught me, that women are human and can make up their own minds.”
“Like Alissa, I have two daughters, and I am here today on behalf of them and my son,” said Emily Ford, who teared up as she spoke. “And I just hope — I just hope.”
One couple said they came from Charlotte to participate because they felt it was important to be at a live event, not just a remote event, and another who came from Greensboro agreed.
A grandmother who spoke said when she became pregnant out of wedlock after a divorce, abortion was not an option, and while she loves her son, she worries she did not give him the best life possible because she was forced into motherhood at the wrong time.
The decision on Roe v Wade came down on Jan. 22, 1973, when the Supreme Court decided that the due process clause of the 14th Amendment implied a right to privacy, which protected abortion as a fundamental right.
In Dobbs v Jackson Women’s Health Organization, a case before the court this summer, the Supreme Court overturned that decision, saying the right to privacy was not in the Constitution. Since then states have been deciding reproductive rights individually.
While North Carolina does not have an outright ban on abortion at this time, when the federal law was overturned, a judge lifted the permanent injunction on the state’s 20-week gestational ban. Gov. Roy Cooper has been supportive of abortion rights, but the state legislature has instituted numerous medical restrictions that have made accessing abortion difficult.
“I hope everybody will leave here today with hope, and will keep trying to make change,” said Redmond. “Hopefully there will be improvement, and we will have reason to celebrate in the future.”