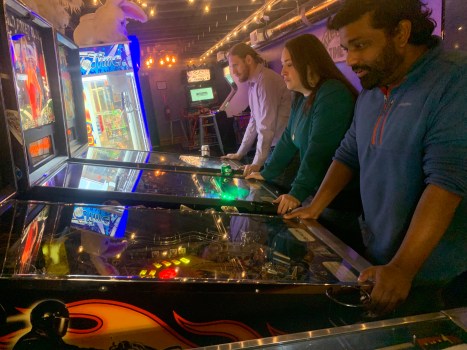 Reliving a childhood memory is just one quarter away at the Wonderland Arcade Bar in Salisbury. - Chandler Inions/Salisbury Post 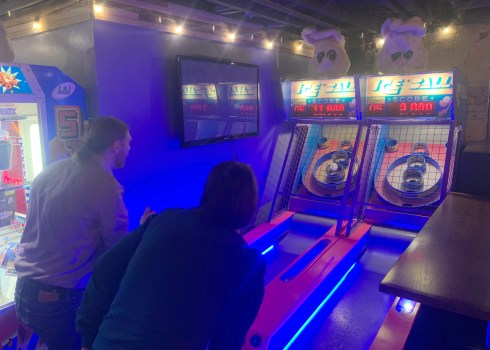 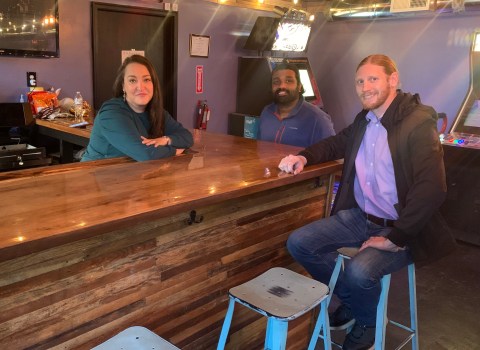 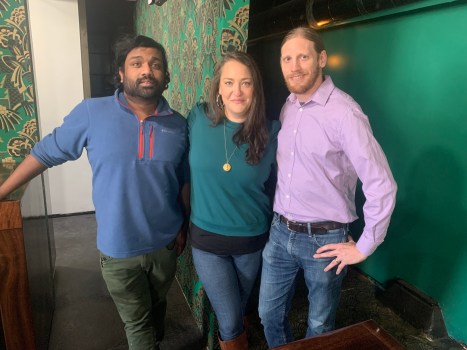 SALISBURY — It might have taken a little longer than originally planned, but Samantha Haspel and Rob Ring’s vision for a downtown arcade bar in Salisbury is finally realized.

The Wonderland Arcade Bar is only half of the husband-and-wife duo’s dream for the space that once held McCanless Motors. The White Rabbit Cocktail Parlour is nearing completion as well. For now, gamers looking for a place to sip some suds can take a walk through memory lane with classic arcade games from their childhoods. It’s been an uphill battle for the project that has been underway since 2021.

“We thought we would be open in four months, but here we are a year and a half later,” Haspel said.

While some minor cosmetic deviations were required from the original concept, Haspel indicated that it still looks like she imagined it in her head. Still, given the building’s construction, they’ve had to be light on their feet at times.

“This is such an old building,” Haspel said. “There are no 90-degree angles. So you are trying to fit pieces and make things work, then you realize you are working with a building that is a trapezoid and not a box.”

Haspel and Ring have gone to great lengths to salvage and repurpose everything in the bar.

Much of the material was from such places as the Bell Block Building. Some of the booths were previously at Uncle Buck’s, a former downtown restaurant and bar. Even the wood they used to construct the bar was taken from their building after tearing down the wallboard.

“We did our best to use as little new product in this bar as possible,” Haspel said.

As for the games inside, lining each wall are classics with everything from Pac-Man to pinball.

“When I was a kid, I liked playing Nintendo,” Ring said. “Legend of Zelda and Contra. Before that, it was Atari. There was Pole Position, Donkey Kong, Frogger, and Asteroids. We have those games here. Most of the games we have here are games I have played before.”

Haspel added, “It evokes nostalgia. We love it when the kids come in, but we also built this for the 35-plus crowd.”

Ring, who grew up in Forsyth County, loved playing arcade games so much that he would get off the school bus a stop early at a convenience store with machines inside.

“If I had a dollar in my pocket, I would go inside and play pinball for as long as that dollar would last me,” Ring said.

It meant a long walk home, but Ring indicated it was always worth it. The bar has television sets on the wall, but sports won’t be shown.

“The other day, we had ‘Family Ties’ playing on one channel,” Haspel said. “We had ‘Ferris Bueller’ on one and ‘The Love Boat,’ all the stuff we loved to watch when we were the age where we were going to the arcade.”

The arcade side will be open Monday, Wednesday, Thursday, and Friday from 5 p.m. until about 10 p.m.

Saturday and Sunday, hours will be 3 p.m. to close.

Children under 18 are allowed in with a parent until 7 p.m. Young adults between 18-20 are permitted alone, but it is $3 per visit.Day memberships are $5.

Although the arcade bar is opening first, Haspel indicated that the cocktail parlor is their primary focus.

“I grew up in New York City, traveled and ate out a lot,” Haspel said. “So I got to taste a lot of different influences and drink a lot of different cocktails from some of the best cocktail makers in the world. We both felt passionate about bringing a little bit of that to Salisbury. That will be reflected in the style of the space, the food we serve and our drinks as well.

“We wanted to create a place we would want to hang out. It’s supposed to be a fun, relaxed party experience for adults. It’s meant to be a great night out or a date. Come have a cigar and a great cocktail.”

The menu will be tapas style. There will probably be 8-10 dishes per night that will change regularly based on what is fresh each week.

The White Rabbit Cocktail Parlour will be open Wednesday through Saturday from 5 until close.

“We anticipate that the kitchen will stay open until about 10 p.m. on Wednesdays, 11 p.m. on Thursdays, and midnight on Fridays and Saturdays,” Haspel said.

The late hours cater to those who might not care for the early bird special.

“My husband and I are the sorts of people who like to eat a little bit later, and there just aren’t a lot of options for that,” Haspel said. “Or if people are leaving the theater and maybe want a cocktail, we want to be that spot.”

The White Rabbit Cocktail Parlour will take reservations up until about 9 p.m. It will be first come, first serve. Haspel said there would be a two-hour limit on that side.

“When we first open on that side, we will only be the dining room,” Haspel said. “Then, as things get further and we feel more comfortable with that service, we will add parties, and then in the spring, we will add the patio. The patio will also be first come, first serve. There will be a bar out there and some food out there ready to go.”

Haspel and Ring don’t have a firm date for opening the White Rabbit Cocktail Parlour, but it is nearing completion, and they hope to have it up and running in the next couple of months.

Haspel is a fourth-generation Salisburian.

“My grandparents lived here,” Haspel said. “My great-grandmother lived here. My mother was born here. Even though I grew up in New York, I spent my summers visiting here. I met my husband in NC. He just fell in love with Salisbury. We are very passionate about a business model that helps improve downtown Salisbury and a business model that hopes to empower and allow our employees to have careers.”

After five years of operation, Haspel and Ring hope to step away from the business and let their employees run it.

“We plan to profit share 49% of business with our employees once we are out,” Haspel said. “We care about trying to make Salisbury sustainable. A place where people can live and work one job, have a life, and survive.”

Wonderland Arcade Bar and the White Rabbit Cocktail Parlour are located at 5 Easy Street in Salisbury.