I’ve been missing my grandmother quite a bit lately. Whenever my life gets challenging or I’m faced with making a monumental decision, I trek out to the cemetery and talk to my grandparents.

Last week when I was all in my feelings, I searched Google for that 1971 Bill Withers song most skinfolk go to in reverence and respect for that long gone family matriarch, “Grandma’s Hands.”  “Grandma’s hands clapped in church on Sunday morning…Grandma’s hands used to issue out a warning. She’d say, Billy don’t you run so fast, might fall on a piece of glass, might be snakes there in that grass, Grandma’s hands.”

My grandmother stood almost 5 foot nothing in height but loomed tall in our house and in the AME Zion Church community in this little slice of marginal heaven where I used to pay tithes.

She was “The Help” before it became fashionable in a garbage movie that didn’t capture the emotional and psychological pain that many women of color like my grandma endured working as a domestic for rich white folks.

She always presented herself as a refined woman, spoke highly of the people whom she offered her services to, and used her expected back door access there to instill a sense of class and grace into our family. She loved having huge family dinners and when we did, it was always the finest in dinnerware, fancy linen napkins, tablecloths and the whole nine.

I ate many buckets of KFC and Holly Farms chicken with plenty of other homecooked fare on the good stuff she had. I often wondered how she was able to purchase such fine dining accoutrements.

She explained it to me one day, proudly saying, “When I worked for those rich white folks at their fancy dinner parties, they didn’t pay me much, so I would take a plate, a napkin, silverware and tablecloths until I got a few nice sets.”

My grandma was straight gangsta before it became  the norm in the hood.

“Grandma’s hands used to ache sometimes and swell…She’d say, Baby, grandma understands. Put yourself in Jesus’ hands.” She believed in the church. I never knew what a Stewardess Board did or what a Rainbow Tea was about, but she reveled in her role with both of them. She even often hosted the preacher for dinner after the Sunday service. “Grandma’s hands used to hand me pieces of candy.”  As an adult, I love butterscotch candy because I remember her digging in her pocketbook and handing one down the pew to me on Sunday mornings.

She was a prim and proper lady who I never saw wear anything but dresses her entire life. It didn’t matter whether she was relaxing inside the house watching the Price is Right or tending to the massive garden out behind the garage. She put heavy emphasis on making sure you protected the family name. She came across as quiet and demure but do anything that brought shame upon this familial moniker and she would step right out of that unassuming role, and verbally fillet you in the sweet name of Jesus. Whenever anyone in the family would accomplish something of note, she would remark, “People are going to know this name!”

As a child, I recall waking up at her house every weekend hearing her in the kitchen preparing breakfast so early; she would beat the rooster at his hollering. As I close my eyes, I can still hear her bare feet sliding across the kitchen floor sounding like sandpaper as she went from the refrigerator, stove, and countertops.  She didn’t cook from a can or a recipe. When her food hit your tongue, you knew it was made with a mixture of homemade goodness and love intertwined. I can feel my small frame laying in one of her four-poster beds with two mattresses so high off the floor, you risked a sprained ankle jumping down. She weighed you down with homemade quilts and blankets so heavy, you never changed positions after you were tucked in.

My grandmother would engage in this same tuck-in breakfast routine every weekend of my childhood without complaint.  I can still hear the delight in her voice from the song that wafted out of the kitchen back to where I laid,  happily tickling my ears, “This little light of mine, I’m gon’ let it shine…”

Cancer sadly ravaged her body and took her way too soon nearly a quarter century ago.  In her waning days, she braved immense pain and suffering. I used to go into her bedroom every evening after work and read the bible to her. Through her shouts of pain and questions to the Lord, I held my grandma’s hand until her last breath. “But I don’t have grandma anymore. If I get to heaven, I’ll look for Grandma’s hands.”

Kenneth L. (Kenny) Hardin is a member of the National Association of Black Journalists. 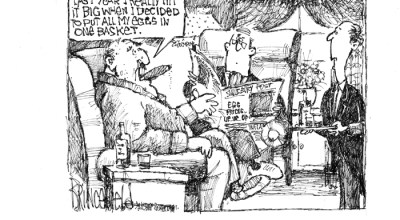