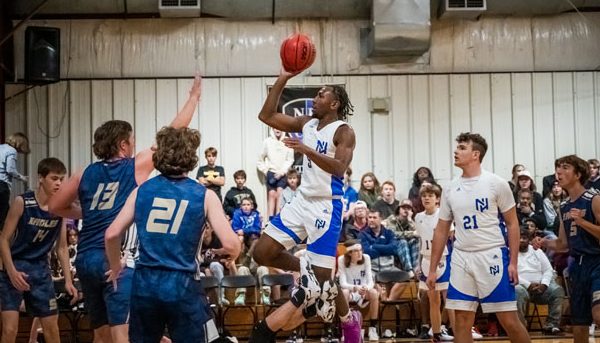 SALISBURY — Every rebuilding job could use someone like Champion Hayden, but only North Hills Christian School has him.

It’s there — just a stone’s throw from Catawba College — that the junior forward has carved a name for himself while lifting the boy’s basketball program to heights it hasn’t reached in nearly a decade.

“Champ Hayden,” said first-year coach John Knox, “has done something unselfish. He’s taken it upon himself to make sure everyone on this team is jelling together, both on and off the court. That’s how he plays the game and how he lives his life, through his will. He’s not making it all about him. That’s why he’s thriving here.”

You hear that, Rowan County fans? It’s Hayden knocking on the door to stardom — and he’s bringing North Hills with him. Through 19 games this season, he’s averaging 20.7 points and 10.3 rebounds-per-game, both tops in a private school league called the Southern Piedmont Conference. Generously listed as 6-foot-2 and 185 pounds, he’s been a double-double machine and given the Eagles something far more important than elusive victories. He’s given them hope.

“My purpose is to bring positive energy and life to this school,” said Hayden, an unpretentious first-year transfer from West Cabarrus. “We’re hoping to build a brand here. It’s almost like generational wealth for North Hills, so those coming behind me can blossom more easily. It isn’t just about me. I’m just passing through.”

While he’s here Hayden is leaving fingerprints on a program that hasn’t enjoyed a winning season since 2014-15, nor won a conference game since 2018. He’s a rugged, physical player who drives the lane with purpose, converts mid-range jumpers and sinks authoritative putbacks at a 51 percent clip. His signature, stop-and-pop floater shows form right off a Wheaties box. As a defender, he’s a fearless rim-protecter often matched against taller, bulkier opponents. And he does it all while maintaining a 3.857 grade-point-average, displaying a casual calmness that belies his leading-man profile.

“This young man, he keeps his emotions in his own pocket,” Athletic Director Brett Arrowood offered. “He characterizes what our program exemplifies. It’s God, family, school and then sports — and he’s right in line with that. Not every kid fits that outline, but he’s got everything our school and our basketball program stand for.”

Currently the Eagles stand last in the conference standings, winless in three outings and 8-11 overall. That’s nothing to pound your chest over, yet encouraging considering North Hills had prevailed in only six of its previous 54 games entering this season. Hayden has been the diesel behind a modest turnaround — recording nine double-doubles, a career-best 31 points in an early-season win over Statesville Christian and 18 rebounds against both St. Joseph’s Collegiate Institute and Sheets Memorial Christian. Then there was the 75-foot pass he made to teammate Mike Brown in a mid-November loss to Elevation Prep Academy.

“One of their guys was coming down court, dribbling right at me, looking for a layup,” Hayden reported. “I went up and blocked his shot, almost out of bounds. (Senior teammate) Connor (McInnis) retrieved it, flipped the ball to me and I threw a long pass down to Mike, who turned it into a reverse layup. I just remember the crowd was going wild.”

Indeed, an intoxicating whiff of success — one both Hayden and Knox hope to ingest more of this season and next.

“I love that he puts the team first,” said Knox, best remembered as the cerebral quarterback who steered Salisbury High to a 2010 state football championship. “He compares himself to Lebron, but that just shows he has high standards. I think he’s got the tenacity of my old friend Darien Rankin. He could jump out of the gym and was always a tenacious basketball player. They both have that mindset of, ‘You can’t stop me. I don’t care who you are or how many men you put on me, you can’t stop me.’ And that’s Champ’s game.”

Arrowood and the North Hills community have stayed busy applauding his efforts. They realize Hayden is the player they go nowhere without.

“We’re trying to make a little bit of a ruckus about him,” Arrowood said. “It’s to let people know our program is back — and Champ could be the centerpiece of what we’ve got building. With him on our side, we expect this team to be the best its ever been next season.”

So that’s the windup. Here’s the pitch: “Right before this interview, he beat me in a 1-on-1 match for $20,” said Brown, a sophomore guard, well-liked cousin and owner of a 17.2 scoring average. “It wasn’t my money. Someone else put $20 on me, but Champ walked off with it because he’s the man.”

He certainly is. Finally, there’s the matter that begs discussion — Hayden’s first name.

“Well, it actually came from my dad,” he explained, flashing that Magic Johnson smile of his. “He told me he knew I’d be great at whatever I do, so he named me Champion. That’s my given name. I’m just trying to live up to it, no matter what I do or where life takes me.”

And champions, tennis legend Billie Jean King once told us, keep playing until they get it right.