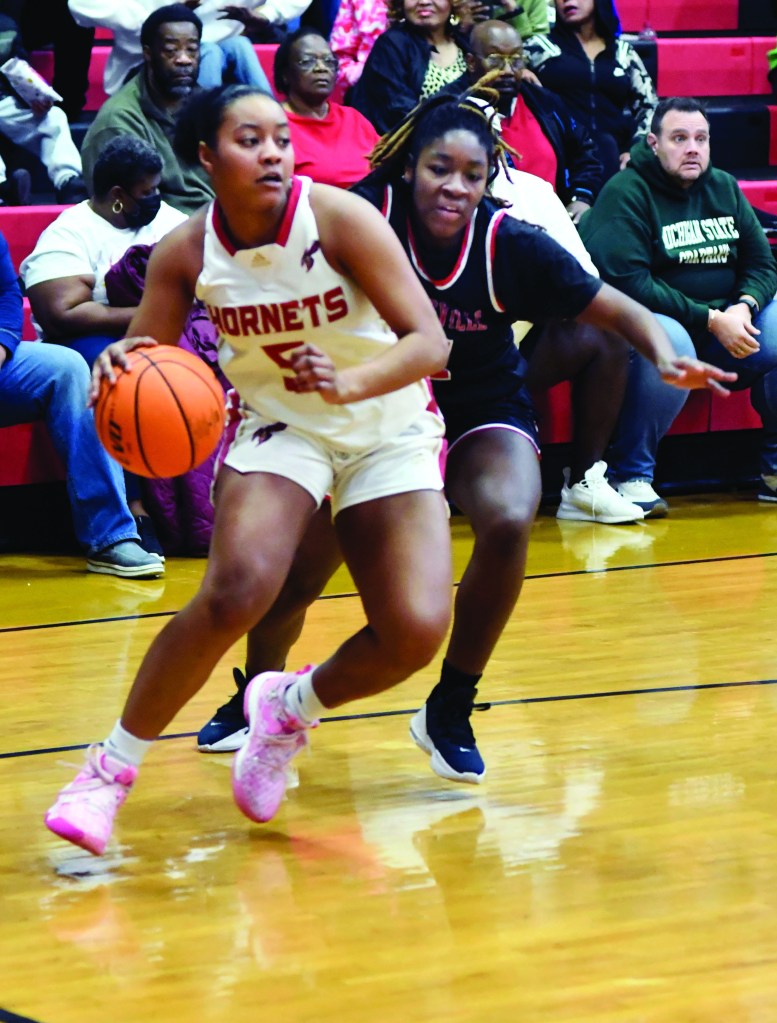 SALISBURY — Salisbury’s girls basketball team against Thomasville is one of the most lopsided match-ups imaginable, but SHS senior Kyla Bryant doesn’t relax much on the court.

Bryant keeps her level of play high no matter who is providing the opposition, and she had 21 points, eight steals, seven assists and five rebounds on Friday, stuffing the stat sheet one more time in a 70-19 romp against the Bulldogs.

Bryant, who recently surpassed 1,500 career points for fifth place in program history, was honored by the school as a McDonald’s All-America Game nominee. There are 722 nominees nationwide (boys and girls). Only 48 will be chosen to play in the game in Houston — the rosters will be revealed later this month — but just being on the nomination list is a big deal. Only 13 girls from North Carolina are on the list.

Salisbury, which rolled 56-5 when the teams played at Thomasville, welcomed back shot-blocker Haley Dalton, who had missed two games, but played without starter Icesis Nwafor (illness).

Bryant is the county’s most skilled player, but MaKayla Noble is a very special athlete and gives the Hornets two of the county’s top five players. She had 12 points and five assists and blocked two shots.

Shamya Arnold had a big game with 10 points, five steals and three assists.

Mariana Zapata and Torese Evans took advantage of a lot of minutes and scored nine points each.

Salisbury is fourth in the 2A West RPI rankings, behind Shelby, East Surry and Randleman, but if the Hornets can get everyone healthy, they’ll have a chance at back-to-back state titles.

North led 21-6 after a quarter and cruised from there. South Davidson had a big fourth quarter to make the final look respectable.

Bailee Goodlett had 27 points, nine assists and five steals to lead the Cavaliers (11-5, 5-1). She sat down after three quarters.

North is eighth in the 1A West RPI rankings. Three of North’s five losses were to West Rowan. North also has lost to Salisbury, one of the top 2As, and to Albemarle, ranked fourth in 1A.

GRANITE QUARRY — East Rowan got chewed up by 60 points by that West Rowan buzz saw on Tuesday, but had no trouble getting back in the win column on Friday against Concord.

The Mustangs (9-8, 5-3) got 13 points from Hannah Waddell, nine each from Addie Plott and Kady Collins and eight from Kori Miller in the 53-20 victory.

Plott and Miller had career highs, as did Sadie Featherstone, who contributed seven points.

East  has two home games coming up that are going to make a huge impact on the Mustangs’ season. East won at Northwest Cabarrus and Lake Norman Charter early, but those two teams are playing better now.

East is 32nd in the 3A West RPI rankings — 32 make the playoffs — and hopes to get Lindsey Cook back from an ankle injury next week. Mary Church, who demolished Lake Norman Charter in the first meeting, will miss the rest of the season with a knee issue.

CHINA GROVE — Business as usual for the West Rowan Falcons on Friday.

West rolled 79-26 at Carson, blowing out the Cougars for the third time.

The Falcons led the South Piedmont Conference game 22-1 after a quarter and were in control 46-9 at the half.

West is No. 1 in the 3A West RPI rankings. East Lincoln is second and is the only other unbeaten 3A team in the state. East Lincoln beat the Falcons 58-56 in the second round of the playoffs last season, although West has added former Salisbury star Jamecia Huntley and freshman Tiara Thompson to what they had in 2021-22.

The Falcons (15-0, 8-0) seem certain to breeze through the regular season without a serious challenge, so the first adversity they’re going to encounter is going to be in the state playoffs. That’s not an ideal situation, but they may be talented enough to handle it.

Thompson had an unusually good night for the Falcons. She came out very hot and scored 14 points, with two 3-pointers, in the first quarter. She finished with 18 to match her career high.

Huntley scored a season-high 16 points. Huntley reached 700 career points, a ton of points for someone who has a reputation as a rebounder/defender. This year’s seniors lost a good chunk of their sophomore seasons to COVID, which makes her point total even more impressive.

West had beaten the Cougars 73-13 and 79-14 in earlier meetings, so Carson coach Brooke Stouder wasn’t displeased with what transpired.

“Our effort tonight was one that I was proud of,” she said, “We’ve set some goals for the rest of the season. As tough as the matchup with West is for us, we worked hard and it will make us better in our remaining games.”

CONCORD — South Rowan’s girls were in the game at halftime, but were blown out in the second half at Northwest Cabarrus.

The Trojans won 67-24 and stayed in second place in the South Piedmont Conference. They lead East Rowan and Central Cabarrus by one game.

“We did play a good first half, but in the second half we forced shots, we turned it over and we gave up a lot of offensive boards,” South coach Alex Allen said.

Kynlee Dextraze scored 13 to lead South. She had 10 in the first half.

Kennedy Hilsenroth scored 19 for the Trojans,who are 19th in the 3A West RPI rankings. A’Lanah Moore made four 3-pointers and scored 15. Re’Ale Walton had 12 points. Kenzie Ortscheid added 10.

South is 37th in the 3A West RPI rankings.