High school boys basketball roundup: Hornets get even with Thomasville 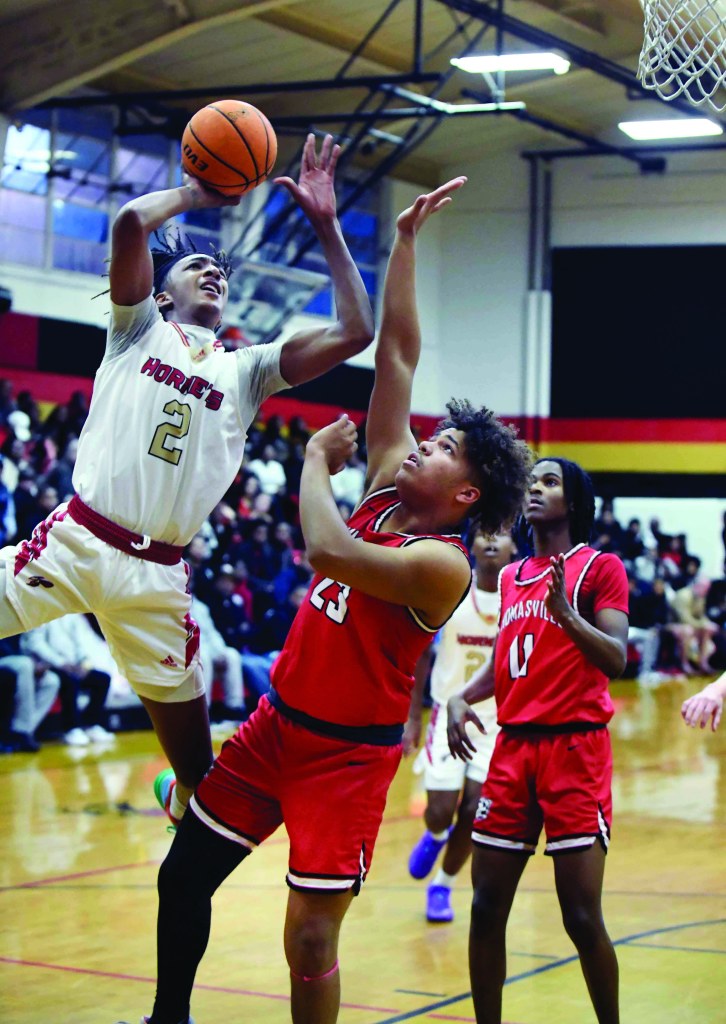 SALISBURY — Salisbury’s boys basketball team had thoughts of another quick knockout on Friday and flattened Thomasville in the opening minutes.

But the Bulldogs managed to scramble back on their feet and were still hanging in there, exchanging punches, right down to final seconds.

Salisbury needed some serious marksmanship at the foul line to take a critical 61-56 victory.

The Hornets (12-5, 6-1) won their fifth in a row and avenged a 63-61 loss at Thomasville (12-4, 5-1) in early December. The teams shared the Central Carolina Conference title last season and they may share it again.

It was a big day — and night — for Salisbury guard Juke Harris, a junior ranked among the top 50 prospects nationally  in the Class of 2024. Harris trimmed his list of  potential destinations from 12 to six, announcing Kansas, LSU, Tennessee, Wake Forest, Virginia Tech and Miami as the finalists in his recruiting journey.

Harris scored 34 to lead the victory over Thomasville. It was an unconventional 34 that included 20-for-23 free-throw shooting. Harris made six field goals, including two 3-pointers.

Harris came out of the gate red-hot, as he has done in other CCC games against South Davidson and North Rowan. He had four of his buckets during a 13-point first quarter. The Hornets led 15-1 at the outset and still had a comfortable 23-7 edge by the quarter’s end,

But the Bulldogs settled in during the second quarter, slowed down Harris and chewed away at Salisbury’s lead. The Hornets were up 31-25 at halftime. The home team took a 45-40 lead to the fourth quarter.

Thomasville was down 49-47 when Hank Webb got a critical stick-back for the Hornets, but Thomasville caught up at 51-all with 2:20 left.

A steal by Dashawn Brown led to another free-throw chance for Geter. Again he made one of two for a 57-54 edge with 20 seconds left.

After a Thomasville turnover, Harris made two more free throws for the final margin. Harris was 8-for-8 at the foul line in the final 1 minute, 40 seconds.

SPENCER — South Davidson’s boys had an NCHSAA RPI ranking higher than North Rowan’s earlier this week, an indication that the system isn’t perfect.

Playing at home, North pounded South Davidson 99-72 on Friday to sweep the season series. North won 79-65 in Denton in December.

RPI is updated nightly. The Cavaliers now have moved ahead of South Davidson. North has moved from No. 33 to No. 31 in 1A West this week, while South Davidson dropped from 30 to 34. Third-two teams will make the playoff bracket.

Everyone who dressed for the Cavaliers (9-9, 4-2) in the Central Carolina Conference game scored. North put five in double figures, with Naejone Whitney and George Maxwell getting 16 apiece. Amir Alexander scored 12. Jeremiah Alford and Jerricho Charleston added 10 each.

North made five 3-pointers, two by Charleston, and eight free throws, so the Cavaliers converted a whopping 38 2-point field goals.

South Davidson (6-10, 3-4) got 27 points from Tanner Delattre and 18 from Tanner Walters. If the Wildcats had three more guys named Tanner, the Cavaliers may have been in trouble.

North stopped a three-game slide, leading 46-32 at halftime and outscoring the Wildcats in every quarter.

Despite the season-high 99 points, North coach Jason Causby stopped short of saying the Cavaliers are back on track.

“We’ll find out if we are on Tuesday,” Causby said.

North plays at Thomasville on Tuesday and will take on the tough Bulldogs twice in a span of eight days.

The Spiders (11-6, 6-2) stayed even with West Rowan and Northwest Cabarrus. The trio is two games behind Central Cabarrus.

East (5-11, 2-6) stayed in the game for a half, using a box-and-one and a triangle-and-two to slow down Concord’s high-scoring duo of James Smith and Brayden Blue.

But you can’t stop everyone, and Concord got huge nights from 6-foot-6 center Jeremiah Howard and guard Bralen Crowder.

The Spiders broke the game open in the third quarter. They scored 56 in the second half.

“We couldn’t stop Howard at all and rebounding killed us all night,” East coach Andrew Porter said. “Then we had a bad third quarter. Lots of turnovers and just didn’t execute on offense.”

Tee Harris led the Mustangs with 17 points. Dylan Valley scored 15 to lift his career total to 927.

Carson lost to the Falcons for the third time on Friday, but again it was interesting.

Carson (8-9, 1-7) got a quick start with 3-pointers from Mikey Beasley, Colin Ball and Jonah Drye before West settled in.

“They showed some different things than they did the first two times we played them,” West coach Dadrian Cuthbertson said. “And we got off to a really slow start. One-and-done possessions, standing around, and they jumped on us pretty good.”

But West (10-6, 6-2) took the lead for good in the second quarter once Athan Gill got rolling. Gill didn’t score in the first quarter, but he had 10 in the second. He propelled the Falcons to a 33-26 halftime advantage.

Once we got into the game, we showed good patience and we played good defense,” Cuthbertson said. “This team usually plays good defense.”

Elijah Holmes has been coming on lately and had a career-best 16. He made three 3-pointers. His eight-point first quarter kept West from digging a big hole.

Kayvone Norman’s 10 points, included a some big free throws in the fourth quarter.

Carson concentrated a lot of its defensive effort on Will Givens and limited him to eight points. He’s been in double figures 14 times.

Beasley scored 17 to lead the Cougars. BJ Howard had a season-high 15. Drye made three 3-pointers.

CONCORD — Northwest Cabarrus had no trouble with South Rowan, winning 71-29 to stay tied for second place in the South Piedmont Conference,

“We couldn’t score the ball,”  South coach Daniel Blevins said. “Got great shots, just couldn’t get them to go.”