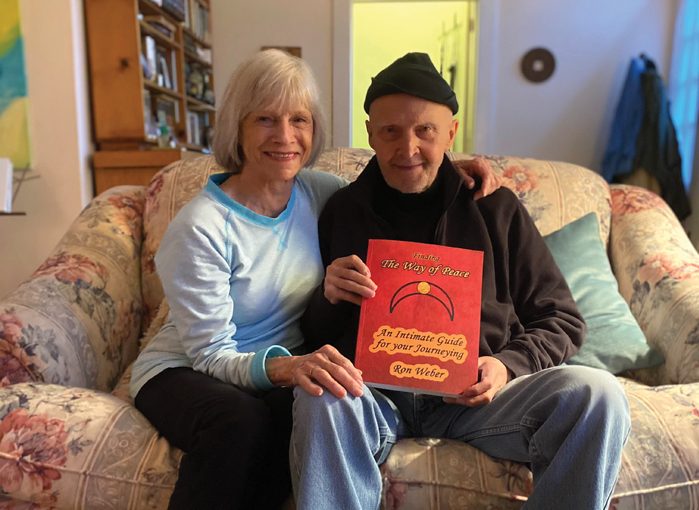 Ron Weber got assistance from his wife, Anne Edwards, in working to get his book published after he had a stroke. Charlie Drape/Salisbury Post.

SALISBURY — It took over 30 years, but Ron Weber finally completed his life’s work and published his book of self discovery and lessons he has learned over the years. Now he’s ready to share with the world “Finding the Way of Peace: An Intimate Guide for your Journeying.”

Weber writes in the forward that the book “is a guide designed to keep close at hand as you journey to meaningful points and through special moments during your lifetime. While on your earthly sojourn, it will help you to evaluate what’s important to you; to explore your thinking, feelings, and imaginings; to listen and look at what’s going on inside; and to become an expanded and exceptional version of yourself.”

Earning degrees in psychology and philosophy, the book draws on Weber’s time spent as a psychologist. He has worked over 35 years in clinical psychology, psychotherapy, hypnotherapy, talk therapy and as a massage therapist.

“If you’re working in psychology, anywhere, it’s all people-oriented. It’s all based on helping people,” Weber said. “The book is about helping people.”

He devoted his career to helping people grow as individuals, as well as learning how to grow himself. The book is the product of the knowledge he has learned, as well as the situations he has experienced, and could be used to help those who may be struggling. While he has a degree in philosophy, he refrained from reading any philosophical books while writing because he wanted the details of the book to be his own.

Instead of chapters, the book has “themes,” such as “Remembering Along the Way,” “Listening Within,” “Growing Self-Responsively” and “Evolving Through the Ages.” Each theme could be seen as a seminar, where Weber shares guidance, advice and his own experience to the reader.

“The book and the truth within it is something that you aren’t going to be able to stop,” Weber said.

Weber finished the book in 2020 and was gearing up to start finding a publisher when tragedy struck.

On Dec. 6, 2020, during the height of the COVID-19 pandemic, Weber and his wife, Anne Edwards, had just finished watching a movie when Weber started to have trouble speaking. At first, Edwards didn’t realize what was happening and thought Weber was “pulling her leg.” But then she realized that he was walking askew and his speech was garbled, all telltale signs of a stroke. She pointed to the telephone and asked him if she needed to call 911. He nodded yes.

Paramedics arrived  and after doing some tests, the medics said Weber had atrial fibrillation, which is an irregular, often rapid heart rate that commonly causes poor blood flow and potentially blood clots in the heart, and decided he should go to the hospital.

Weber was driven to the Novant Health Rowan Medical Center, where he formerly worked as the director of education, and spent the night in the emergency room, where he became unresponsive. Edwards wasn’t allowed to go with him because of the pandemic.

She had to wait by the phone for a night until the hospital called and told her they found a blood clot in Weber’s brain. The clot, along with the atrial fibrillation, caused Weber’s stroke. He remained unresponsive and lost movement to his right side. He was then airlifted to Novant Health Presbyterian Hospital in Charlotte. Edwards was unaware what was happening to Weber when he arrived in Charlotte until she finally received a call at 10 p.m. from a nurse who asked her when she could arrive at the hospital.

She drove to see him the next day. The blood clot was removed, but there was brain damage. He developed aphasia, which is the loss of the ability to understand or express speech.

“He wasn’t out of it, but there was damage,” Edwards said. “It was bad after they removed that clot. He suffered all night long.”

Weber spent the next two weeks in the hospital. The only words he was able to communicate for the first few days were “no” and “OK.” Next, he went to Novant Health Rehabilitation Hospital in Winston-Salem for therapy. He spent another two weeks there.

“That’s when COVID was all through the nursing homes where they have the rehab hospital,” Edwards said. She was only able to visit her husband through his hospital window.

Weber was released on Jan. 3, 2021, a day before his 87th birthday. He spent the next nine months in physical and speech therapy at his home trying to overcome the loss of movement on his right side and the aphasia.

In October of 2021, Weber and Edwards started talking about getting the book published again. Weber was nervous about talking with publishers because of his trouble communicating, although he was making progress. It took him a couple months, but in March 2022, Weber decided he was ready.

Edwards said she would take on finding publishers, while Weber decided to work with his editor, April Barrow, on a final edit. Weber and Barrow would meet once a week and work for up to four hours on the final edits.

“This book is all Ron Weber. My goal being to never interfere with Ron’s writing, style, voice and message,” Barrow said. “By the time we got together on the project he was well aware of what he was doing and made all the decisions about any revisions.”

Also during the process, Weber started to record the audiobook, quite a feat given the fact that only a year ago the author had trouble speaking.

Edwards researched publishers and decided to use Amazon’s self-publishing arm, KDP. The Kindle and paperback versions were published in August 2022 and the audiobook became available on iTunes, Amazon and audible in late December.