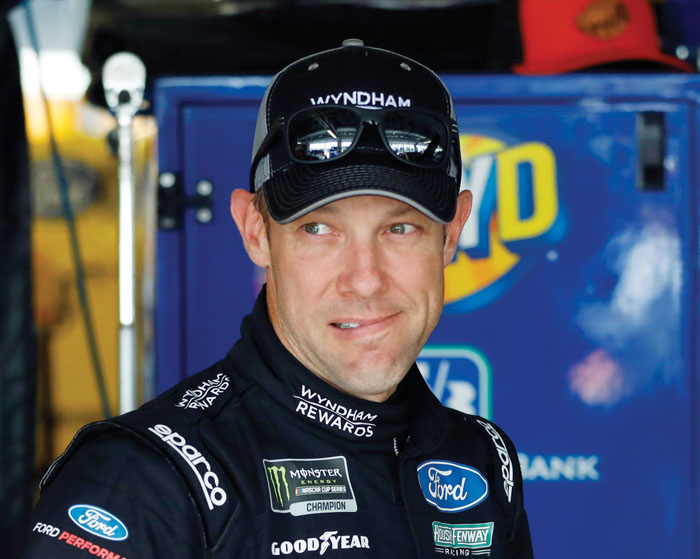 FILE - In this May 11, 2018, file photo, driver Matt Kenseth stands in the garage area before a practice run for a NASCAR Cup Series race at Kansas Speedway. (AP Photo/Colin E. Braley, File)

CHARLOTTE (AP) — Two-time Daytona 500 champion Matt Kenseth finally reached the top rung of his career on Friday night when he was inducted into the NASCAR Hall of Fame.

The 50-year-old Kenseth, who drove 18 full seasons in NASCAR before retiring in 2020 with 39 Cup victories and 20 poles, highlighted a class that also included longtime driver Hershel McGriff and crew chief Kirk Shelmerdine.

The driver who many referred to as “Matt the brat” when he first broke into racing ranks 21st on NASCAR’s career wins list. He won all of the sport’s biggest races including the Daytona 500 in 2009 and 2012, the Coca-Cola 600, the Southern 500 and the All-Star race.

“I always looked at my career as a ladder — you always start at the bottom and you hope to climb your way to the top,” Kenseth said in his acceptance speech. “My ladder has hundreds and hundreds of rungs on it. and without any of them, bottom, middle or top — no matter who you fit in my life — I wouldn’t be here without any of you. So from the bottom of my heart, thank you all.”

“The internal drive is what put Matt on this stage tonight,” Katie Kenseth said.

Kenseth captured the 2003 Cup Series championship behind a dominating season in which he led the points standings for the final 32 weeks. He made the NASCAR playoffs in 13 of 14 seasons and finished runner-up twice. He also won 29 Xfinity Series races.

Kenseth talked about learning to love NASCAR by watching his family race at Jefferson Speedway where he grew up in Wisconsin and begging his father to take him to his uncle Gary’s house so he could help him work on his race cars.

“Racing truly is a family sport,” he said.

Kenseth earned the respect of his contemporaries, including Jimmie Johnson and Kevin Harvick.

Johnson, a seven-time Cup champion, said some of his fiercest battles on the race track have been with Kenseth.

“There was always just a deep level of trust that we’re going to give 100 percent, not step over the line, not clean each other out,” Johnson said. “As a competitor, he was one of the few that I knew we’d race hard but we wouldn’t cross the line.”

Johnson said the two forged a friendship away from the track riding bikes.

“I absolutely call him a friend,” Johnson said. “His family, his kids are close to my kids, our wives are close, like we’ve really become friends and I am so thankful for it.”

Harvick also described Kenseth as a fair driver, but added that he is “that sneaky guy that would dump you.”

“If you did him wrong, he was going to give back exactly what he got,” Harvick said. “As you look back at Matt, he was one of the rare few that would always just figure it out and find his way to the front by the time that the race was over. He’s a great hardcore good racer and I always respected him.”

Shelmerdine was the crew chief and front tire change for four of Dale Earnhardt’s seven championships. Only two crew chiefs have more premier series titles than Shelmerdine: class of 2012 inductee Dale Inman with eight and Chad Knaus, who will be eligible for Hall of Fame consideration in 2024, with seven.

Dale Earnhardt Jr. inducted Shelmerdine, saying “he put my dad on the path to greatness.”

“What makes a great crew chief? It’s simple, a great driver,” Shelmerdine said. “What else can we say about him? When we started together, Dale and I just kind of clicked intuitively.”

The 95-year-old McGriff competed on race tracks for 68 years.

McGriff spoke at length about his career path, saying he started driving vehicles at age 7.

“I have had a happy life and this induction is just icing on the cake,” McGriff said, tearing up several times during his speech. He joked that he still plans to write a book about his life.

Mike Helton was honored as the Landmark Award winner for outstanding contributions to the sport. Helton was the first person outside the France family to handle NASCAR’s day-to-day operations.

Photographer T. Taylor Warren was named the recipient of the 2023 Squier-Hall Award.