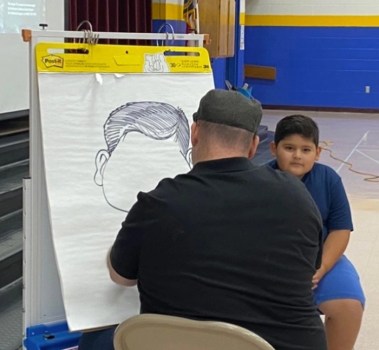 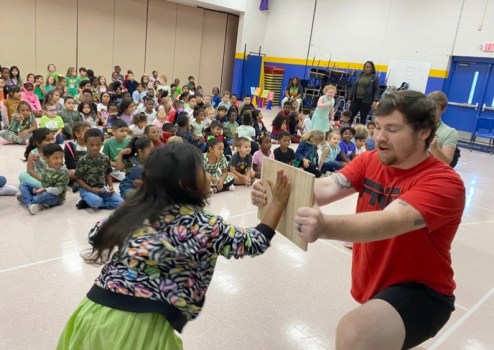 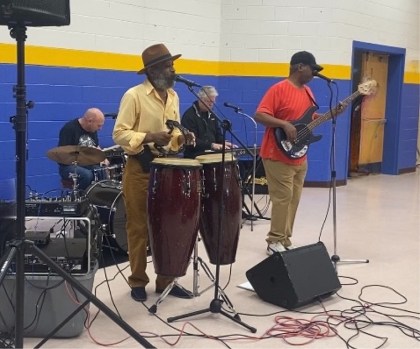 Divided by Four performs for students at Hurley Elementary as part of the school's Fantastic Friday career exposure program. - Submitted 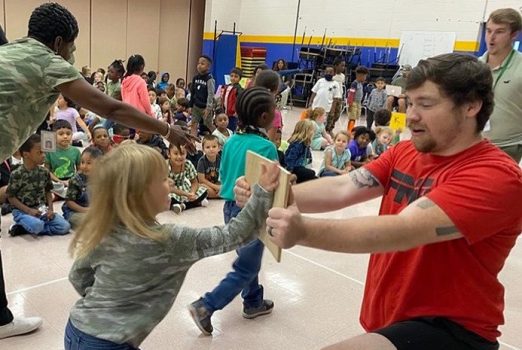 SALISBURY — Educators at Hurley Elementary created an immersive exposure experience for the students, and it’s already opening their eyes to the possibilities they will have in the world.

Hurley Elementary art teacher Michelle Allen indicated on Tuesday that the program, Fantastic Fridays, has illuminated career paths that her students might not have even known about otherwise.

“They can learn that there are opportunities they might be passionate about that they didn’t even know existed,” Allen said.

According to Allen, dispelling the notion that work has to be a drag is a crucial element in the program.

“We want to create some passion by showing the students that people are passionate about what they do,” Allen said. “They are excited about where they work, how they perform, or what they do for other people.”

With each guest, the students are separated into groups. Kindergarten and first-grade students are in one group. Second and third graders are in another. Finally, fourth and fifth graders round out the groups. The guests visit with each group for about an hour.

Hurley Elementary Principal Jennifer Brown challenged the enhancement team to create an interactive way for students to see activities and professions they might not be able to participate in outside of school.

“It shows a lot about our principal,” Allen said. “A lot of principals don’t want to give up even a minute of academic time, but everything is not about academics. It is about giving our children a glimpse of a path they could have in the future. She wants a path that shows them they can contribute to society.”

Since the program’s inception, the guest list has continued to grow as more and more people are stopping by to share a little bit about what they do. Guests from last year include representatives from the Salisbury Symphony, a cruise-line comedian and a dog trainer.

This year, the list has expanded to include a district court judge, Food Lion corporate representatives and the most recent guest, the Salisbury-based band Divided by Four.

“Their lead singer used to be a principal in the school system,” Allen said. “They have a heart for kids. They volunteered their time. It was special and it meant a lot.”

Like all the guests, the bandmates of Divided by Four were at Hurley on a volunteer basis. Drummer Kevin Leichman indicated that they would do it all over again after the ovation they received.

“When the kids started screaming as we got through playing, it felt like we were the Beatles playing at the Hollywood Bowl,” Leichman said.

The band hosted a dance contest for the students to the tune of KC and the Sunshine Band’s “Boogie Shoes.” They played a variety of hits

“We tried to mix it. We played My Girl by the Temptations,” Leichman said. “We did a blues tune, so our keyboard player could show off on the saxophone.”

They also had a question and answer portion.

“We got a lot of good questions,” Leichman said. “There were some strange questions.”

As Allen pointed out, the program would not exist with the guests being willing to volunteer their time with the students.

“The thing that speaks to me is that people are willing to take a three-hour portion of the day to come and share with the kids,” Allen said.

There is no telling what to expect in a given week.

“Our music teacher’s father came one day,” Allen said. “He works for Labcorp. He explained that when the doctor draws blood or asks someone to pee in a cup, where do the specimens go? He showed them the lab where they go, the machines and the whole operation.”

Allen indicated that it is drumming up excitement among the students.

“Even early in the week, they are already asking me about who will be our guests on Friday,” Allen said.

This week, Rowan County Sheriff Travis Allen will be the guest. Next week, the West Rowan High School cheerleading squad and student council will be visiting Hurley Elementary.