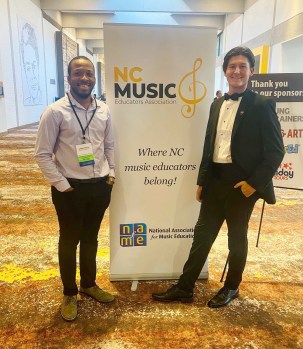 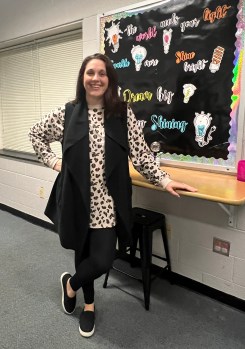 Jaime Constantino is building a legacy at Granite Quarry Elementary School. She was once a student but is now a teacher. - Submitted

The goal of the center is to provide training and faith engagement directly to congregations in the community by being a place to “educate, empower, and equip” congregations to thrive. Williams previously served as program coordinator.

She earned a B.A. in political science and business administration from Winthrop University, and earned a juris doctor degree from the University of South Carolina School of Law. In December, she completed the requirements for her master of divinity degree at Hood.

Dr. Vincent W. Howell, director of the Congregational Faith and Learning Center, said in a news release: “I am excited that Rev. Williams has accepted this new role. She has a passion for ministry leadership and service, and brings an important perspective of ministry innovation and creativity; this helps the church relate to all generations and cultures of people.”

Williams also serves as executive pastor at City of God Ministries in Charlotte. She is CEO of The Purpose Law Firm, and WebEP, a consulting firm.

From across the state, 847 high school singers auditioned for the choir, considered by many to be the most competitive choral audition in the state.

Cardwell joined the top 176 singers selected, placing 12th in the tenor 1 section. The top 22 from each section made choir. It marks Cardwell’s second consecutive year making the NC Honors Clinic, placing in the top 12 for his section both years.

The N.C. Honors Chorus gives students the experience of what it’s like being in a professional choral ensemble. The singers are given the music weeks before the event. Students are expected to learn the music on their own independently before
arriving for the event.

On the first day, Cardwell completed a full day of rehearsal from 9 a.m. – 9 p.m. It included a screening process to show he was ready with his repertoire. Rehearsals continued throughout the day with the full choir. The second day started with a shorter rehearsal and then participants were able to get ready for the performance.

Dr. Hilary Apfelstadt of the University of Toronto led the choir. She has conducted 35 All-State High School Choirs. Through her conducting, Cardwell indicated that he has found a passion he did not know he had, now wishing to further his education in choral directing.

Cardwell has loved music since at young age. He first started in band at West Rowan Middle School playing the alto saxophone where he played in the RSS All-County Band for two years. Ethan began choir his freshman year at West Rowan High with Choir Director Lamar Davis.

Ethan plans to audition again for NC Honors Chorus in 2023. His continued success at the event is paying off. He was awarded a music scholarship to Wingate University for his first-year acceptance into the honor choir. This year acceptance increased his annual scholarship offer to a total of $29,000.

GRANITE QUARRY — They say life is filled with full circles. That’s certainly the case for Jaime Costantino, a teacher at Granite Quarry Elementary, who first began her education journey in those very halls.

Costantino is known to the students at Granite Quarry Elementary School as their quest teacher.

She allows students the opportunity to explore future jobs throughout their time in elementary school. However, what many of them may not know is she was also once a student at the school.

Costantino completed her elementary school years as a Dragon.

The year Koontz Elementary School opened; Costantino was one of several teachers who were relocated due to head count. She worked at Koontz Elementary, Faith Elementary and Erwin Middle School before finding her way back home this school year.