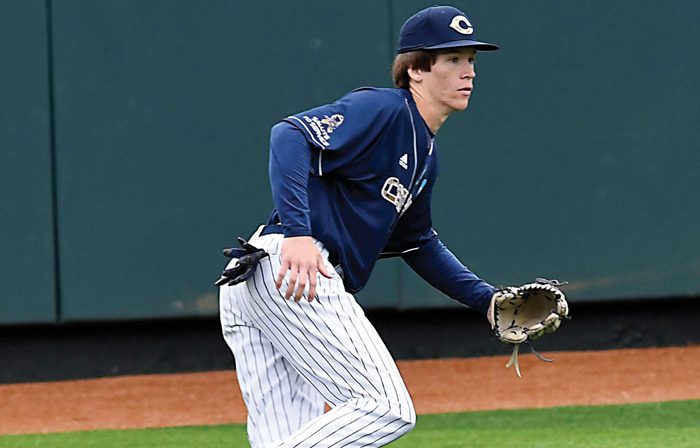 Catawba may use Dylan Driver, a former Carson star, at right field this season. File photo by Wayne Hinshaw, for the Salisbury Post

SALISBURY — Every baseball player has a story, and most of those tales are filled with unexpected twists and turns.

Drew Robertson has a story. He is a huge part of Catawba College’s plans for the 2023 season.

Robertson has some offensive success in his background, but the Indians decided last season that he fit the team’s needs best as a left-handed pitcher.

Robertson expected to be a pitcher in a wood bat league in his hometown of Hendersonville, Tenn., over the summer, but Catawba head coach Jim Gantt says they put Robertson in the outfield while they were short-handed, waiting to get their full roster.

“Then they never could get him out of the lineup, even after they had everyone,” Gantt said. “He hit a ton and he caught everything in center field.”

Robertson wound up being instrumental in his team winning a championship. Catawba has re-evaluated Robertson’s role.

The plan is for him to open the 2023 season as the starting center fielder. Robertson’s new job also directly affects Dylan Driver, the former Carson star, who is one of the Indians’ best players. Catawba had expected to play Driver in center, but now he can play right field.

“Robertson has been very dynamic hitting and fielding and he can really run,” Gantt said. “That allows us to keep Driver in right field, and I think he’s as good as anyone we’ve ever had in right.”

There was a time when Catawba sent masher after masher to the plate, looking to pound pitchers into submission with homers and doubles, but Newman Park plays bigger after the remodel.

The Indians are clearly shifting gears to being more of a running, slashing team, featuring quick players such as Robertson and Driver. Gantt doesn’t have a roster that can wait around for three-run homers, but the Indians expect to have sufficient on-base percentages, speed and bat-handling ability to put constant pressure on opponents.

Catawba was 31-24 in 2022. That’s a solid record that would mean a parade at some places, but for the Indians, with all that they’ve accomplished during Gantt’s great run at the helm, it was not the best of times. The Indians lost eight league games and finished fifth in a South Atlantic Conference that they used to own. Catawba did well enough at Newman Park, but the Indians were a shaky 14-17 outside the friendly confines.

“We had a unique mix of young and old players, and it just didn’t quite work,” Gantt said. “They got along and they liked each other and they were good people, but we didn’t win as many games as we should have.”

Catawba scored six runs per game, but there wasn’t much consistency. In the Indians’ final two losses of the season in the SAC tourney, they lost 6-0 and 3-2.

Gantt is quick to admit he didn’t have his finest season as a coach/manager, but he’s eager to make up for it in 2023.

The power that Catawba did manage last season came primarily from the bats of Zack Miller, Luke Spiva and Dylan Wilkinson. They’re gone.

It’s going to be mostly new guys this time, although there also will be a few familiar faces in new places.

Cameron Mills, who drove in 21 runs, moves from center field to first base.

“It should be a good move for him and us,” Gantt said. “Defensively, he plays first base like a shortstop.”

Harris Jackson, former third baseman, is now expected to be the starter in left field.

“He got hit on the wrist by a fastball at the start of the year and never really was 100 percent,” Gantt said. “But he’s a really good player and he’s healthy now.”

Driver is expected to be joined in the lineup by two more former Carson Cougars, who are new to the program.

Cole Hales, coming off a huge season at Caldwell Tech, is expected to be the third baseman. Logan Rogers, who arrived at Catawba after doing some slugging at Southeastern Community College-Whiteville, should be a middle of the lineup hitter and a home run threat. Rogers can play first base, but his at-bats are expected to come mostly as the designated hitter.

Other outfield options include Blake Marsh, Gardner-Webb transfer Carson Yates, Jackson Mitchell and Colby Hammer, although Hammer is currently sidelined by a broken hamate bone in his hand.

Cooper Bryson, a lefty-hitting transfer from USC Sumter, is expected to be the starting second baseman and lead-off hitter, although returner Jackson Finger is a second-base option against lefty pitching.

Freshman Ty Hubbard, who starred for South Rowan’s state champs, was pushing for a starting infield role, but he suffered a thumb injury on a pickoff play.

Wesley Stewart and Zeb Burns, yet another former Carson Cougar, provide infield depth. Burns probably will take over at third base if Hales is used on the mound as a reliever late in tight games.

Catawba has plenty of catchers on the roster, but catching is probably the biggest concern because of health issues.

Aaron Williams, the former Davie County star, is coming off labrum surgery, and while he’s been cleared to play, he’s still working to get back to 100 percent.

Jackson Price, another transfer from USC Sumter, will catch a lot. Gantt likes his leadership skills.

Freshman Reece Crump could get some starts. JR Lingerfelt, a talented catcher from North Davidson, transferred to Catawba from Louisburg, but Gantt said he didn’t know yet if he’d be eligible this semester. Knee surgery will sideline Patrick Hogan for a while.

On the mound, the best story may be Ryan Street, a former Carson hurler who has risen from a relief role to weekend starter. He wasn’t a celebrated recruit, but he continues to get better every week.

“He’s a testament to what hard work can do,” Gantt said.

Catawba lost Greg Brown and Ben Gilks, so the Indians may rely heavily on transfers in the starting rotation. Austin Fine, from USC Sumter, and Brandon Rodgers, a lefty from Louisburg, are two names to know.

Casey Gouge, a freshman southpaw from West Rowan, is well known to those who follow local baseball and is expected to get starts, especially against lefty-heavy lineups.

Mason Gwyn, a returner, is another candidate for starts.

“His dad pitched at Charlotte and has really done some good work with him,” Gantt said.

The bullpen is potentially the team’s strongest area.

Returner Robbie Cowie, a 6-foot-5 right-hander, has a devastating split-finger pitch and led the SAC with nine saves.

Marshall Raper, a converted catcher, is a serious talent who can throw 92-94 mph. He’s had some forearm issues, but he’s a difference-maker if healthy.

Joseph Webb, who beat Rowan County a few times in his days with the Cherryville American Legion team, is a mentally tough reliever, as is Hales.

Griffyn Shelton has 90 mph velocity and a good breaking ball.

“Another difference-maker for us if he can get it in the zone,” Gantt said.

“We’ve got deeper pitching than we had last season, and that’s crucial because we’re facing grown-man lineups with some 23-year-olds,” Gantt said. “I also like our offensive potential. We’ve got a lot of speed and I think we’ll be much more dynamic offensively than we were a year ago.  We’ve got 39 players on the roster and 35 will be eligible to return in 2024.  And we’ve signed a class this year that we’re really excited about.”

The new season, which will include a video board, opens on Feb. 3 at Newman Park, with Shippensburg coming down from Pennsylvania for a three-game series.

Gantt said Catawba’s schedule was affected quite a bit by Queens’ move up from the SAC to Division I. The plan is for the Indians to make a Florida trip again in 2024 and Gantt said Catawba may make two trips to the Sunshine State in 2025.

Catawba’s annual First Pitch Dinner, the primary fundraiser for the program,  is set for Saturday, Feb. 4, at Newman Park.