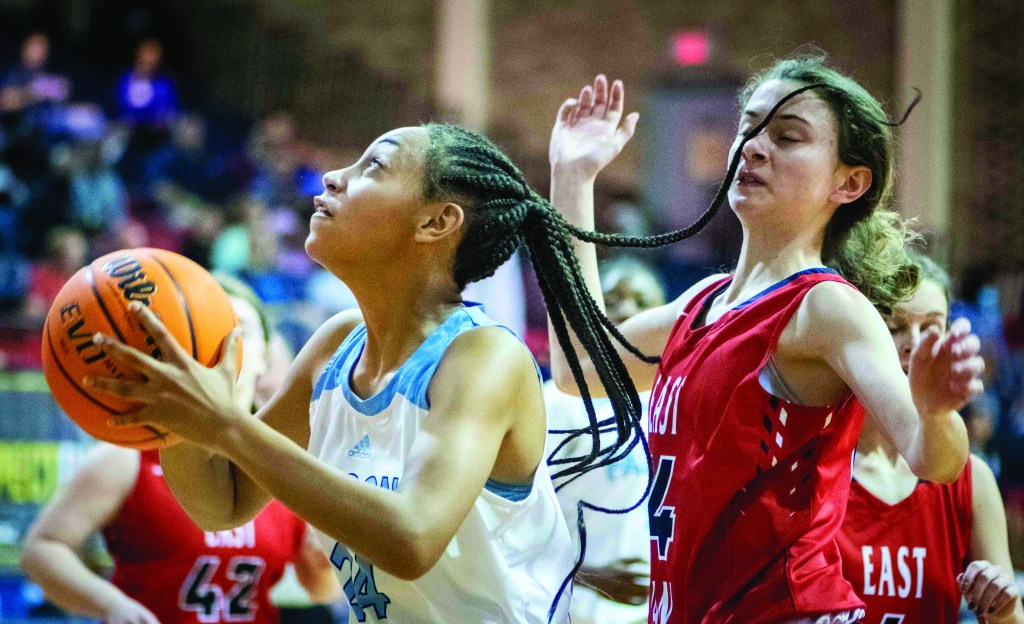 The Falcons were on top 60-27 after three quarters.

West beat North for the third time. This was the closest one.

It was tied at halftime, but West (9-6) moved out to an 11-point lead in the third quarter.

The Falcons played without Athan Gill, but got double-figure scoring from Kayvone Norman (19), Will Givens (17), Elijah Holmes (14) and Romir Hairston (12). It was a season high for Hairston.

Givens is consistent. He scored 18, 18 and 17 in three wins against the Cavaliers. This was the tightest one.

Brant Graham made the Falcons’ only 3-pointer, but West found other ways to score.

“Norman played well and he’s hard to stay in front of when he’s playing well,” West coach Dadrian Cuthbertson said. “He did a good job scoring and  he made good reads.”

George Maxwell scored 16 for the Cavaliers, while Naejone Whitney had 11. Kemon O’Kelly scored eight in the fourth quarter.

North only made two 3-pointers. Maxwell made one early, and Amir Alexander hit one in the second quarter.

Salisbury senior Kyla Bryant will be honored tonight as a McDonald’s All-America Game nominee and will receive a certificate from the food chain.

Bryant and her teammates will be treated to a meal tonight at 6:15 p.m. at the McDonald’s located  at the intersection of Jake Alexander Boulevard and Mooresville Road.

The Blue Bears were able to overcome 22 turnovers by holding Fayetteville State to 25.5-percent shooting.

Jamiah Lane scored 12 for LC, and Alyssa Boyce had 11.

Livingstone trailed by 20 at halftime but roared back in the second half.

Khyree Temple poured in 35 points for the Blue Bears on 14-for-18 shooting and grabbed 12 rebounds.

The Broncos shot 55 percent and got 22 points from Kaleb Coleman and 20 from   Jacob Crutchfield.

Silas Cruse, who had a strong freshman season as Livingstone’s quarterback, has transferred to Shaw.

WINGATE —  Catawba hit its free throws down the stretch and left Cuddy Arena with a 71-65 victory over host Wingate in South Atlantic Conference men’s basketball action on Wednesday night.

The win, the sixth straight for the Indians, pushed Catawba to 12-4 overall and 7-1 in the SAC.

Wingate led for most of the game, but the game was tightly contested with the largest lead of the contest being six points. A three-point play by DeAngelo Epps gave the Indians a 61-59 lead with 2:43 to go and the first since the 13 minutes mark.

Wingate tied the game on a pair of free throws, but O’Mazeon Tinsley’s layup with 2:12 left put Catawba on top for good. The Bulldogs cut the lead to 65-63 with 25 seconds remaining. Catawba was solid at the line, making all six over those final 25 seconds.

Epps and Kaleb Wallace paced Catawba with 15 points. Kris Robinson collected a dozen. The Indians were 14-of-17 at the line, including making 10-of-11 in the second half. Jarren Cottingham scored 21 for the Bulldogs and Donell Nixon chipped in with 10.

Catawba struggled  mightily in the opening half, shooting just 29 percent and going 1-of-15 from beyond the arc.

The Indians trailed just 28-25 thanks in part to seven offensive boards that led to 11 points and a plus-five margin in turnovers.

The Indians canned 55 percent in the second half to just 36 percent for Wingate.

Catawba is back in action on Saturday as the Indians host Anderson at 4 p.m.

GARS golf enthusiasts played at the Revival at the Crescent.

On a rain-soaked course, 85s by Dickie Peeler and   Shook took low gross.

Low net was won by Goodman.

Wyatt Graham shot 3-for-4 on 3-pointers in the second quarter.

Leading scorers for the Jaguars were Ryan McCoy with 18 points, Graham with 16 and Mohammed Eliwa with 5 points.

The Salisbury Academy varsity boys basketball team jumped out to a 22-0 lead and rolled over Concordia Lutheran School 50-18 in Conover.

The Jags will be back in action on Thursday at Statesville Christian School.