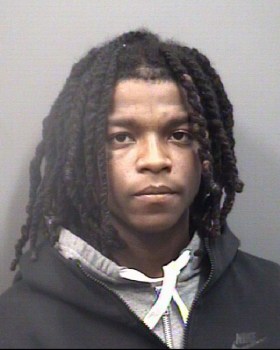 A Charlotte man is in custody following a spate of car burglaries that occurred in and around Salisbury early Wednesday morning. Authorities apprehended him after a high-speed pursuit and foot chase.

Jeremiah Nija Herron, 20, is charged with two counts of felony breaking and entering a motor vehicle, two counts of misdemeanor larceny, and one count of felony larceny of a firearm. He also faces charges of marijuana possession and resisting arrest.

According to the Rowan County Sheriff’s Office inmate portal, Herron was given $55,000 in total bonds.

The pursuit that led authorities to Herron began at approximately 4:30 a.m. when Rowan County Dep. Rick Hadley initiated a traffic stop of a 2014 BMW for driving more than 100 mph in a posted 70-mph zone on Interstate 85.

Reports indicate that the vehicle had a temporary paper South Carolina tag. Once Hadley activated his blue lights and siren, the driver accelerated to 120 mph.

As the chase approached Webb Road, Rowan County deputies deployed the stop sticks to flatten the vehicle’s tires. The stop sticks were effective, flattening the tires and forcing the vehicle off the road.

The vehicle came to a rest, and the occupants reportedly attempted to flee on foot. Authorities apprehended Herron after a brief chase. Rowan County Cpl. Randell Addison and K9-unit Fanta searched the area but could not locate the other occupants.

During the commission of the vehicle search, deputies reportedly found “numerous items (that) appeared to have been recently stolen from car break-ins.”

About an hour later, numerous reports of vehicle burglaries began coming in from around Salisbury and the county. Rowan Chief Deputy Jason Owens indicated that those incidents occurred on Julian Road and Klumas Road. The investigation remains ongoing as authorities attempt to identify the other occupants of the BMW from the pursuit.