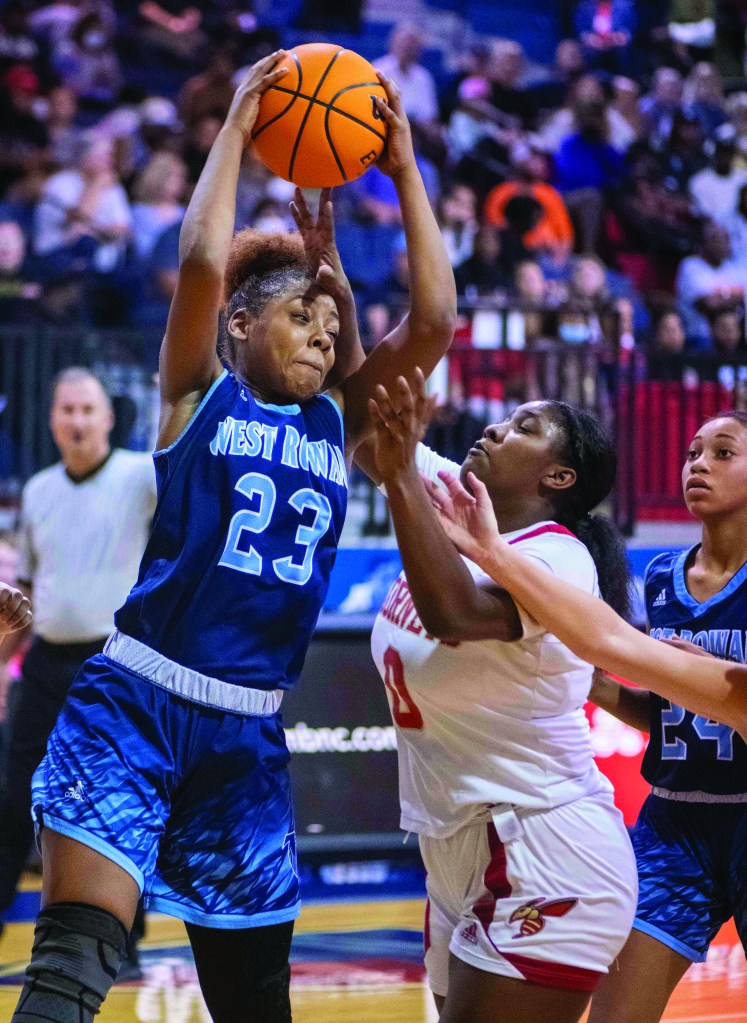 The running-clock (40-point-lead) mercy rule implemented prior to the 2014-15 season may prevent West from breaking the school scoring record for points per game — but maybe not.

The highest-scoring team in program history was the 2003-04 team that scored 70.71 points per game — while allowing 52.1 — in a very competitive environment.

It’s easy to state that it was a very competitive environment because while they won 23 times and had a bench full of people who could score and a very good coach (Toni Wheeler), those 2003-04 Falcons still lost five games. They put up 98 one night, but they did not win their conference. They tied for second. Girls basketball was pretty fierce locally in those days.

It’s no exaggeration to state that the 10th-best player on the 2003-04 West team would be the best player on some of the teams the Falcons are playing now.

But getting back to this season’s Falcons — what they have and what sets them apart is the same thing Salisbury’s state champs had last season.

Extraordinary depth. When coach Ashley Poole sends in her scorebook, any one of seven Falcons might be the scoring leader on a given night.

West not only has starters who can play, they have reserves who would start for just about everyone else.

It’s highly unlikely they will be defeated in the regular season, as there’s a wide gulf between them and the rest of the South Piedmont Conference. West is 30-something points better than anyone else in the SPC. The Falcons  score 20 per game more than anyone else, while allowing 10 fewer than anyone else.

West (14-0, 7-0) is averaging 72.3 points per game, a school-record pace, even with that running clock kicking in just about every night.

The closest games so far for the Falcons — and we’re using “closest” very loosely — were 25-point wins against Northwest Cabarrus and Mooresville.

As far as school defensive records (Poole talks a lot more about defense than offense), the Falcons are also in the running for that mark.

West is allowing 26.8 points per game. That’s a school-record pace.

The school record for fewest points allowed for a season is 28.6 per game. That goes all the way back to the 1965-66 season, an era of very low scores. West had a second-place team that season and scored 36.5 per game.

The 81 points were a season high for the Falcons.

For East, it was the fewest points the Mustangs have scored this season as well as the most they have allowed. That’s a tough combination to overcome.

East (8-8, 4-3) was 3-0 in the South Piedmont Conference not long ago, but the Mustangs are down two starters now due to injury.

“Tiara Thompson started the game on Waddell, but we used several people,” Poole said. “I thought we had a great defensive effort. Defense has been a huge point of emphasis.”

De’Mya Phifer scored 14 for the Falcons. Lauren Arnold and Jamecia Huntley scored 11, and Emma Clarke and Mya Edwards got 10.

They can come at you from a lot of places, with size and with speed, but mostly with depth.

West plays at Carson on Friday and already has won 73-13 and 79-14 against the Cougars.

East should get back in the win column on Friday at home against Concord. East won the earlier meeting with the Spiders 50-14.

LANDIS —  South Rowan’s girls quietly have gotten on a little bit of a roll.

The schedule has been pretty friendly since Christmas, and South has improved some. When the Raiders beat Carson 43-34 on Tuesday, it meant South had won two in a row and four out of five.

“January has been their month,” Carson coach Brooke Stouder said. “They have gotten better and they’ve gotten some good wins.”

South (6-9, 3-4) got 16 points from Kynlee Dextraze and 14 from Madilyn Cherry. Those are the two girls that normally do the bulk of the scoring.

The Raiders also benefited from eight points by Ari Alston.

Carson struggles to score and is averaging 31 points per game.  But the Cougars (2-15, 1-6) got the sort of game they wanted in the first half.

“South was missing shots and Dextraze got in foul trouble,” Stouder explained. “It was the type of low-scoring game we need in order to be successful. And we had great effort in the first half.”

Dextraze started to take charge as South came back in the third quarter and she continued to score in the fourth. All of her points came in the second half.

“Dextraze was the difference,” Stouder said. “We had no answer for her in the second half. And South did a great job of exploiting the advantage they had inside.”

The Raiders had a huge fourth quarter and scored 25 points to win by nine.

“We had a slow start, but we had some good hustle plays and offensive rebounds and picked up our play in the second half,” South coach Alex Allen said. “We did really well inside and got the ball to Kynlee. And we also made some outside shots. We did enough to pull it out.”

South had 19 offensive rebounds and got points off a lot of those second (and third) chances.

Carson beat South 48-34 in the Christmas tournament. Foul trouble neutralized Dextraze in that meeting, but she led the Raiders in the rematch.

Allen was a star player at Carson where she was coached by Stouder, so it was an  emotional breakthrough win for her.

“She’s doing a great job with her team, and I’m proud of her,” Stouder said. “But we’ll keep plugging. We’ve just got to find easier ways to score. It’s been so difficult for us.”

Allie Martin scored 14 for the Cougars. She’s been their scoring leader most of the time.