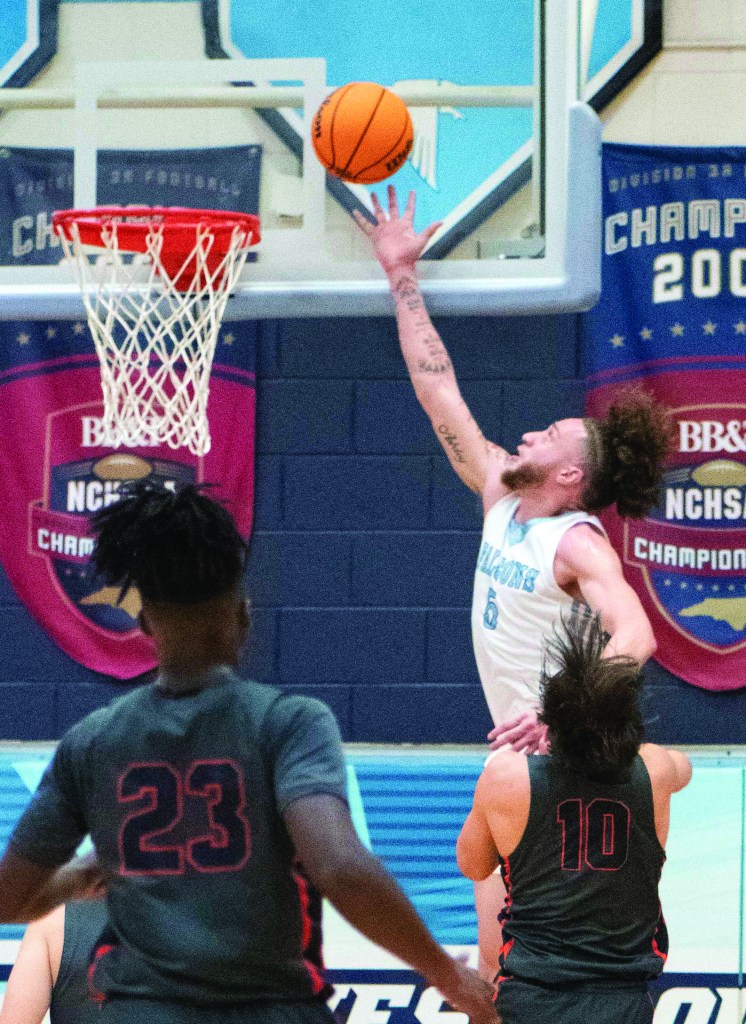 MOUNT ULLA — West Rowan’s boys basketball team is officially in a tie for second place in the South Piedmont Conference after holding off East Rowan 81-71 on Tuesday.

All three have been wiped out by league-leader Central Cabarrus and all three have beaten the bottom four teams, although there aren’t many sure things in the SPC from 2 through 7. Lake Norman Charter, East Rowan and Carson are capable of an upset on a hot night. East can score and made some spirited runs at the Falcons in this one.

East got within eight points in the final minute, but West held on with a career-high 28 points from Athan Gill.

Gill scored 18 in the second half, 11 in the fourth quarter.

“We dug a hole at the beginning, but we weathered some storms, kept fighting and gave ourselves a chance,” East coach Andrew Porter said. “It came down to giving Givens too many open looks and giving Gill too many easy ones inside. And they hurt us from the 3-point line. We didn’t do a good job of running them off of it.”

East played without starter Tijon Everhart and reserve Whitt Hoesman due to illness.

West has won eight out of nine, with a loss to powerhouse Central Cabarrus the only setback in that stretch.

It’s a county week for the Falcons, who will host North Rowan tonight in a non-conference matchup before traveling to Carson on Friday. West has won two tough games with Carson.

East hosts Concord on Friday, Concord beat the Mustangs 75-59 in their first meeting.

LANDIS — Carson was supposed to beat South Rowan, but Carson coach Brian Perry had his concerns.

He figured South would play one of its best games for the season against the Cougars.

It happened, but Carson was able to beat the Raiders 65-48.

“Rivalry game, didn’t expect it to be easy — and it wasn’t,” Carson coach Brian Perry said.

It was a long-awaited first South Piedmont Conference victory for Carson. While the Cougars are 1-6, they are 8-8 overall and still could make the 3A state playoffs.

It was 22-all at halftime. Carson finally got some separation in the third quarter when Jonah Drye got hot.

Drye scored 22 of his career-high 25 points after halftime.

“We played a good first half, executed and slowed down their shooters,” South coach Daniel Blevins said. “But we struggled to score at the end of the third quarter and they were able to extend a lead. We had great effort all night, but we couldn’t recover from that run they made.”