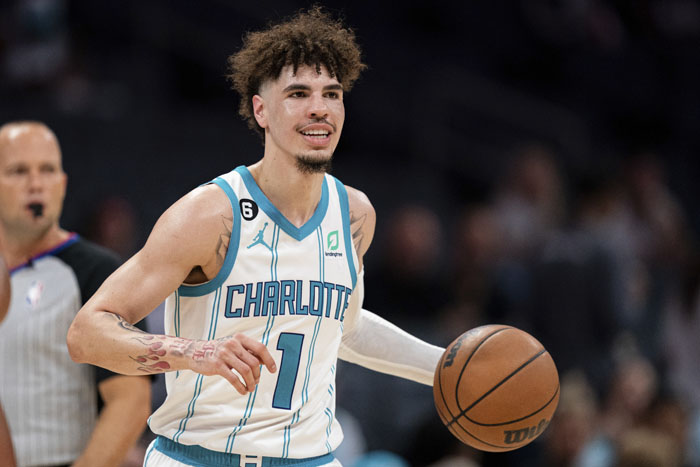 The Hornets, who have the worst record in the Eastern Conference, got their first win since Jan. 6 over the hapless Rockets. Houston, which has the NBA’s worst record and hasn’t won since Dec. 26, has lost a season-high 12 straight.

The victory was coach Steve Clifford’s 208th with the team, making him the winningest coach in franchise history. Clifford, who coached Charlotte from 2013-18 before returning this season, passed Allan Bristow, who had 207 wins.

Jalen Green tied a career high with 41 points to lead the Rockets. He scored five points to power an 11-3 run, capped by a 3-pointer from Eric Gordon, that got Houston within 119-116 with 21 seconds left.

Mason Plumlee made one of two free throws after Houston intentionally fouled him. Green was fouled on the other end, and he also went 1 of 2 to leave Charlotte up 120-117.

Clifford raved about how his team stuck together after Ball’s injury early in the third quarter.

“It’s deflating, for sure,” he said. “But I was proud of the guys, the way they hung together and fought hard. Made a bunch of plays there in the fourth quarter.”

Ball sprained his left ankle, another blow to a Hornets team already missing Kelly Oubre Jr., who is out after hand surgery. Ball said after the game he didn’t think the injury was serious and he didn’t plan to have X-rays.

“I can walk and everything, so I’ll just take it day by day and see what it is,” he said.

Ball was injured when P.J. Washington landed on him after jumping for a rebound with about nine minutes left in the third quarter. Ball appeared to be in a lot of pain and didn’t put any weight on his left leg as he was helped to the locker room.

The team then ruled Ball out with a sprained left ankle.

It’s the third time this season Ball has injured the same ankle. The flashy guard missed part of the preseason and the first 13 games of the regular season after spraining it the first time.

He played just three games before spraining it again on Nov. 16 when he stepped on a fan’s foot late in a game against Indiana. That time he missed 11 games with the injury.

“I feel a little better,” Ball said. “It (doesn’t) feel like them other ones so I think I’ll be straight.”

Ball had 13 points and four assists before exiting.

Houston coach Stephen Silas was unhappy with the energy his team showed to start the second half.

“I actually thought the way that we started the third quarter right after halftime, I was disappointed with that,” he said. “The ball kind of stuck a little bit and we missed a few shots, put our heads down.”

The game was close for most of the night and the Rockets led by three early in the fourth. The Hornets then used a 14-3 run to take a 97-89 lead with eight minutes to go. Washington led the way during that stretch, scoring seven points including a dunk and a 3-pointer.

A layup by Green got the Rockets within six soon after that, but the Hornets scored the next six points to make it 105-93 with 5 1/2 minutes remaining.

McDaniels capped that run with a one-handed dunk off an assist by Rozier after a turnover by Gordon.

Rockets: Houston rookie Jabari Smith Jr. sprained his right ankle in the third quarter and did not return. … Kevin Porter Jr. was out for the fourth game in a row with a bruised big toe. … Alperen Sengun had 24 points and 12 rebounds.

Clifford was impressed with the performance of rookie Mark Williams, who tied a career high with 17 points off the bench. Williams was the 15th overall pick in the 2022 draft.

“He’s very poised on the floor,” Clifford said. “He did a really good job.”

Rockets: Play at Minnesota on Saturday night in the first of two consecutive games against the Timberwolves.