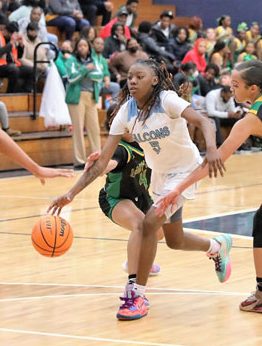 De’Mya Phifer (5) had 14 for the Falcons in Tuesday's victory. File photo submitted by Jacqui Smith Watson

The undefeated Falcons led 30-2 after a quarter, and reached a 40-point lead for a running clock in the third quarter.

West (14-0, 7-0 South Piedmont Conference) got 14 points from De’Mya Phifer, 11 each from Lauren Arnold and Jamecia Huntley and 10 apiece from Mya Edwards and Emma Clarke.

LANDIS — After a foul-plagued first half, Kynlee Dextraze took over in the second half and led South Rowan to a 43-34 South Piedmont Conference win against Carson.

Dextraze’s teammates did a good job of feeding the post and she scored all of her 16 points in the second half.

Allie Martin led Carson (2-15, 1-6) with 14 points, and the Cougars got nine each from Alona Locklear and Laila Furr.

LANDIS — Carson’s sophomore guard Jonah Drye had a sizzling second half and scored 22 of his 25 points after the break.

Drye led the Cougars (8-8, 1-6) to a 65-48 win against South Rowan. It was Carson’s first South Piedmont Conference victory of the season.

The Cougars got 16 points from Jay McGruder and 12 from Mikey Beasley.

West has won eight of its last nine games, with the loss coming to Central Cabarrus, the top-ranked team in 3A.

Elijah Holmes made a huge contribution with 14 points and Brant Graham made three 3-pointers.

East got in an early hole but had some runs and kept fighting, with Dylan Valley (26) and Tee Harris (24) putting up big numbers.