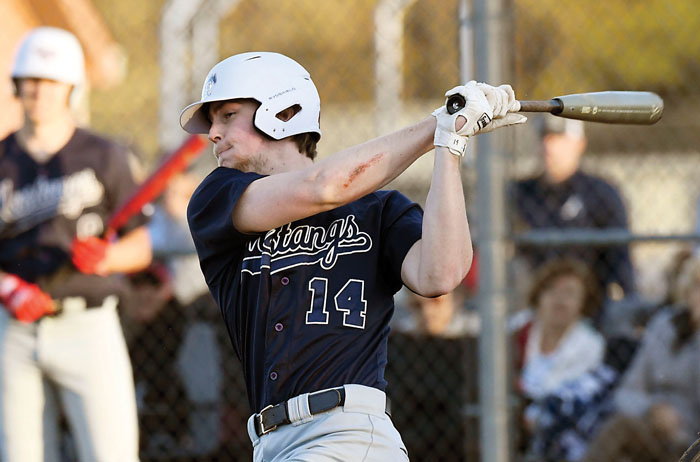 Morgan Padgett, at 6-foot-4 and 210 pounds, will be counted on for RBIs and may be the No. 2 pitcher for East before moving on to UNC Pembroke. File photo by Wayne Hinshaw, for the Salisbury Post

GRANITE QUARRY — It hasn’t been a routine life for East Rowan senior Morgan Padgett, who has signed with UNC Pembroke.

He’s a really good baseball player who always was 15 months younger and one class behind his brother, Cameron Padgett, who was a spectacular baseball player.

Cameron was one of the top pitchers in East Rowan history, a two-time Patrick Snider Memorial Award winner as Rowan County Pitcher of the Year. Cameron is so sharp on the mound that he’s expected to help the UNC Tar Heels this season as an 18-year-old true freshman.

“When we were growing up, Cameron was always the best guy around,” Morgan said. “We went at it sometimes because we’re both competitors and and brothers do go at it, but being one year in school behind someone like Cameron was a positive. I always looked up to him, so I pushed myself to try to be like him, to try to compete and dominate the way that he did. And he was a great guy to have around. He mentored me. He made a big difference for me as far as learning the mental aspects of baseball.”

When discussing Cameron and Morgan Padgett at the same time, it is important to refer to Morgan as the younger brother not the “little brother.” Morgan is the more physically powerful of the two. Cameron, long and lean,  may have gotten his weight up close to 180 pounds as an East senior.

But Morgan is 6-foot-4, 210 pounds. He mauled some people as a linebacker on the football field in the fall — he was all-conference and all-county — and he’s a warrior in the East weight room.

“He kind of sets the standard in the weight room,” East head baseball coach Brett Hatley said. “He’s strong. He’s got a great work ethic and our young guys look up to him. They look at him and it’s like, ‘Man, that’s how hard I need to work if I’m going to get to the next level.'”

Football and baseball often have different success rates at East.

East’s football team was 1-10 in the fall. East baseball, with Cameron and Morgan Padgett in key roles, was 25-5 last spring and was one of the state’s best teams.

“I enjoyed football,” Morgan said. “I wouldn’t say I’m fast, but playing football did make me quicker. I had to be on my toes all the time because I might be blitzing or I might be dropping into pass coverage.”

Morgan got into baseball early, although he usually was on different teams growing up than Cameron.

While Cameron was terrific on the mound for East in 2022 (10-1, 0.55 ERA, 115 strikeouts) and stroked enough singles to bat .340, Morgan was one of the Mustangs’ top RBI guys. He had 24, second on the team. More than once he came through with the key hit that made a winner out of Cameron in a pitching duel. Those were fun nights.

“My batting average last season wasn’t what I wanted it to be,” Morgan said. “But we always had guys on base and I had some good RBI games.”

His .309 wasn’t bad in a South Piedmont Conference where South Rowan’s Haiden Leffew, West Rowan’s Casey Gouge and Carson’s Hayden Simmerson, among others, were no picnic to hit against.

Morgan frequently mashed during the summer months for the South Charlotte Panthers. That’s high-level showcase baseball. Morgan had six RBIs in one game.

“One of the Panthers’ coaches went to UNC Pembroke (that would be A.L. Brown head coach Empsy Thompson), and that’s how things got started with them,” Morgan said. “They watched me play and invited me to a camp down there. They showed me around the school and then they asked me if wanted to be a Brave.”

That’s what he wanted. He gave a verbal commitment.

As far as the future, Cameron profiles as a first or third baseman at UNCP, although Hatley believes pitching may be an option. He’s leaning toward exercise science as a major.

Morgan was honored along with East teammates Chance Mako and Blake Hill with a Friday signing celebration in the East auditorium, the same room where Cameron signed with the Tar Heels not too long ago. Cameron couldn’t get away from school, but he attended Morgan’s ceremony via FaceTime.

Morgan’s role with the 2023 Mustangs will be bigger than the one he played in 2022. Now he’ll not only be counted on for RBIs, he may be the No. 2 pitcher behind N.C. State signee Mako. When Morgan is not pitching, he’ll be at first base or DH or maybe the outfield.

“Morgan threw very well in the fall league,” Hatley said. “He’s a good pitcher, but he hasn’t pitched much for us because we’ve always had a lot of arms in front of him. We’ve had some really good guys.”

Morgan doesn’t have huge velocity — his fastball is in the  low 80s — but he throws strikes and has an assortment of secondary pitches.

“The biggest thing we have to try to replace from last year’s team is Cameron’s great pitching,” Morgan said. “But Mako is going to be really tough every time he goes out there, and I have confidence in myself that I can pitch well enough to win games. It is kind of my time now. It’s my time to help East Rowan win the way that Cameron did.”