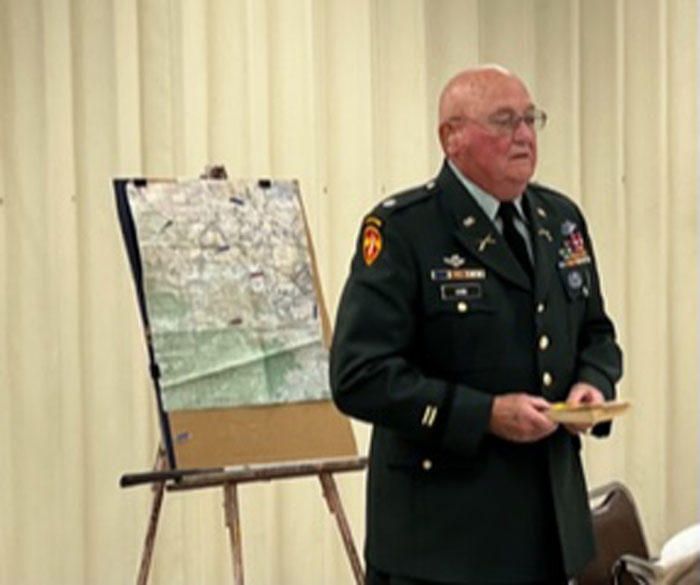 Submitted photo — Retired Lt. Col. Tyrus Cobb spoke the local Military Officers Association of America (MOAA) about his experience as the senior adviser to the South Vietnamese during the 1968 Tet Offensive.

Retired Lt. Col. Tyrus Cobb briefed the membership of the local Military Officers Association of America (MOAA) and guests about his experience as the senior adviser to the South Vietnamese Parachute Division’s Second Airborne Battalion during the 1968 Tet Offensive at Hue. He was awarded the Purple Heart for his action during this battle.

This is the account he gave those who attended:

After combat fighting with the battalion in the Vietnam’s Second Corps near Dak To, the group retired to its base in Saigon to refit.

On Dec. 31, 1967, the battalion flew to Vietnam’s north-most corps area and took defensive positions about 20 kilometers north of Hue city to strengthen that area among the rural population. For nearly a month the battalion conducted “search and destroy” seeking contact with Viet Cong/North Vietnamese forces. The battalion once rode on armored carriers, but most of the searches were on foot (after all we were infantry). We did not make much contact with our foe and only had light casualties. All the way, ones and twos were allowed to go on leave as the Tet (“Christmas,” “New Year’s,” and weddings all rolled in one for celebration).

On Jan. 28, 1968, the second battalion was alerted for a helicopter assault into the jungle 5 kilometers west of Hue city, as intelligence had noted a number of “cooking fires” in that area (enemy folks likely living there). Using Marine CH-46 heavy lift birds, we (about 250 soldiers) were set down into the jungles and had light contact. After an hour of searching the area we made a huge armament find in some caves. Among the weapons including six 60mm mortars, 27 new SKS 7.62mm rifles, six 9mm submachine guns, and the real biggies — 23 RPD 7.62d light machine guns, as well as, three tons of rice and loads upon loads of ammunition. (This find, helicoptered back to the South Vietnamese First Infantry Division in the Citadel of Hue city, was credited with stopping the later onslaught against the division headquarters.)

At this point, we did not know the strength there in the jungles west of Hue. Later, we realized there were two regiments (upward of 750 NVA each) in the area we had found that cache, as well as, three more regiments just north of our jungle position and three more regiments south of Hue all readying for the Tet Offensive. (Note: The NVA did not want to attack our “little” 250 in strength as it would give away the pending Tet Offensive.)

We returned to our defensive positions and set up for our parachutists to celebrate Tet. We did that with a feast for an hour or so. Then,  Feb. 1 1968, at 0235 hours a huge “boom” near us and all were alerted to an attack. It did not come where we were, except at a bridge about a mile from us. We were ordered to walk about seven miles to a point where we would board trucks to carry us to Hue to aid the extremely heavy attack of seven NVA regiments against Hue, three such into and through the Citadel (three kilometer by three kilometer square bastion, with 26-foot high walls that were 40-foot thick at the base) where several thousand folks lived and the 1st Infantry Division was headquartered.

The 7th Parachute Battalion went toward Hue from the north with armored carriers only to drive into a well-laid ambush short of the Citadel and suffered very heavy casualties. About that time my group arrived at a point about 10 miles from Hue and trucks were waiting for us. We were told to “drop our packs,” as we would be back in a few hours. Huge mistake! (We saw our packs 12 days later!) We rode the 10 miles toward Hue and ran into a small number of the 7th as they had lost many with only about 60 effectives.

Our 2nd battalion got set and attacked the NVA who still held a village right next to the Citadel. We took the NVA position with light casualties; but our new executive officer, a major, was hit in the head and died. We stayed there the whole night and moved cross-country into the only friendly gate left into the Citadel.  We rested for an hour and received orders to attack one mile toward the Citadel west wall. We did so and clearing bad guys fortified in civilian homes; that was painstaking combat! On the second day, we were in place about 100 meters from the west wall. The battalion commander decided to make a stealthy night attack at 2300 hours (11 p.m.). That really got me “going,” as that is tough and dangerous and a tactic that only the best infantry units do. About 2200 (10 p.m.) we got orders to withdraw immediately to the division command post for new orders.

Our next day our orders were to attack south toward the Citadel south-most wall, clearing houses on the way. We were down to 200 effectives and still taking WIAs/KIAs every day. We tried, but the enemy was too strong so we set up defensive positions so we could at least deny entry near the 1st Inf Div CP. On Feb. 11, 1968 we were withdrawn and flown to Saigon, our mission accomplished. We rested, refitted and then were sent to the defense of Saigon for a week.

The three parachute battalions that fought in Vietnam’s First Corps during Tet Offensive had 959 effectives when we started, then had 119 KIAs and 396 WIAS. That is war — a pity!

Best recommended read for fighting in Hue city during 1968 Tet Offensive is “The Siege At Hue” by George W. Smith, who was there.

The Rowan area MOAA welcomes all officers to join us from all services active, retired and reserve. We have a luncheon every other month and espouse programs that help homeless soldiers and those who need help. Call Tyrus Cobb, 704-279-1477.

Editor’s note: This report originally had Gary Applewhite listed as the author but Ty Cobb wrote it as he presented it. Applewhite is a former lieutenant colonel and is with the local Central Carolina Chapter of the Military Officers Association of American (MOAA).