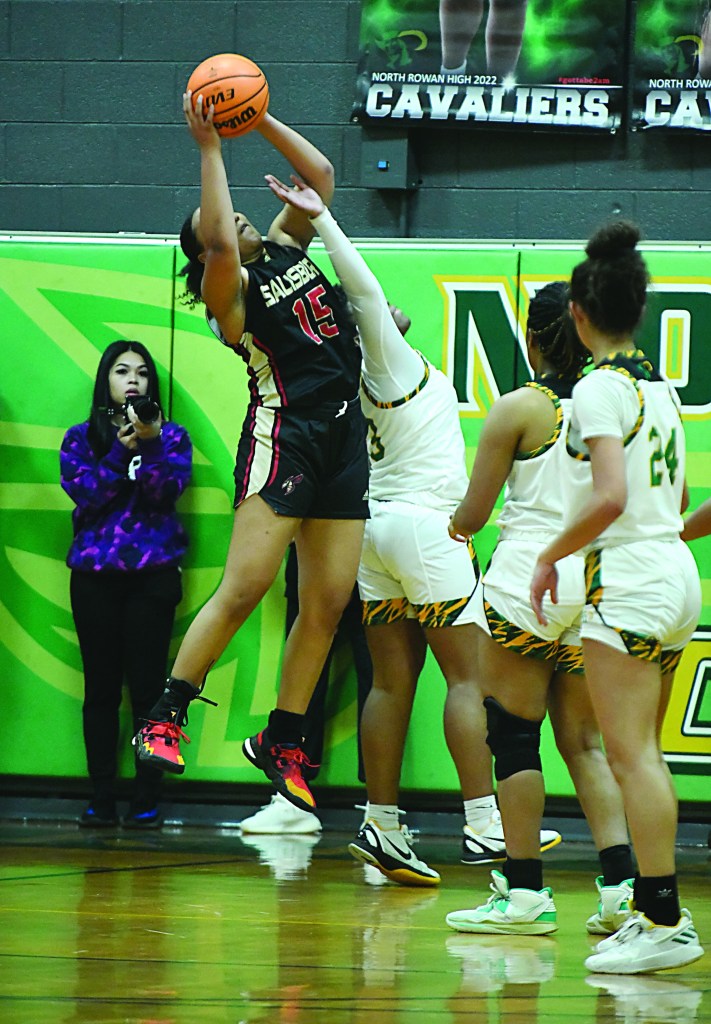 SPENCER — Kyla Bryant scored 33 points to surpass 1,500 for her stellar career on Friday, and the milestone occurred in a key game.

Bryant, who also had four assists, led the Hornets to a 58-41 win at North Rowan. The rivals entered the game with unbeaten records in the Central Carolina Conference.

Bryant, a senior who is one of 722 players (boys and girls) nationwide nominated for the McDonald’s All American Game, got off to a terrific start and lifted her team to a road victory. She had three 3-pointers and 21 points before halftime.

The Hornets (13-3, 6-0) led 16-9 after a quarter despite some hot shooting by North’s Brittany Ellis. The Hornets led 34-21 at halftime, with Bryant matching the offensive production of North’s entire team during the first 16 minutes. When Salisbury scored the first six points of the second half to go up by 19, it was over.

With shot-blocker Haley Dalton out with the flu, the Hornets had to play much smaller than usual. Shamya Arnold, a guard who stepped into the starting lineup, is about 8 inches shorter than Dalton, but she played tall. Arnold contributed some early offense and finished with seven points and seven rebounds.

“She loves rebounding and she loves doing the little things,” Salisbury coach Lakai Brice said. “That’s what I love about her.”

MaKayla Noble is always a tough matchup and had 11 points and 11 rebounds.

Mary Morgan tweaked an ankle early, but was able to return and took another charge.

Icesis Nwafor, who had six rebounds, keyed the defense for the Hornets. She had the assignment of containing North’s lightning-quick junior guard Bailee Goodlett, who scored her 1,000th point on Tuesday.

Goodlett, who came into the game averaging 27.1 points, scored only two in the first half. Nwafor sacrificed her own offense to stop her, and she did. Nwafor fouled out in the third quarter. Goodlett finished with 12 points.

A high percentage of Goodlett’s offense normally comes from layups and free throws off steals, but Salisbury wasn’t turning it over much. North (10-4, 4-1) had only two steals.

“When you’ve got Kyla handling the ball, it’s hard for our opponents to get steals,” Brice said. “Kyla had a zero-turnover night. Bailee is good at getting in the passing lane and then converting on the other end. She’s a great player, but we stressed limiting turnovers and we did a great job of taking care of the ball.”

Ellis made three 3-pointers and scored 11 in the first half. She  finished with 13 points and five rebounds.

Goodlett had seven assists and five rebounds, but no steals. Bloom Goodlett, her twin sister, made two 3-pointers. Dasia Elder had five rebounds.

Bryant is averaging 22.3 points and has scored 33, her career high, in back-to-back games. Bryant likes the North gym. She also scored her 1,000th point there.

She is now fifth in SHS program history with 1,507 points, but Brice, who is Bryant’s mom as well as her coach, seemed more excited about her refusal to turn the ball over a single time in an intense game.

“I love how Kyla is playing right now,” Brice said.