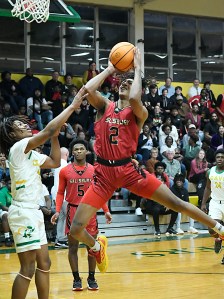 Harris was ridiculous in Friday’s 93-46 blowout of rival North Rowan. He scored off the tip and he never really stopped.

He had seven dunks.

He scored 12 points in the first minute of the game with three 3-pointers (he got fouled on one of them) and a dunk.

Salisbury coach Bryan Withers was in a good mood and summed it up, “Juke 12, North 2. It was an electric crowd and we took their crowd out of it right from the start.”

Harris had 21 points by the end of the first quarter. At that point it was 35-8, and the fight was over. The refs could have declared the Hornets winners over their Central Carolina Conference rivals by TKO.

Harris finished with 43 in the Salisbury scorebook, a career high even higher than the 42 he mauled South Davidson for in December.

You don’t get to talk about 43s much in basketball, unless you’re talking NBA jersey numbers. Mychal Thompson, now known as Klay’s dad, wore the 43 as did stellar big men Jack Sikma and Kevin Willis back in the day. Brad Daugherty was another famous 43. Of course, he wore the 43 to honor his own hero, Richard Petty, who sported the 43 on his blue Plymouth race car.

Now Harris, who wears No. 2, will be remembered as the man who scored 43 against North Rowan. Of course, he may get 44 his next time on the court.

It was a big game, not just for bragging rights, but as far as the CCC. North (8-8, 3-2) was still undefeated in the CCC entering the week, but got upset at Lexington and wasn’t able to regroup in time to challenge the Hornets.

Withers acknowledged that Harris had a stellar offensive game, but mostly he wanted to talk about Salisbury’s defense. Harris contributed blocks and steals.

“I think people talk about the points we score, but our defense gets overlooked,” Withers said.

Salisbury can defend well. Mike Geter, Deuce Walker, Hank Webb, Dashawn Brown and Jalen Chunn can contribute points, but most would agree they are better defensively than offensively.

North has a lot of athletes, some of them streaky shooters, and to hold the Cavaliers under 50, even with a running-clock fourth quarter, is impressive. North has put some 90s on the scoreboard in recent weeks.

Naejone Whitney scored 20, 14 in the second half, and posted a double-double for the Cavaliers, but most of his teammates had an off night. Give Salisbury’s defense some credit for that.

“We got after it pretty good,” Withers said. “We did a nice job of containing George Maxwell (who scored 42 recently), and didn’t let him get going. We took charges. We got on the floor for loose balls.”

Everything came together for the Hornets (11-5, 5-1). Jonathan Ross made two 3-pointers. Three other Hornets made one each. Salisbury had season-high offensive production combined with one of its best defensive outings.

If you’re wondering how in the world Salisbury could have lost five times, they played a few games (including a CCC loss at Thomasville) without Brown, who provides a lot of their rebounding. They also played a mission-impossible December schedule, taking on strong 4As such as Olympic and Chambers on the road.

But against schools their size or smaller, the Hornets should be very tough as the season moves forward.

“People are seeing now why we played the kind of non-conference schedule that we did,” Withers said. “Early in the season we were a team that was free-lancing too much, but we’ve grown a lot. We’re playing together better. We’re getting out and scoring in transition better. We’re sharing the ball better.”

And Harris is still getting better. That’s 478 points for him in 16 games, 29.9 points per game. That’s a county-record pace.

For North coach Jason Causby, it’s back to the drawing board.

The Cavaliers have only had Whitney and Dyzarious Carpenter in the lineup for the last seven games and they added Amir Alexander to the mix for the last two. Alexander was a good player for the Cavaliers last season. He transferred to Winston-Salem Christian, but now is back at North.