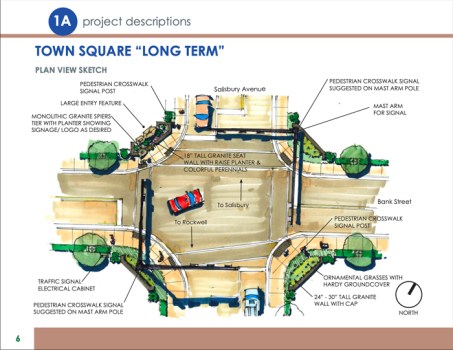 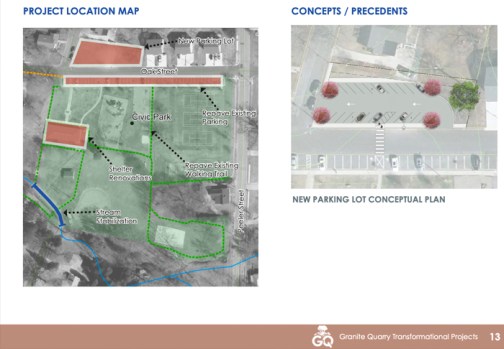 A project map of the recommended improvements to Granite Civic Park. There is also a concept sketch of the new parking lot that will be built across from Oak Street. Stewart Inc., a consulting firm, provided these renderings during Thursday's special meeting. 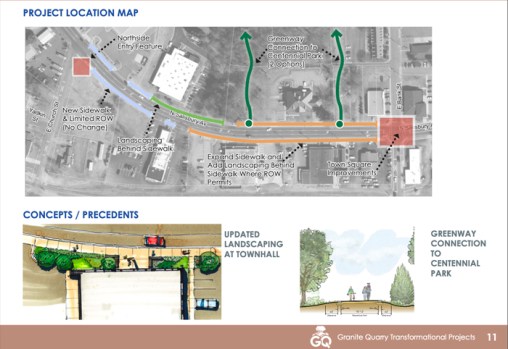 Stewart Inc. image — This map shows improvements planned for the Salisbury Avenue Streetscape, which would include new landscaping at town hall and a multi-use path connecting Salisbury Avenue and Centennial Park. 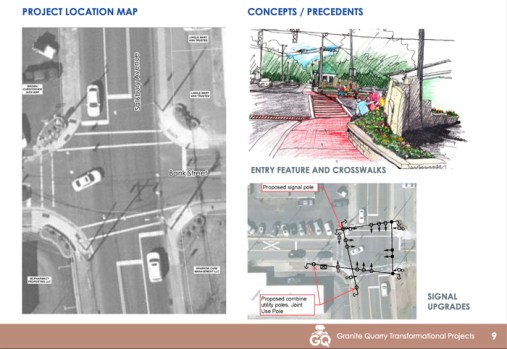 A map showing the location of recommended improvements to Granite Quarry's town square. There is also a concept sketch for the decorations of the new entry feature. Stewart Inc., a consulting firm, provided these renderings during Thursday's special meeting.

GRANITE QUARRY — The mayor and board of aldermen held a special meeting Thursday morning with consulting firm Stewart Inc. to discuss recommended projects to improve the town’s infrastructure and Civic Park.

Projects would include improvements to town square, Salisbury Avenue and Granite Civic Park. The board will receive a feasibility study from the consulting firm, which will determine final scopes and costs.

After board members receive the study and proposals, they will make a decision on which parts to go through with. Here are details on the projects.

These projects for Granite Quarry’s town square at the intersection of Salisbury Avenue and Bank Street include upgrades to crosswalks and signals, as well as a new entry feature. This is the only signalized intersection and “serves as a southern gateway to town,” according to the presentation shown at the meeting.

• The existing painted crosswalks will be replaced with stamped concrete crosswalks, with better color and texture. The crosswalks will be more defined and help with pedestrian crossing, slowing traffic and improving safety. The project will also include push button signals for those crossing the street.

• Mast-arm signals will also be built to replace the current hanging street lights. A signal pole will be replaced on the northwest corner and two utility poles will be combined on the southwest corner to a joint-use pole.

• Oversized and decorated street signs will be installed.

• Underground utilities from East Church St., to East Bank St., are also included in the project. The utilities could be placed under the sidewalk or under parcels of the railroad on the right of East Bank St.

• An 18-inch granite seat wall will be added on the right sidewalk of Salisbury Avenue with planters and a planting bed for flowers. Lighting will be placed in front of the granite wall. Other decorations will be placed on the rest of the corners of the intersection.

These upgrades are not set in stone and more study needs to be done to see if the improvements are practical. Other next steps include identifying funding, more surveying, utility coordination, more detailed design and then construction.

The projected total cost would be between $5.5 million to $9 million.

This project includes upgrades to the Salisbury Avenue streetscape between Church Street in the north and East Bank Street in the south.

• Installation of up to 720 feet of curbs and gutters with a sidewalk.

• Addition of landscaping at the Town Hall property. Low hedges, decorative grasses and street trees will be planted with furnishings and pedestrian lighting. Benches and/or a low wall could be mixed in with hedges or grasses.

• The existing sidewalks will be expanded 6 inches from the Granite Quarry Town Hall to East Bank Street on both sides of Salisbury Avenue. The curbs will also be rebuilt.

• Designs and construction for a multi-use path between Salisbury Avenue and Centennial Park.

The projected total cost for these improvements is $884,000. Next steps include identifying funding, surveying, more design and then construction.

Granite Civic Park will also see upgrades and improvements. The park is located in downtown Granite Quarry at the intersection of Peeler and Oak streets.

• Civic Park’s shelter will be renovated to remove the shelter’s kitchen area. The restrooms will then be expanded to provide three to four additional stalls in both the men’s and women’s restrooms.

• A site specific master plan will need to created prior to major facility changes. This plan will clarify relationships with adjacent properties.

The projected total cost will be $1.1 million. Next steps for the park include prioritizing certain parts of the project, identifying funding and applying for grants.