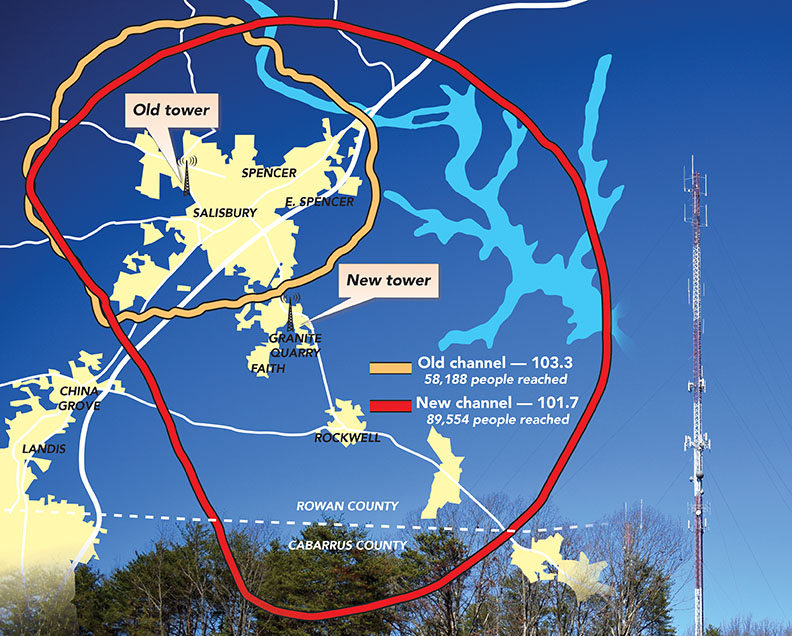 Photo by Charlie Drape, graphic by Andy Mooney/ Salisbury Post This map shows the coverage comparisons of the two radio channels. The green line shows the coverage of the current channel, 103.3 FM. The red line shows the much larger coverage the new channel, 101.7 FM, will be able to reach. The new 723-foot WSAT radio tower, nicknamed Al’s Knob, located behind Granite Quarry Elementary. The station will change from 103.3 FM to 101.7 FM in the coming weeks.

SALISBURY — Radio station WSAT is planning to upgrade to a new, bigger radio tower located just behind Granite Quarry elementary school and switch from channel 103.3 FM to 101.7 FM in the coming weeks. The station’s AM channel, 1280, will remain the same.

The new radio tower, nicknamed Al’s Knob, is 723 feet tall and could serve close to 90,000 listeners. The tower’s signal reaches much further, going as far south as Highway 52, as far east as High Rock Lake, and could potentially reach as far as Lexington. Now, the radio station will be able to reach listeners in Granite Quarry, Faith and Rockwell.

The antenna is going was installed on Al’s Knob on Tuesday. The radio station is testing to see how far of an area the signal can cover. The goal is to have the signal up and running by Sunday, Poole said, and then listeners can get back to grooving to the station’s classic “memories” tunes. The station calls their selection of classic hits from the 1960s, 1970s and 1980s “memories” music, instead of what most people know as “oldies” music.

The current radio tower, located behind the WSAT office building, is much smaller — 263 feet and only reaches up to 58,000 listeners.

WSAT currently has around 30,000 listeners, but Poole hopes the new tower will increase that number to up to 50,000 listeners. On Christmas Day 2022, the station sold their 98.3 FM channel, which covers Cabarrus County, Concord and Kannapolis, to K-Love, a Christian music radio station.

Poole and his team worked with the Federal Communications Commission for around seven to eight months to get approved to move to the new tower. He said he was unsure whether the FCC would approve the deal, but was happy when they finally did. He hired a consultant from Bromo Communications, Inc., to look for a new tower in hopes of getting a bigger and better signal.

“We started looking and I said ‘We don’t have a problem switching frequencies if you can get us a better signal,’ so they started exploring,” Poole said. “They came back and said our best option would be 101.7 because there’s nobody around you within 50 miles and that means no interference, so our signal would be much better.”

Charles Wentz started WSAT in the 1940s, and at the time it was Salisbury’s second radio station. It was built in 1947 by Elbert Sherman, according to past Post reporting. Sherman worked as chief engineer of station WANK in Salisbury, one of the city’s first radio stations. April 25, 1948 was the official signing-on day for WSAT.

Harry Welch Sr. became the general manager of the station in 1953. For the next 50 years, Welch and his family ran the station. It was once known as “The Family Station.” Welch hired Poole in 1964 while he was a student at South Rowan High School. Poole worked as the sports director and broadcast the night time shows. He left the station in 1966 to serve in the military as a journalist, working in Nuremburg, Germany, on the Armed Forces Radio Network.

Poole worked in High Point for 18 years before returning to Salisbury to buy WSAT in 2002. He bought the station from Charlie Welch, the son of Harry and a past Rowan County commissioner. Poole owned the station for 12 years before selling in 2014 to Catawba College trustee and alumnus Bill Graham’s 2B Productions, Inc.

“This whole place has had a lot of personalities come through it over the years,” Poole said. He is excited for the move to the new tower and considers it a game changer for the radio station.

“It’s going to tremendously increase our coverage,” Poole said. “It’s a pretty big deal to change frequencies and move to a new tower.”