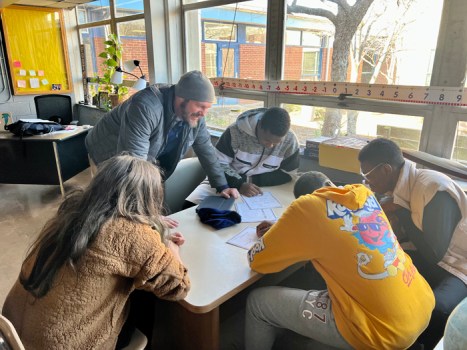 Although he will be taking his talents to central office, West Rowan High School Principal Dr. Jamie Durant indicated that he will be missing moments like one with culinary II students. Submitted photo 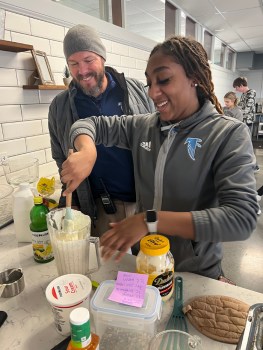 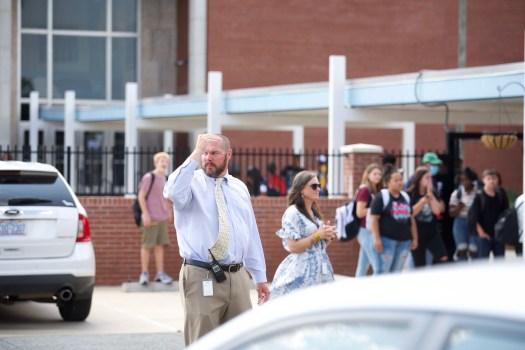 SALISBURY — West Rowan High School’s principal will be relocating to Rowan-Salisbury Schools central office, as he undertakes a new role.

The principal indicated that he is feeling good about the new position, but added that there is “always some anxiety” when leaving a role that one has been in for several years.

“You want to make sure you are making the best decision for all parties involved,” Durant said.

All anxiety aside, Durant is looking forward what he will be able to do for the district from central office.

“I am eager to join the team that (Superintendent) Dr. Kelly Whithers is establishing to continue to move our district in the direction it needs to go,” Durant said.

Looking ahead, Durant is preparing to adopt a larger scope of work.

“We have to make sure that we are able to meet the demanding needs we have with a lot of our employees,” Durant said.

The principal acknowledged that his new role involves more than just people, but projects too, so he is ready to hit the ground running and get up to speed on what RSS is doing at the district level.

“(It is not just) learning the current projects we have, it also means looking at the needs we have and making sure we align our goals to achieve all those,” Durant said.

While he has been the principal at West Rowan High since 2007, Durant’s administrative experience with Rowan-Salisbury Schools predates that position.

He was the principal at Southeast Middle School in Salisbury for two years. Before that, Durant was an assistant principal at West Rowan High. In total, he has been in an administrative position within the district for more than two decades.

“Dr. Durant has brought innovation and commitment to individual schools in our community for more than 20 years, and I’m excited for him to bring those talents to the district level to benefit all our students and staff,” Withers said.

Durant will fill the role being vacated by Anthony Vann, who plans to retire at the end of February.

Throughout the next few weeks, RSS will seek feedback from West Rowan students, staff, parents and the community about the school’s next leader.

“We are committed to finding a strong and innovative leader to continue the incredible things happening at West Rowan High School,” Withers said.

Next up will be finding Durant’s replacement at West Rowan High.