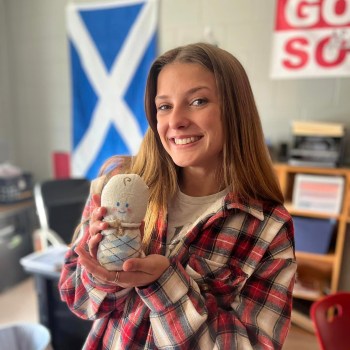 South Rowan sophomore Brinley Patterson was among AP psychology students to learn about cognitive development and parenting styles through a unique experiment. - Submitted

LANDIS — Learning about cognitive development doesn’t have to be all bookwork, as Advanced Placement  psychology students at South Rowan High are discovering this week.

Each sock baby was stuffed with pillow filling and given a human countenance. Then, the students were tasked with holding onto and caring for the baby.

“At first, the (students) were not sure about it,” Hopkins said. “There were a lot of stipulations like always having to have it with them. They could use a babysitter once a day for up to three hours.”

The students had to always keep their sock babies on them at school. However, holding onto them was just part of the project that featured various additional layers.

“They had to make a birth certificate for their sock baby,” Hopkins said. “They had to name them and identify how much they weighed at birth.”

According to Hopkins, they have learned about rearing children based on cognitive, psycho-social and moral development. The assignment also encouraged Hopkins’ students to think critically about parenting styles.

“They have a packet of information they have to fill out as they go along,” Hopkins said. “Sometimes, conflicts arise about what to do when your child throws a fit in the middle of a store, but they have to discuss and say how they would handle it.”

With each passing day, the sock baby ages until day seven, when it reaches adulthood.

“They have to deal with conflicts in each of those phases of life,” Hopkins said.

It might begin with chagrin, but Hopkins indicated that students come around.

“The kids start off like, oh no, we have to do this project, but it seems like they have enjoyed sending me pictures of their babies’ progress,” Hopkins said.