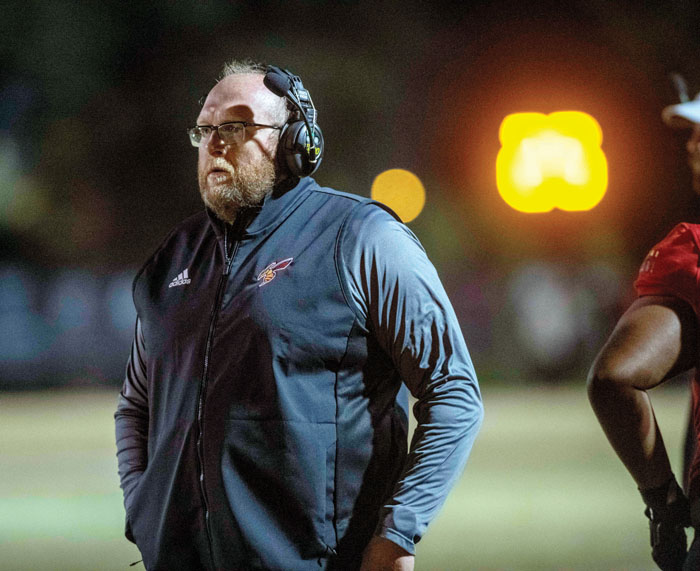 Brian Hinson says at West Cabarrus, ‘There’s a lot of building to do, a whole lot of work to do.’ File photo by JON C LAKEY / FOR THE SALISBURY POST. 11/5/21, Salisbury,NC.

Brian Hinson and Joe Nixon, former Catawba offensive linemen and two of the notable Rowan County head football coaches of this century, will square off next fall for the first time.

Hinson led East Rowan and Salisbury squads, while Nixon piloted North Rowan and West Rowan, but meeting No. 1 will come outside Rowan’s borders — when Mooresville plays West Cabarrus in a 2023 4A Greater Metro Conference game.

Nixon has become a popular fixture at Mooresville. Hinson was announced as West Cabarrus’ new head coach on Tuesday.

“It will be a while before we’re ready to compete with programs like Mooresville,” Hinson said. “There’s a lot of building to do, a whole lot of work to do.”

He could say that again. The West Cabarrus Wolverines were 0-10 last fall, including a 54-7 bludgeoning from Nixon’s Mooresville Blue Devils.

Still, the feeling from many people in Rowan County is that if it’s possible to win at West Cabarrus, then Hinson will do it.

He has made believers out of even the most skeptical.

He’s good. He’s good at motivating, good at putting a staff together, good at strategizing.

He cares about athletes like they’re his own kids. Players can sense when a coach loves them. They’ll run through walls for him.

Hinson has a fine track record as a builder and rebuilder.

Decades of history tell us how hard it is to win in football at East Rowan. The Mustangs are 131 games below .500. Hinson’s three seasons there included one struggle, but also a 7-5 and a 9-4.

His success at Salisbury was off the charts. Salisbury almost always has athletes, but Hinson knew what to do with them.

His last SHS team in the fall of 2021 went 11-1 and set county records for offense and defense.

He surprisingly stepped down after that, retaining AD duties, but giving up football. The main reason he offered was family considerations. He wanted to watch his two daughters play sports. He was tired of missing their games.

He’s back now. Refreshed and rejuvenated. Ready to coach again.

“The year off was good for me,” Hinson said. “But I miss coaching and my family misses me coaching football. I like coaching a lot more than being an AD.”

The pay scale for coaches is stronger in Cabarrus than in Rowan. Hinson will make as much as West Cabarrus’ head football coach as he makes as Salisbury’s AD, and he won’t have to worry about all those other sports.

Hinson said he won’t have to move his family. West Cabarrus is in Concord, close enough to commute from Rowan.

“It will be an extra 20 minutes on the drive,” he said. “It’s 27 minutes from door to door, from my house to West Cabarrus.”

Hinson is a native of Montgomery County. He starred at East Montgomery High. Catawba College was lucky enough to recruit him. He exceeded all expectations as a player because he’s smart and because he’s got a stellar work ethic. He made All-America teams. He’s in the Catawba Sports Hall of Fame.

His diverse coaching background includes a stint as a North Rowan assistant in his early days, as well as many years of experience as a college offensive line coach at Coastal Carolina and Catawba.

He was believed to be one of the leading candidates when Catawba was recently seeking a new head coach, although that search went in a different direction.

That may work out for everyone, including Hinson.

His calling is coaching high school athletes. That’s where he can make the greatest impact on the largest number of people.

He’s continuing as Salisbury AD for now, but the plan is for him to leave Salisbury for West Cabarrus in February.

At West Cabarrus, he’ll embrace the challenge of competing in a 4A league with  Mooresville, Lake Norman, Hickory Ridge, Cox Mill, A.L. Brown and South Iredell.

His oldest daughter, Elinor, is a good athlete who has been a factor for Salisbury track and field and volleyball.

Hinson said the plan is for her to join him at West Cabarrus.