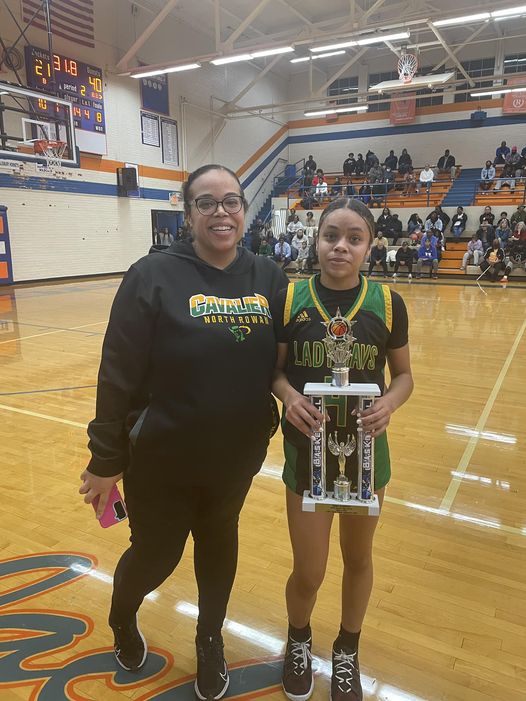 The speedy junior may have had the slowest start she’s ever endured on Tuesday night, but when the dust settled and the smoke cleared she owned a new career high 0f 36 points and she also had 1,000 points for her career.

North’s 83-59 Central Carolina Conference win against a pretty fair Lexington team was one for the books in a lot of ways.

Adding to the spectacle, North junior Brittany Ellis made eight 3-pointers and scored 27 points. If you wanted an assist, all you had to do was throw the ball to Ellis at the 3-point line. She was more than willing to do the rest.

Goodlett only got to score 129 points as a freshman because North was limited to 12 games by COVID.

She scored more points than anyone in the county last season — 534 — mostly because she gets an incredible amount of steals and layups.

She is scoring at a crazy, dizzying pace this season. That continued on Tuesday when she topped 30 points for the fifth time.

But back to that slow start.

Lexington coach Robert Hairston knows defense and he put tall, rangy defender Jadyiah Peoples on Goodlett. Her job was to stay in front of Goodlett when North had the ball in the halfcourt, and Peoples did that. Lexington was also taking care of the ball well enough that Goodlett wasn’t getting any breakaway points off her defense.

Goodlett needed 20 points for 1,000. She had just two after the first quarter, but that wasn’t a major problem for North. Ellis was carrying the load. Ellis scored nine in the first quarter. When Krisstyle Stockton scored on a rebound to close the period, the Cavaliers led 15-11.

Her teammates started some breaks for her with outlet passes after defensive boards. She got some long rebounds herself and that’s always an instant fast break because she can go. She got some deflections. She got some steals. She yanked one ball away from a startled Yellow Jacket and took off. She turned the last four minutes of the half into a non-stop circus of layups and whistles and free throws. After she scored with 31 seconds left in the half, that made it 1,000 for her career, and she was presented with a silver trophy roughly the size of Arkansas, while teammates mobbed her.

Ellis was on and rained five more 3-pointers in the second half. Some were from 25 feet.

Goodlett made five 3-pointers for the game, with four in the second half. She made three bombs in the fourth quarter, probably just to show people she could. While steals and layups definitely are her thing, she shoots the ball accurately. She made her final 3-pointer with 56 seconds left for the Cavaliers’ last points.

Coach Darra Walker left her in for every second of the victory, and she soaked up a memory she’ll carry for the rest of her life.

Ellis sat down with 3:47 left or she might have knocked down another one or two from the parking lot.

Bailee’s twin, Bloom Goodlett, also had her moments. She made a 3-pointer and scored 12 points.

Chloee Stoner had seven rebounds and some of those turned into Bailee Goodlett fast breaks. Stockton had six rebounds.

North hosts Salisbury in a big CCC game on Friday.