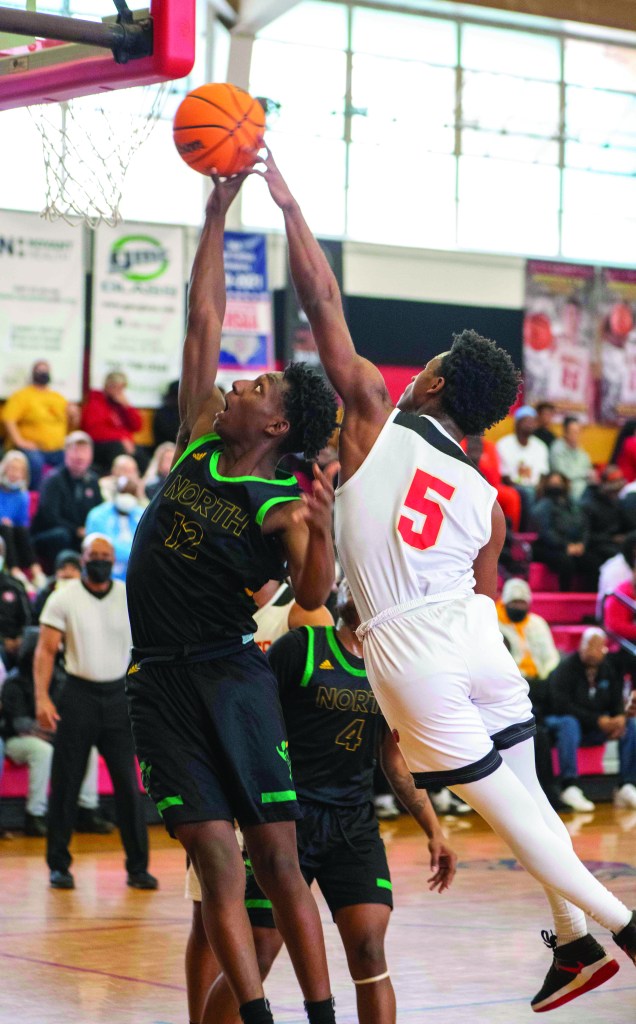 But the Yellow Jackets played a tenacious game on Tuesday night on their home floor, shot a lot of transition layups, made the key plays and knocked off the Cavaliers 70-67.

It’s important to make Lexington shoot the ball. North really didn’t. Salisbury did last Friday in the SHS gym and crushed the Yellow Jackets (6-9, 2-3) in the second half.

“Our defense was poor tonight,” North coach Jason Causby said. “Just not up to par with what our defense has been.”

North came into the game unbeaten in the Central Carolina Conference and on a serious roll, putting up 90s and looking really athletic and  deep, but this was a classic can’t-get-over-the-hump night.

George Maxwell missed some, but he shot the ball very well from long distance again. He made seven 3-pointers and scored 23 points.

After Maxwell, it was a committee of scorers for the Cavaliers. No one got hot, but a lot of guys contributed at different times.

Lexington got 27 points from Kimoni Small, a hard-working forward with a nose for the ball.  It was sort of a quiet 27, but he was constantly making layups.

Lexington jumped out 11-0, and that was big as far as building confidence for the Yellow Jackets.

“Slow start and had to fight back and just never could pull ahead,” Causby said.

North didn’t scratch for almost four minutes at the outset. Finally, Maxwell hit a 3-pointer. Then he hit another one.

By the end of the quarter, Maxwell had four 3s in the book. North trailed 22-15.

North’s defense tightened up some in the second quarter, but the Yellow Jackets still took a 35-30 lead to the break.

North came close to taking charge in the third quarter. A three-point play by Jayden Polk made it 40-all with 5:13 left in the period, and North finally had overcome that early hole.

North had several possessions with a chance to get the lead, but failed to convert. By the end of the quarter, Lexington had weathered a serious storm and was back in front, 53-48.

“Just too many turnovers when we had fast breaks — and at critical moments in the game,” Causby said.

North got within 56-55 in the fourth quarter, but Ja’Merion Wafford answered with a 3-pointer for the Yellow Jackets that was one of the biggest shots of the night.

With North down seven with 1:26 left, Amari McArthur made a 3-pointer to keep North alive.  With a minute left, Maxwell’s 3-pointer sliced the Yellow Jackets’ lead to 68-65.

Naejone Whitney got a layup after a North steal for 68-67 with 28 seconds left.

North then forced a turnover and had the ball with a chance to win with a bucket.

The Cavaliers were patient. They got a decent shot. McArthur had a pretty look at a 3-pointer from the right wing with about 5 seconds left, but it didn’t fall.

Lexington guard Jaylon Henderson got the long rebound in the lane. North had to foul him and his two free throws set the final margin.

North got off a prayer prior to the horn, and Jericcho Charleston drew iron on his last-gasp effort to force overtime.

“We have to regroup and we’ve got to do it quick,” Causby said.