All aboard! Kannapolis authorizes plans for new train in Village Park 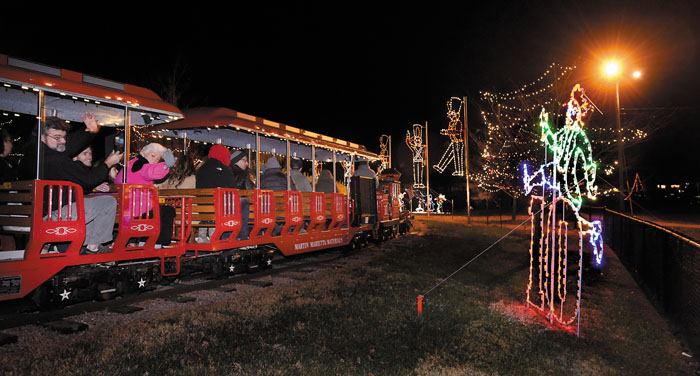 Passengers ride the ‘Winterland Express’ at Village Park in Kannapolis at an earlier Christmas Celebration of Lights ceremony. File photo by Wayne Hinshaw, for the Salisbury Post

KANNAPOLIS — Kannapolis is trying to get back on track this year when it comes to the train at Village Park. The city council has approved a plan to purchase a new train to operate alongside the city’s current one.

Mayor Darrell Hinnant  requested the topic be added to the business agenda at Monday night’s meeting. The train in Village Park had been out of service during part of the city’s Celebration of Lights and Winterland Express events.

Maintenance issues were blamed for the train not being available throughout the year, even before the holidays.

“Now’s the time to make a decision to buy a new train and to put the two of them together on the track during peak periods and salvage this older train and make it last longer. So, it’s part of the economic development. There’s no telling how many people have said to us that they come here because of our parks and our recreation and the amenities that we offer,” Hinnant said.

The mayor had previously spoken to City Manager Mike Legg about figuring the cost of “a solution to this problem.”

“We’re furthest away from the holiday season as you can get right now and it’s seven to nine months to get all that in place probably, pushing almost a year. If you wanted to ensure that we don’t get in the same situation,”  Legg said during the city council meeting.

The current train’s engine is 30 years old and was bought used. It has since been repaired, but the entire train will have an “overhaul” so it will be fully operational this coming year.

The plan is to have the new train be the main one while the other would serve as a backup. Both would be used simultaneously during the busy holiday seasons.

Total cost for the project would be about $600,000. That includes the new train, repairs, siding and shelter.

Legg and Parks and Recreation Director Gary Mills will work together to conceive a plan “so that we can get that train here as quickly as possible,” according to Hinnant.

The train is housed in the Rotary Station of Village Park in Kannapolis.