Director of Rowan Museum new to job, but not to museum, or the love of history 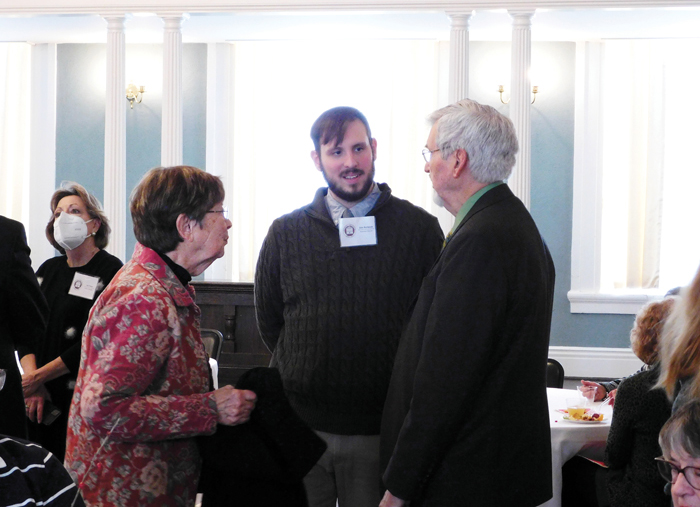 New Director of the Rowan Museum Evin Burleson talks during Sunday's meet and greet with residents Dottie and Geoff Hoy. Geoff is the chair of the Rowan Democratic Party. Burleson said about half of the people he met Sunday were new to him, and he's excited about new connections. Photo by Elisabeth Strillacci

SALISBURY — The newly-appointed Director of the Rowan Museum Evin Burleson is new to the job title, but not to the museum, or to a love of history that has been a part of who he is for as long as he can remember.

Burleson has been a curator at the museum for six years, under the leadership of former Director Aaron Kepley, who left the post last year. It was not the first time the two men had worked together. Burleson worked under Kepley at the Reed Gold Mine before Kepley moved to the Rowan Museum. When Burleson was furloughed, Kepley offered him a position curating exhibits in Rowan, and Burleson has not looked back.

“I’ve always loved history, ever since I was a kid,” Burleson, 29, said Monday. “My parents thought I would be a history teacher from the time I was in kindergarten,” he laughed. Initially he attended Wingate College where he spent a year studying to be just that, a history teacher, but after coming down with one illness after another spending time in the classroom, he decided to change his focus. He transferred to UNC Charlotte where he graduated with honors from the history program as an undergraduate, with a focus on Native American and Early American studies. He is currently working on his master’s degree with a concentration in public history.

There were other applicants for the director’s position, but Burleson said his heart “was really hoping to be selected. I have realized what we can do, what we have done, and what we can do going forward,” he said. He is driven to create a museum that celebrates “all of history, not just what so many museums tell which is the white man’s history. That’s certainly important, but there is so much more to history. Everyone should have a piece of the story, should be able to see themselves in the history a museum shares.”

The museum itself is based in the former courthouse on North Main Street, right next to the existing courthouse. That building was the original Rowan court, then it became the county commissioners’ meeting house. Today, much of the original design or the redesign for the commissioners remains, including a balcony over the meeting room that encircles the entire room, looking down over the meeting space and providing room for an audience to the former meetings. In addition, the museum owns or operates three other properties: the Old Stone House, the Utzman-Chambers House, and the China Grove Roller Mill.

Burleson said his goal is to broaden the community connection for the museum, by increasing both the number and type of events.

“We have lectures, and the attendees at those can be slightly older, but we have the Germanfest that is aimed at a wider age group including families with children,” he said. “We also this year reworked our summer camps. Many families had trouble committing to a full week, with vacation plans and that sort of thing, so instead we held camp one day a week throughout the summer, and that worked out much better. Our attendance increased and financially we did just as well as when we had a week-long camp.”

There are historical classes offered through the museum as well as a History Club, which meets every second Tuesday at 7 p.m. and which has the option to explore a wide range of topics.

Burleson just married his wife, Sarah, in October, and said he is fortunate indeed that she, too, is a history buff and very supportive of his career, because he has realized the job takes a lot of time, with night and weekend events. His parents, who still live in Albemarle where he grew up, are also proud and supportive.

“Evin has basically been taking care of us in the interim, and as a curator, so we are very pleased to have him continue with us,” said Chairman of the museum’s Board of Directors Norman Ribelin. “We have a wish list, and we hope to increase our financial support base,” because one of the major projects going forward is to create an area in Rowan similar to Old Salem. The museum owns between 15 and 20 acres surrounding the Old Stone House, and the plan is to turn it into a historic development.

During a meet and greet for Burleson Sunday afternoon at the museum, the former (and first) Exective Director Kaye Brown Hirst said she looks forward to continuing to work with Burleson.

“He and I have worked closely together because I still do a lot of volunteer work, helping collect donations from people,” she said. “Last week a family wanted to donate some quilts from the ’20s and ’30s, and I called Evin and asked him to meet me at the door because I had a car load!”

Burleson said his overarching goal is “a stronger, more united community, with input from people across the spectrum.”

“I have had people call and ask me about speaking, and I am always willing to talk about history,” he said. “If they have open minds and open ears, I will come and talk, and keep talking as long as they let me. We want to tell everyone’s story, we want a diverse museum that represents everyone.” To kick things off, Burleson said in February, there will be a tremendous women’s exhibit.

The museum will celebrate its 70th birthday this year, and Burleson said there will be a celebration but the plans have not been ironed out yet. But the annual meeting is Jan. 26, and he said the public is welcome, and a meal will be provided.

“You don’t need to be a member to come,” he said. “Join us for a bite to eat and a progress report, find out a little more about what we do.”