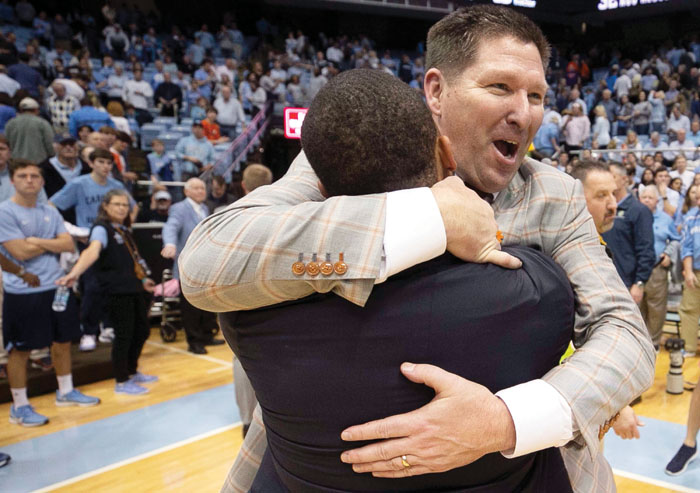 Clemson coach Brad Brownell has the Tigers as one of the new leaders who have the bluebloods of the ACC taking notice. (Robert Willett/The News &Observer via AP, file photo)

Brad Brownell isn’t quite ready to go there. A decade-plus of trying to lead Clemson out of the ACC’s muddled middle class has taught the Tigers’ longtime coach it is best not to get ahead of yourself. Especially in January.

Brownell said he is not paying too much attention to the standings, even with his team — picked to finish 11th during the preseason — looking down at everyone else.

“It’s way too early for all that,” Brownell said moments after the Tigers put together a dramatic late rally to beat Pitt in a 75-74 victory that left Clemson (13-3, 5-0) as the lone ACC team still unbeaten in conference play.

The Tigers have shown a grittiness and maturity that could serve them well over the next two months in a topsy-turvy conference where the bluebloods appear to have been joined by new blood.

Preseason No. 1 North Carolina is still trying to find its footing after a nightmarish start. No. 24 Duke is searching for an identity in year one of the post-Mike Krzyzewski era. No. 13 Virginia found itself overwhelmed in the second half last week against Pitt.

All of this is good news for a conference that saw just four teams reach the NCAA Tournament last season.

The Panthers have already beaten the Tar Heels and Cavaliers. Another chance for the program to distance itself from its forgettable recent past comes tonight when Pitt (11-5, 4-1) visits Duke (12-4, 3-2).

“I think the league is a lot deeper this year,” first-year Blue Devils coach Jon Scheyer said. “It’s a lot deeper and really, it’s never been where you can go somewhere and you can just check it off where you’re going to win. But this year in particular you see teams beating up each other.”

Clemson and Pitt have taken very different paths to relevance.

The Tigers are almost completely homegrown, a throwback approach in an era dominated by the prevalence of the transfer portal. Guard Brevin Galloway, a graduate transfer from Boston College, is the only starter who hasn’t spent his entire collegiate career at Clemson.

Contrast that with the approach Pitt coach Jeff Capel has taken in his fifth season. Six of the Panthers’ top seven scorers are transfers, four of whom — guard Nelly Cummings (Colgate), forward Blake Hinson (Mississippi, Iowa State), Greg Elliot (Marquette) and Federico Federico (Northern Oklahoma) are in their first year with the program.

“They do things the right way,” Virginia coach Tony Bennett said after watching the Panthers pick apart the Cavaliers in front of a small but vocal crowd at a somewhat rejuvenated Petersen Events Center. “Obviously I don’t know many of the players. (Capel) is off to a good start. For his sake, I hope he keeps it up.”

So does Capel, who has flirted briefly with success since taking over a massive reclamation project in 2018. Following a home win over Duke in 2021, then-forward Justin Champagnie proclaimed the Panthers were back. Pitt then lost eight of its next nine games.

The current Panthers are not only different in makeup — only two players remain on the roster from the 2020-21 group that finished 12th in the ACC — but in temperament. The rotation is filled with guys well into their 20s, many of them well aware this is their last chance to make an impact in their college careers.

Getting players from different backgrounds with little collective experience to buy in can be difficult. In an effort to speed up the process, Capel organized more team-building meetings in the fall.

An assistant coach suggested players send in pictures of important moments in their lives. During a meeting, the picture would flash on the screen and the player would talk at length about the moment and what it meant to them.

The players are taking it upon themselves to do some of the work on their own. There were frequent watch parties during the World Cup. It’s not unusual for the Panthers to show up early to practice and linger in the players’ lounge afterward.

That bond was tested early. Highly coveted recruit Dior Johnson is redshirting after pleading guilty to two misdemeanor counts of domestic violence stemming from an incident in October. Center John Hughley is not playing for unspecified reasons.

Yet Pitt has recovered after a nonconference schedule that included getting bullied by Michigan and West Virginia. The Panthers are 9-2 over their last 11 games, with both losses coming by a single point, signs of mental toughness that other teams during Capel’s tenure lacked.

“It doesn’t give me comfort, I’m not comfortable,” Capel said. “I am optimistic and hopeful that, you know, all of us can learn from the past.”

Especially when the present — for Clemson and Pitt, among others, in a parity-driven league — is so bright.