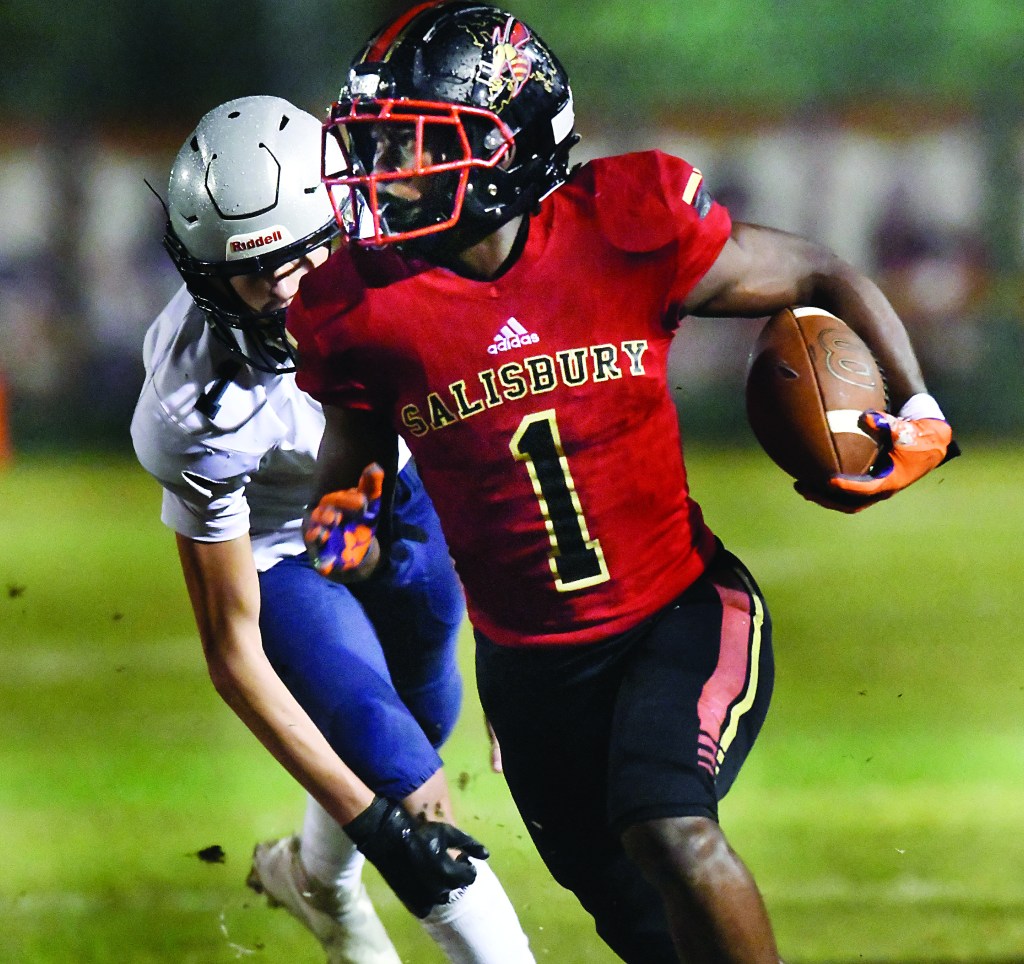 Salisbury junior Deuce Walker was named as one of the top eight defensive backs at the recent Adidas National Combine.

Players were rated by a panel of coaches and former NFL players.

A sprinter who is still growing, Walker is getting close to 6 feet tall and weighs about 175 pounds.

The son of former Catawba head coach Curtis Walker, he already has offers from Duke, Kentucky, Maryland, Charlotte and Campbell.

Recruiting interest is certain to heat up, with N.C. State, Coastal Carolina and Appalachian State among the schools that are interested.

Walker’s older brother, Jalon, is a freshman member of the Georgia Bulldogs team that rolled to the national championship on Monday.

The N.C. State graduate headed to Tulane after 11 years at Marshall.

His first football season at Tulane was an exciting one. Tulane enjoyed the biggest turnaround in FBS history, going from two wins to 12 in one season.

The 12th win was the 46-45 victory against Southern Cal in the Cotton Bowl.

Corriher joined Tulane’s administrative staff in June of 2022 after 11 years as assistant athletic director at Marshall, where he oversaw strategic communications, media relations and sports information efforts for all of the Thundering Herd’s 16 sports.

At Tulane, Corriher oversees a staff of two full-time assistants and two graduate assistants in the coverage of all 17 sports. He serves as the primary media contact for the Green Wave’s Athletic Administration, the football team plus men’s and women’s tennis programs.
•••

Junior Champion Hayden, a college prospect, had 25 points and 16 rebounds in North Hills’ 80-66 win against Rockwell Christian on Monday.

Tickets for Friday’s Salisbury at North Rowan basketball games are by pre-sell only.

No tickets will be sold at the game.

Tickets can be purchased at the front office of either school from 8:30 a.m. to 3:30 p.m. today, Wednesday and Thursday.

Tickets are $7 and only cash will be accepted. You must present your ticket on Friday night for entry.

Bryant is closing in on 1,500 career points and will make more progress toward that milestone on Wednesday when the Hornets host West Davidson.

The varsity boys game should be exciting. North (8-6, 3-0) has been a different team since adding Naejone Whitney and Dyzarious Carpenter and has won four straight games. The Cavaliers have averaged 90 points in their last four games. George Maxwell staged one of the great scoring games in school history in a road game on Friday, making 10 3-pointers, six in one quarter, and pouring in 42 points.

Salisbury (9-5, 3-1) has highly recruited Juke Harris, the county’s leading scorer at 28.7 points per game. Harris has scored more than 400 points in 14 games and is scoring at a county-record pace. The Hornets also have a lot of defense. They held Lexington to two field goals in the second half on Friday.

North enters the week tied for first with Thomasville. Salisbury lost a tight game at Thomasville.

West Rowan’s basketball teams enter the week on a roll.

It’s possible they won’t be seriously challenged during the regular season. They look to be head and shoulders above the rest of the South Piedmont Conference.

West plays at Central Cabarrus tonight. Central (9-5, 4-1) is in second place after escaping East Rowan with an overtime win on Friday.

West’s boys (6-5, 3-1) will take a six-game winning streak to Central Cabarrus, but that will be a tall order for the Falcons. The Vikings (15-0, 5-0) have been devastating league opponents with relentless pressure defense and quick, high-percentage offense.

The four Rowan teams are winless against the three Cabarrus teams in SPC boys basketball this season.

East or Carson (6-6, 0-4) will get its first SPC boys win tonight. Those teams square off in Granite Quarry.

East (3-9, 0-4) has Tee Harris, a senior who would be leading Rowan County in scoring in just about any other season except this one. Harris averages 25.2 points per game.

It’s a very big week for both East teams, with county match-ups against Carson, and then South Rowan (Friday).

East’s girls (7-6, 3-1) own big wins against Northwest Cabarrus and Lake Norman Charter and will be favored in both games this week. Hannah Waddell had a 26-point game on Friday, including a 17-point fourth quarter.

The bad news for the Mustangs is that Mary Church will miss the rest of the season.

A Monday MRI revealed that Church has a growth plate issue in a knee that will require surgery to remove a bone.

She’ll have a three-month recovery period from surgery.

The sophomore was East’s No. 2 scorer. She transferred to East after playing her freshman season at Gray Stone.

While there’s a long way to go with basketball, Swimming and wrestling seasons are nearing their peak.

The Rowan County Swimming Championships are set for Tuesday, Jan. 17, at the Hurley YMCA.

Regional competition will be held for qualifying swimmers the following Tuesday.

The dual team state playoffs for wrestling begin with two rounds on Jan. 28. Wrestling host teams are generally determined by central-location geography, not records, so it’s not known yet if West Rowan (15-0) will get to host.

The individual wrestling regionals to determine state participants are scheduled for Feb. 10-11.

South Piedmont Conference wrestlers will be competing at North Davidson.

The indoor track state championships are set for Feb. 10-11 in Winston-Salem.

Saturday’s home games at New Trent Gym have been scheduled as a “Black Out” Day to honor the memory of Eric Henderson, the Livingstone player who was killed in accident over the Christmas break.

Fans are urged to wear all black.

Livingstone’s women’s team opens the doubleheader against Claflin at 2 p.m.

The Blue Bear men will take on a hot Claflin team at 4 p.m.

One of the standouts for Claflin is former Jesse Carson High guard Jailen Williams.

Williams, a 6-foot guard, is one of the leaders for Claflin in every statistical category. He was the CIAA Player of the Week recently after posting a 25-point game in an overtime win.

Both Catawba basketball teams are thriving.

Catawba’s women (11-3, 5-1) beat rivals Lenoir-Rhyne and Wingate last week and are in first place in the Piedmont Division of the South Atlantic Conference.

Catawba guard Lyrik Thorne is the SAC’s leading scorer with 19.5 points per game.

Janiya Downs (South Rowan) was big in the wins against L-R and Wingate, scoring 19 and 16 with good percentages.

Catawba’s men (9-4, 4-1) are tied for first place in the Piedmont Division with Wingate and have won three exciting games in a row over Wingate, Virginia Union and Lenoir-Rhyne.

Pfeiffer freshman Hannah Isley (Carson) had a double-double with 11 points and 10 rebounds in Sunday’s 67-66 loss to Meredith.

Meredith got an extraordinary performance from Kate Perko, who made the game-winning shot. The former East-West All-Star had 34 points and 22 rebounds.

The 5-foot-11 Perko, who averages 15.5 points and 14.3 rebounds for the Avenging Angels, is the daughter of former A.L. Brown and Wake Forest star Amy Privette Perko.

Fourteen of Perry’s 17 field goals this season have been 3-pointers.

Columbia International University freshman Hannah Wilkerson (North Rowan) scored a career-high 25 points in a recent outing against Kentucky Christian and is averaging a team-high 13.2 points and 4.9 rebounds for the Rams.

Bryanna Troutman (Salisbury) is averaging 11.2 points and 5.8 rebounds for Wingate.

UNC Asheville’s Abigail Wilson (West Rowan) averages 5.9 points and 3.9 rebounds. She’s been the best percentage shooter for the Bulldogs. She’s at 45.2 percent from the field and is a 90-percent free-throw shooter.