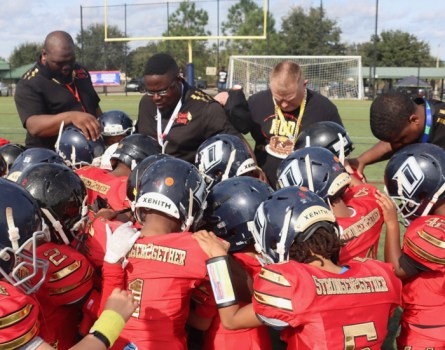 Coach Craig Johnson of Free Smoke Elite says, ‘Sports can build long-term friendships, lasting relationships. It’s a very good thing to be able to give a young person something to play for.” — Submitted photo 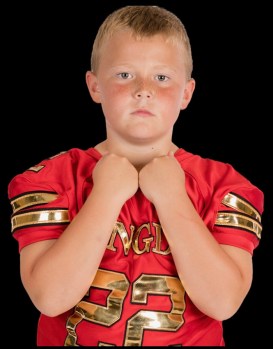 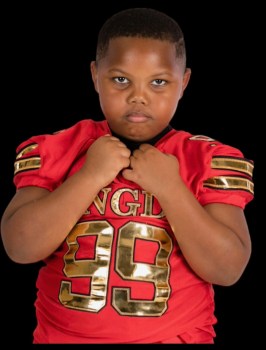 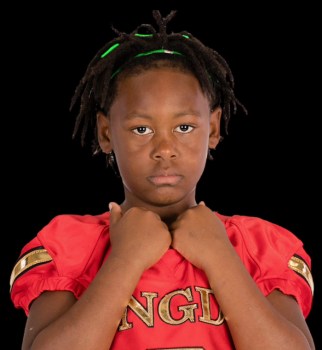 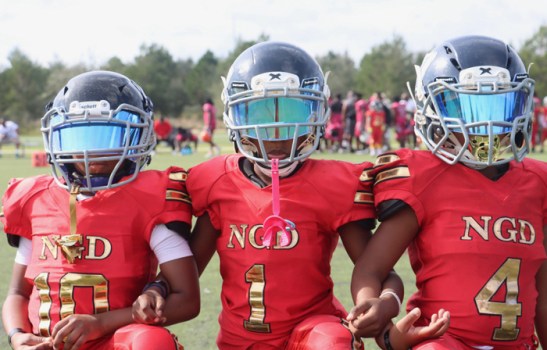 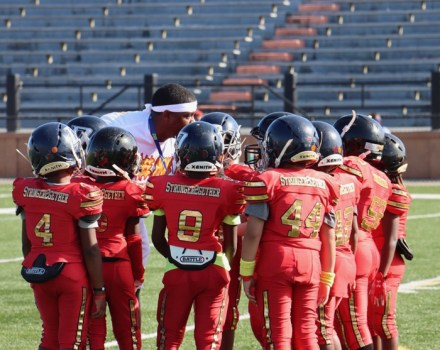 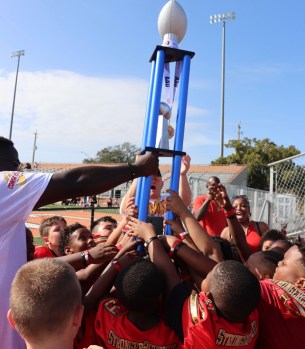 SALISBURY – There are some 7-year-olds walking around Salisbury wearing  national championship rings the size of light bulbs.

That’s a fact that made Christmas a very happy time for youth football coach Craig Johnson.

If Rowan County schools are winning state championships 10 years from now, there may be athletes giving credit to Johnson and his assistant coaches as the guys who got it all started for them.

“I grew up in Washington, D.C., without a lot of opportunities,” Johnson said. “So it’s my passion now to try to make an impact on youth. I’ve found that sports is the best way I can do that. Sports can build long-term friendships, lasting relationships. It’s a very good thing to be able to give a young person something to play for.”

Livingstone College brought Johnson to North Carolina for an education.

He works in Concord with young people who already have made at least one bad decision or one wrong misstep.

These are more enlightened times than the 1960s and 1970s were, and the Stonewall Jackson Youth Development Center is about rehab and therapy and providing direction for juveniles rather than simply punishing them.

Johnson works every day with 15-year-olds  who could have used a Craig Johnson in their lives when they were 7. He won’t be able to save all of them, but he’s determined to save some of them.

“You see it all at Stonewall Jackson,” Johnson said. “All races.  Lots of kids from broken homes. Lots of kids who didn’t have nothing to do.”

The Rowan County youngsters who are lucky enough to know Johnson always have plenty to do. Whether it’s study halls or sports.

After meeting former West Rowan legend K.P. Parks, Johnson began coaching teams that were being organized through the Defenders Sports Academy in Cleveland.

Not long ago, Defenders and the Next Generation Sports Academy, steered by former Salisbury Hornets Romar Morris and John Knox, joined forces. The combined “Next Generation Defenders”  became an important part of the local youth sports landscape.

Johnson’s record is 32-7 with 6U and 7U football teams the last few  years.

What’s the most important trait when it comes to teaching 7-year-olds the complicated game of football.

“Patience,” Johnson said with a laugh.

The Next Generation Defenders team that won the 7U national championship for 2022 is called Free Smoke Elite.

Free smoke, according to the urban dictionary, is a proclamation to all challengers that anyone who wants to receive a beatdown merely has to step up.

“Free Smoke kind of gave us our identity,” Johnson said. “The players, the coaches and the parents embraced it.”

There aren not a lot of 7U football teams within traveling distance, but Free Smoke Elite was allowed to play in a Mooresville 8U league.

They split four games there and got used to playing against larger people.

“Some of the guys we played against in Mooresville were twice our size,” Johnson said. “But we’re grateful they let us play. It really helped us. Our guys got an understanding of the game of football. They learned the proper way to make contact. They learned that the equipment they wear is for their protection, not something to be used to hurt an opponent.”

Johnson explained that Free Smoke Elite won against a tough Virginia team in the Battle of the Borders. That victory led to a bid to travel to Florida to compete for the national championship.

Johnson said he’s fortunate that he gets to focus mostly on what happens on the field. He wears the hat of defensive coordinator as well as head coach.

“I’m fortunate to have my fiancee, Latavia Gray, who is the best possible team mom,” Johnson said. “She does all the paperwork, and there’s a lot of paperwork. Sometimes there’s so much paperwork, she’s not very happy with me. As far as the fundraising for travel, we had the support of the Next Generation Defenders organization.”

Johnson always made sure his team had orange slices at halftime as well as postgame snacks. Those are big morale-boosters.

In Florida, Free Smoke Elite won twice in pool play to advance to the championship game.

The championship contest against the Central Georgia Grizzlies was quite a defensive battle, scoreless through the end of regulation.

Teams alternated possessions from the 10-yard line in overtime to decide it.

Free Smoke Elite had the ball first and scored on it second snap.

“(Offensive coordinator) Reggie Smyre elected to keep the ball on the ground and on second down, Erkyah Horne ran for a touchdown,” Johnson said.

It was quite a run by Horne, who bounced to the outside and broke several tackles on his way to the end zone.

Then Free Smoke Elite got the defensive stop it needed to win the game. When a fourth-down pass sailed incomplete, the local team was the national champion.

“Our defense stood tall the whole game and it carried into the overtime,” Johnson said.

One of the key members of the defense was middle linebacker Caden Johnson, who is Craig’s son.

Two of the Free Smoke linemen — linemen Kingston Dalton and Jaxon Wilson — were honored as All-Americans.

Most of the Next Generation Defenders squads are Black, but the NGD teams do have white and Hispanic players. That’s important to Johnson.

“We’ve got a mixed team,” Johnson said. “We’re open to everyone. When you’re building a team, you need everyone.”

Football seasons are long,  beginning with “spring” workouts in February. The regular season starts in August and if things go well it can run into December.

Johnson soon will be starting the football cycle all over again.

He can’t wait. It’s his passion. It’s his outlet.

The Free Smoke Elite  players spent some down time following their championship in Florida swimming in a pool, and Johnson beamed as he watched the Rowan youngsters splashing around 600 miles from home.

They were getting an opportunity to see a different part of the country. It was the sort of opportunity he didn’t have growing up.

“I hope people can appreciate what this group of young guys accomplished,” Johnson said. “They left Salisbury to compete, they took on some of the best in the nation, and now they’re national champions. They made some history.”