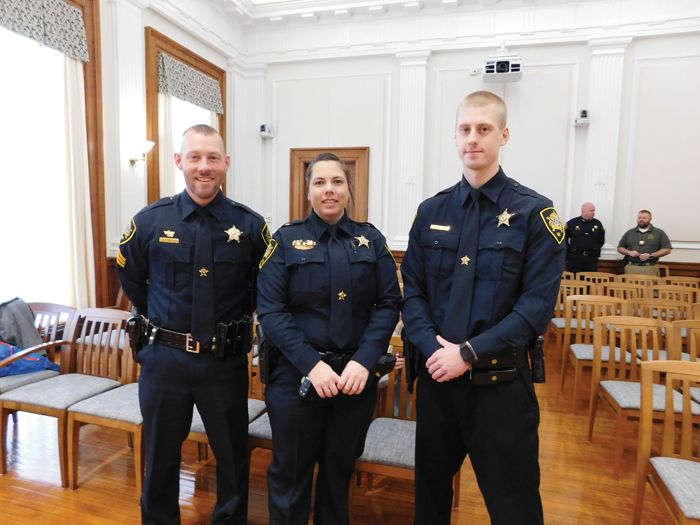 Three deputies from the Rowan County Sheriff's Office received the SAVE award from the state Thursday morning. The three are credited with saving the life of a man they pulled from a burning home, then extinguishing the fire. Recepients are, from left, Sgt. Patrick Schmeltzer, Deputy Hannah Hodges, and Deputy William Johnson. Photo by Elisabeth Strillacci

SALISBURY  — Three Rowan County Sheriff’s deputies were recognized for their heroic actions in November when they pulled a man from a burning mobile home, saving his life.

The North Carolina Insurance Commissioner Mike Causey presented SAVE Awards to Sgt. Patrick Schmeltzer and Deputies Hannah Hodges and William Johnson. SAVE awards are given to individuals or organizations who go above and beyond the call of duty to save lives.

The officers were on a traffic checkpoint, she said, when some car trouble caused them to turn onto Wind Swept Way, where they were approached by two men running across a lawn from a mobile home.

“The deputies saw flames and black smoke coming through the front door of the home,” she said, and the two men told officers another man was still inside the burning structure.

“Sgt. Schmeltzer dove through the front door,” said Horne. The house was being worked on and steps into the home were missing at the time. “Deputy Johnson went in through a side door, and Deputy Hodges went to her cruiser to retrieve fire extinguishers.”

The fire was coming from a pile of trash in a bucket but had already extended up the wall, and Schmeltzer “took in a big gulp of smoke” he said, causing him to step back outside momentarily. He and Johnson continued to call out to the man inside, and when they were able to locate him, tried to rouse him. Unable to do so, the two carried the victim outside while Hodges worked to get the fire extinguished as much as possible.

Firefighters arrived on the scene and doused the rest of the fire.

As Horne noted, the deputies themselves needed treatment, but were “not even aware of that at the time, because they were so focused. They did not have to do what they did. They could have gone back to their cruiser and called it in, and waited for the fire department. But that’s not who they are.”

“If not for the bravery of these three deputies, a Rowan County citizen would not be here today,” she continued.

“You went beyond the call of duty with this,” said the commissioner. “You are the type of people who run toward the active danger, when, as Chief Horne said, you could have just stayed in your car.”

Johnson said he has seen the victim since, and he has expressed his gratitude, and is “doing OK, seems to be fine.”

He and Hodges admitted it felt a little uncomfortable being in the spotlight, but but both acknowledged it is also nice to be recognized.

“I feel like we accomplished something together that night,” said Schmeltzer.