High school basketball: East’s Tee Harris making a name for himself on the court 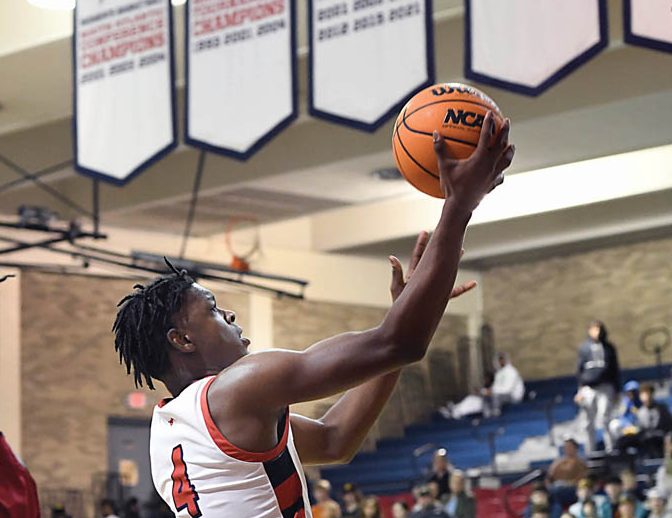 East Rowan’s Tee Harris is averaging 25.2 points and 12 rebounds for the Mustangs. File photo by Wayne Hinshaw, for the Salisbury Post

GRANITE QUARRY — Contrary to circulating chatter, Teyachta “Tee” Harris isn’t some mystery man who emerged from the hills of Virginia.

Sure, East Rowan’s 6-foot-6 post player spent his first 15 years living in a small railroad town called Louisa, a cozy-looking nook planted midway between Richmond and Charlottesville. But he can’t be considered an unknown, not after putting up some flashy numbers for the Mustangs this season.

“He’s a quiet kid who doesn’t say a whole lot,” third-year East coach Andrew Porter acknowledged before a recent practice. “But watch him play. He shows glimpses of dominance. He’s really turning into a take-over guy.”

Has he ever. Through 12 games Harris is averaging 25.2 points and 12 rebounds for 3-9 East. He’s had 10 double-doubles. He’s been a back-to-the-basket terror, a quality thumper on the boards and an accurate long-range marksman. And one more thing —when he sniffs out the opportunity, he jams like he’s mad at the rim.

“I’ve been dunking since right after ninth grade,” said Harris, now a svelte 185 pounds. “I always wanted to but couldn’t for a long time. So I kept trying and trying until I finally got it down pat.”

That’s discouraging news for the rest of the South Piedmont Conference. Harris first dunked in a non-league game at Central Davidson last season and has since added to a candy-colored scrapbook, contributing a pair of stuffs in the just-completed Christmas tournament and an industrial strength, fast-break flush against West Stanly last Wednesday.

“Don’t get me wrong, but he’s a little under the radar,” Porter said. “The COVID year was his sophomore year and he only got in four games in Virginia. He transferred here last year and had a good season — averaged 15 and 10, 15 and 12, something like that. That got his name out there. But the way he’s started this season, it’s just blown up. He transformed into someone who can beat you low and from the edge.”

Credit for that goes to Harris and his mental fortitude. Working all summer with teammates and at least once with that other Harris — the one who wears No. 2 for Salisbury — he’s made himself a diversified player, one who seems as content taking mid-range jump shots and hoisting 3-balls from the corner as he is gobbling rebounds and kissing soft layups off the glass.

“Last year I wasn’t really comfortable shooting 3-pointers,” he divulged. “I shot maybe five all season. Just wasn’t hitting them, so I’d look to pass off. But I worked on my shot over the summer, and it’s gotten much, much better.”

Porter and at least one opposing coach have taken notice. Following an 83-71 loss at Northwest Cabarrus on Dec. 16 — when Harris went off for 31 points, 16 rebounds and five blocked shots — Trojans’ coach Ricky Moore offered a glowing tribute.

“(Moore) told me that was the best game Tee could possibly play,” Porter recalled. “He said there was nothing they could do to stop him. It’s pretty cool when other coaches start saying good things about your players.”

Harris — whose brother Jamantay Cox is an eighth-grade prospect at Erwin Middle School — is clearly a certified problem for opponents. He’s been compared to a scaled-down Kevin Durant, the perennial all-star who averages close to 30 points a night for the NBA’s Brooklyn Nets. “Well, my family thinks so,” he said with a grin. “He’s kind of long, has the ability to shoot, gets the rebound and makes the pass.”

A do-it-all — that’s the formula Harris plans to emulate moving forward. He hopes the Mustangs can break a four-game losing streak and escape last place Tuesday night against Carson, a team he scorched for 23 points and 10 rebounds in last week’s semifinal loss at Goodman Gym. Once the season ends he’ll focus on finding a future home, perhaps among Division II college programs. He’s drawn interest from a handful of small schools and states he’s been accepted at Catawba, though not as a basketball player. Porter, a former guard for Winston-Salem State, is using his CIAA contacts and searching for a proper fit, one that will springboard Harris to more success.

“He projects as a stretch-four in college, not a guard,” Porter said. “Depending on the level, that’s where his ability puts him. I think he could play low-Division I, like a UNCG type school. I think that’s where he fits, but we’ll look at everything.”

He will fit somewhere — and it’s all because Harris has put in the work, learned the SPC’s nuances and enhanced his overall game. He’s a prototype inside-outside player who can bury a nothing-but-nylon 20-footer or dribble-drive for a rim-rattling dunk— all while playing disruptive defense.

“Tee believes he can play with anybody,” Porter said with that boyish enthusiasm he exudes. “Because he can. His potential for the next few years is crazy. If he continues to play with that dog mentality — going after it and playing with hard aggression — he’s got it. We see him doing it this season, going out with a bang.”

And that’s no longer a mystery.