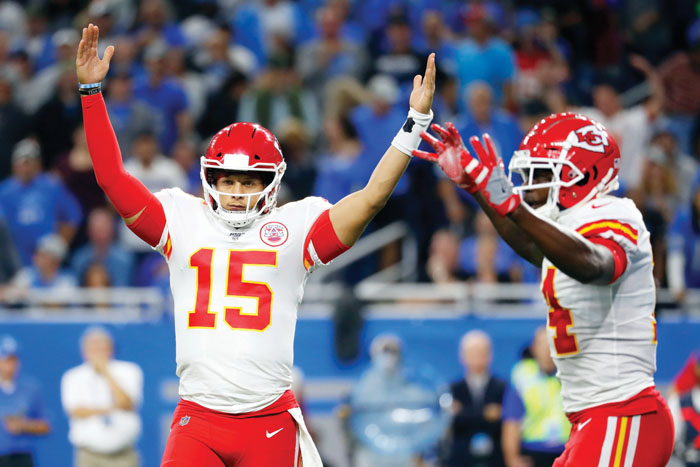 LAS VEGAS (AP) — Patrick Mahomes set the NFL record for total yards in a season, and the Kansas City Chiefs rolled to a 31-13 victory over the Las Vegas Raiders on Saturday to lock up the AFC’s No. 1 seed.

Mahomes passed for 202 yards and rushed for 29 against the Raiders, giving him 5,608 total yards this season. That surpassed the record of 5,562 yards set by Drew Brees in 2011 with the New Orleans Saints.

More than setting the mark, Mahomes helped ensure the top seed for the Chiefs (14-3) and a bye in the first round of the playoffs, which begin next weekend. Kansas City, however, is not assured of home-field advantage throughout the postseason.

The Chiefs matched their franchise record for regular-season victories, set in 2020, and they set a team mark with their 17th consecutive game of at least 300 yards of offense.

The Raiders (6-11) ended their first season under coach Josh McDaniels with three consecutive losses and four defeats in five games. They made the playoffs a year ago, but now face serious questions at quarterback, offensive line and throughout the defense.

Jarrett Stidham started his second game in a row in place of the sidelined Derek Carr, and this performance didn’t go nearly as well as the first one. Stidham completed 22 of 36 passes for 219 yards with a touchdown and interception. He was sacked six times.

A week ago, he threw for 365 yards and three touchdowns in a 37-34 overtime loss to the San Francisco 49ers.

Raiders running back Josh Jacobs, who was dealing with hip and oblique injuries as well as a reported family emergency, was a game-day decision but played. He rushed for 45 yards and could possibly win the NFL rushing title with 1,653 yards.

But Jacobs fell short of the franchise rushing record of 1,759 yards set by Marcus Allen in 1985. This was potentially Jacobs’ final game as a member of the Raiders because his fifth-year option was not picked up. His performance this season has given Las Vegas officials plenty to consider.

Both teams wore black shirts in warmups honoring Hamlin that read “LOVE FOR DAMAR” with his No. 3 in the middle. Mahomes also wore a hoodie that had a drawing of the player with “HAMLIN STRONG” below it. … Chiefs linebacker Nick Bolton made 16 tackles, giving him 180 for the season and breaking the team record of 179 set by Derrick Johnson in 2011. … Kansas City running back Jerick McKinnon has caught a touchdown pass in six consecutive games. He has nine TDs total over that span. … Chiefs rookie defensive end George Karlaftis has 5½ sacks in seven games. … Kansas City tight end Travis Kelce caught six passes for 38 yards, giving him 110 receptions this season, just one off the Chiefs’ mark set by Tyreek Hill last season.

Raiders: Las Vegas has some major decisions to make with its roster now that its season is over.