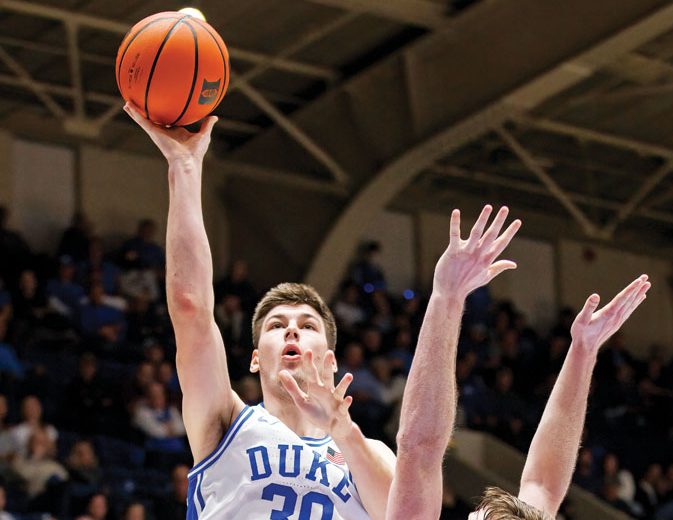 BOSTON — Dariq Whitehead scored 18 points, Kyle Filipowski hit two clutch free throws and No. 16 Duke rebounded from a miserable loss by holding off Boston College for a 65-64 victory on Saturday.

Duke trailed 64-63 before Filipowski sank his free throws with 12.4 seconds left. Ashton-Langford then missed an off-balance jumper in the closing seconds.

Duke was coming off its worst loss as a ranked team facing an unranked ACC opponent, 84-60, on Wednesday night at North Carolina State.

Trailing 63-62, BC’s Jaeden Zackery had a shot blocked by Mitchell at the rim, but Post hit a turnaround jumper with 28 seconds left.

Duke guard Jeremy Roach, the team’s second-leading scorer (11.9 points per game) and tops in assists (3.2), missed the game with a toe injury.

Love and Bacot combined for 25 points in the first half when North Carolina (11-5, 3-2 ACC) built a 13-point lead on its way to its sixth victory in seven games. The Fighting Irish (8-8, 0-5) remained winless in conference play while losing their third straight overall.

Bacot has scored 20 or more points in five straight games, a career first, and has 1,169 career rebounds, one better than Sam Perkins, for second on the Tar Heels’ career list. Tyler Hansbrough is first with 1,219. Bacot’s 58th double-double is two shy of Billy Cunningham’s school record.

Nate Laszewski scored 17 points and Dane Goodwin and JJ Starling 10 each for Notre Dame. Goodwin played in his 143rd game for the Irish, a program record.

Notre Dame trailed by double figures throughout the second half until Cormac Ryan hit a 3-pointer to cut the deficit to seven with 8:25 left. But a minute later Johnson restored the double-digit lead, scoring on a transition dunk during which he was fouled by Ryan and both tumbled to the floor. Ryan, who fell on Johnson, stuck a foot into Johnson’s face and was called for a flagrant 2 foul and ejected. Love and Notre Dame’s Dom Campbell were also given technicals as tempers flared after the play.

The Tar Heels led by as many as 18 in the closing minutes.

North Carolina shot 50% in the first half and, combined with five steals and five blocks, took a 41-28 lead behind Love, who had three 3-pointers and 13 points, and Bacot with 12 points and eight rebounds.

The Tar Heels hit their season average in points scored, best in the ACC, while allowing nearly 10 fewer than their conference-worst average.

Both teams were without key players who left their previous games with injuries. North Carolina played without 6-foot-11 starter Pete Nance, out with a back issue. Notre Dame was missing key reserve Ven-Allen Lubin, who injured his left ankle.

UNC is at Virginia on Tuesday.

LOUISVILLE, Ky. (AP) — Damari Monsanto knocked down a pair of 3-pointers in the final three minutes and Wake Forest held off a late Louisville rally to earn an 80-72 win Saturday.

Louisville trailed by 18 points after Cameron Hildreth’s jumper put the Demon Deacons up 62-44 with 7:22 left, but Jae’Lynn Withers hit two 3s and Mike James knocked down three more as the Cardinals roared back to cut the deficit to just three, 70-67, with 2:40 remaining.

Monsanto hit a wide-open 3 from the corner and Tyree Appleby hit two free throws to push the Wake Forest lead back to eight and after Withers hit two free throws, Monsanto stroked a deep 3 to make it a nine-point lead, 78-69 with 1:26 left.

Louisville trailed by 17 points at intermission. James, who was 1 of 3 from beyond the arc in the first half, hit 4 of 6 in the second half and finished with 24 points to lead the Cardinals (2-14, 0-5). El Ellis had 20 points and eight assists.

Louisville, which celebrated the 40th anniversary of its 1983 Final Four team before tip-off, lost at home to Wake Forest for the first time. The Demon Deacons now are 9-4 all-time in the series and have won back-to-back games.

A 10-2 surge got Virginia Tech within 67-64 with 47 seconds left, but N.C. State scored the next three points from the free-throw line to make it 70-64. Darius Maddox answered with a 3-pointer to get the Hokies back within three, and a pair of Sean Pedulla free throws cut the deficit to 71-69 with seven seconds left. Smith made two free throws to seal it.

Smith and Joiner were a combined 12 of 32 from the field and 16 of 20 from the line, and the pair made three of the Wolfpack’s five from distance. Casey Morsell added 15 points and D.J. Burns Jr. had 10.

Sam Mennenga led the Wildcats (9-7, 2-2) in scoring, finishing with 20 points. Davidson also got 19 points and two steals from Desmond Watson. In addition, Grant Huffman had 16 points.

VCU took the lead with 10:48 left in the first half and did not relinquish it. Shriver led their team in scoring with 12 points in the first half to help put them up 41-29 at the break. VCU pulled away with an 8-0 run in the second half to extend a 17-point lead to 25 points.

The Bulldogs trailed by one point heading to the final minute but made 6 of 7 free throws to win it.

Brice Williams led the 49ers (11-5, 2-3) in scoring, finishing with 16 points and eight rebounds. Charlotte also got 13 points from Lu’Cye Patterson and 11 from Montre’ Gipson.

Smith had seven rebounds for the Highlanders (8-9, 2-2 Big South Conference). Justin Archer added 12 points while shooting 4 of 9 from the field and 4 for 5 from the line, and they also had eight rebounds. Josiah Jeffers was 4 of 6 shooting, including 2 for 3 from distance, and went 2 for 3 from the line to finish with 12 points.

GREENSBORO (AP) — Maleeck Harden-Hayes’ 25 points off of the bench helped lead UNC Wilmington to a 66-61 victory against N.C. A&T.

Harden-Hayes had six rebounds for the Seahawks (14-3, 4-0 Colonial Athletic Association). Shykeim Phillips scored 14 points while shooting 4 of 5 from the field and 5 for 5 from the line. Amari Kelly shot 5 of 8 from the field to finish with 10 points. The Seahawks picked up their 13th straight victory.

Phillips scored 10 points in the first half for UNC Wilmington, who led 30-27 at halftime. Harden-Hayes’ 17-point second half helped UNC Wilmington finish off the five-point victory.

BALTIMORE (AP) — Isaiah Burke had 28 points in Morgan State’s 78-73 overtime win over N.C. Central in a Mid-Eastern Athletic Conference. Burke also had five rebounds for the Bears (7-8). Kris Monroe finished with 19 points for the Eagles (7-8).

Jones sank 9 of 13 shots from the floor, including 4 of 6 from 3-point range, for the Catamounts (10-7, 3-1 Southern Conference). Tyzhaun Claude pitched in with 16 points and nine rebounds. Vonterius Woolbright scored nine with six assists.

The Catamounts outscored Mercer 42-22 in the second half.