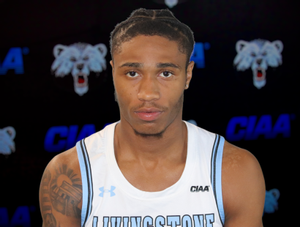 ELIZABETH CITY — The first game for the Livingstone men’s basketball team since Dec. 19 was a success.

The Blue Bears played for the first time since young forward Eric Henderson was killed in an accident while returning to Livingstone from the holiday break.

Elizabeth City State (4-9, 0-4) has struggled this season, but the Vikings shot the ball unusually well at the Vaughan Center on Thursday, so it was a solid CIAA road win for the Blue Bears (7-6, 3-1).

Livingstone trailed by as many as nine points in the early going and led 36-34 at the half.

The pace and the shooting percentages picked up in the second half.

Livingstone shot 70 percent from the field in the second half and needed all of that accuracy.

In addition to shooting well, Livingstone made only eight turnovers.

It was a two-point game with five minutes left when Khyree Temple made a 3-pointer and a layup for the Blue Bears to extend the lead.

With two minutes left and the Blue Bears leading by three, Temple dished to De’Marr McCrae for a crucial bucket.

Livingstone shot 51.7 percent for the game and got points from 10 different players. The Blue Bears got a whopping 55 points off the bench, but that’s a little misleading, as Temple and Lassiter didn’t start but played heavy minutes.

Livingstone won’t play again until it goes to Shaw on Wednesday.