Sports obituary: Shatterly made impact through years at North, West 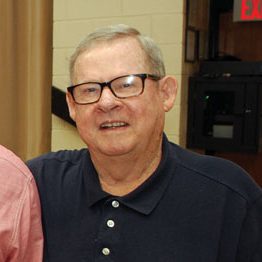 He worked as hard on his last day as he did on his first, which tells you a lot about Shatterly. As West Rowan’s athletic director, he spent all day — and night — preparing Falcon Stadium for graduation, getting all the details just right.

A man who combined old-fashioned work ethic with intelligence and kindness, Shatterly died on Monday. He was 83.

He invested 33 years in the school system, all of it in Rowan County — the first 22 at North Rowan,  the last 11 at West Rowan.

A teacher, coach and AD touches a lot of students and athletes over the course of 33 years. Shatterly was a year-round role model.

He’d assist with football in the fall, backs or receivers, then coach wrestling in the  winter, and then track and field in the spring.

In his days at North, he taught history with enthusiasm and inspired decent students to become great ones. He taught driver’s education with unlimited grace and patience.

Shatterly was brought up in Yanceyville, a small town of similar size to Mount Ulla. It’s rural, not far from the Virginia line.

He graduated from Bartlett Yancey High in 1957 and from Appalachian State in 1963.

His first full-time job was at North Rowan, when the school’s sports were still in the hands of icons such as Walt Baker and Burt Barger.

When Barger headed for Davie County after the 1965-66 school year, he handed off a successful track and field program to Shatterly.

Shatterly got the wrestling program at North started in between football practices. He used to tell the story of practicing wrestling on the Bermuda grass behind the goal posts on the football field before the first wrestling mats arrived. He told the story of losing to A.L. Brown 53-0 in North’s first home match.

Those were humble beginnings, but by the late 1960s, Shatterly had built North into a wrestling powerhouse. The Cavaliers were Western North Carolina High School Activities Association champions in 1968 and 1969. The 1968 Cavaliers went undefeated, and on Jan. 4, 1968, one of the red-letter dates in Rowan County wrestling history, it was North that stopped Boyden’s legendary, four-year, 66-match winning streak.

One of Shatterly’s finest wrestlers on those championship teams of the late 1960s was 185-pounder Buddy Lowery, who would become the architect of one of the state’s top wrestling programs as the head coach at Davie County.

A year to remember

The calendar year of 1968 was a memorable one for Shatterly.

North students dedicated their annual to him.

He got married that summer to Jane Sharon Frazier. They were wed on July 31, shortly before football two-a-day practices started.

The Shatterlys had four children, two girls and two boys — Julie and Jill, then Jake and John.

Shatterly would have been happy to spend 30 years at North, but by the 1980s, his own sons were wrestling, and he made the move over to West to coach them in 1985. He was known for putting in as much energy and time with the average wrestlers as the talented ones. He would build the Falcons into one of the area’s top programs.

Shatterly missed North, but he never regretted his move to West. He said coaching his sons was the biggest thrill he ever had in athletics.

“Ralph is very organized and he’s thorough, and he’s been around sports all his life and knows what it takes to achieve success,” Kluttz said at the time.

Shatterly had served as interim AD at North, filling voids between AD hires, so he had some experience. He knew what he was getting into, but he accepted.

Besides his teaching and coaching duties, he took on the additional AD responsibilities of schedule-making, official-arranging and field maintenance.

“I was at school a lot as it was, but now it looks like I’ll be there all the time,” Shatterly said in a Post interview in 1990. “But other than home, I can’t think of any place I’d rather be.”

In the fall of 1994, West won a football playoff game against Starmount.

That meant an all-night end zone painting session for Shatterly before the Falcons’ second-round game with North Rowan. He’d promised the West players he’d put a special paint job on the end zones if they won their first-round playoff game, and he lived up to his promise.

He finished painting around 3 a.m. with November temperatures in the 40s. The West end zones looked like college end zones when he was finished. He called his wife and said he wouldn’t be able to make it home. He slept four hours at the school and was able to put on a smile for his first period class.

That’s who he was and that’s how people will remember him.

Shatterly was an unassuming guy who never looked for the spotlight, but accolades piled up for him after retirement.

Wrestling was his favorite sport to coach, and he coached it hard and well for 32 high school seasons. He could say he coached championship teams in four different decades — the 1960s, ’70s, ’80s and ’90s.

His wrestling coaching record was impressive, more than 200 victories at North Rowan and more than 100 at West Rowan. He coached individual state champions, including West’s Steven Oliphant, who won back-to-back titles at 171 pounds in 1990 and 1991.

“I spent more time with my fellow coaches than I did with my family,” a beaming Shatterly remarked when he was inducted. “I was fortunate to have a great wife. She kept the kids out of jail.”

Shatterly was inducted into the North Carolina Athletic Directors Association Hall of Fame in 2014.

He served for many years on the Salisbury-Rowan Sports Hall of Fame committee.

His legacy includes the Ralph Shatterly Award. It is voted on by Rowan wrestling coaches annually and is presented to the county’s coach of the year.

“There were times Ralph slept on a wrestling mat at the school, trying to get done all the things that he needed to do,” former North Rowan head football coach and teacher Larry Thomason said at Shatterly’s Hall of Fame induction. “But everything Ralph did, he did with precision.”