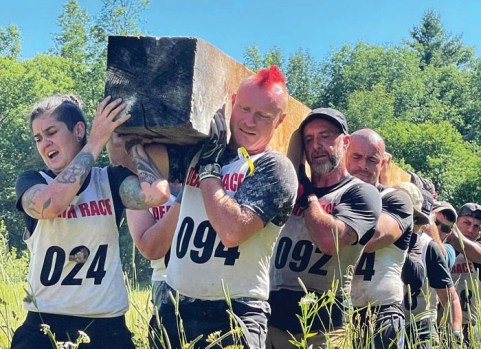 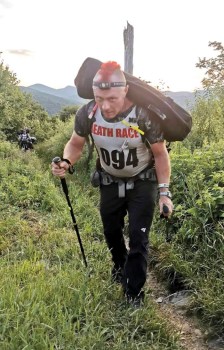 Andrew Head hiking a trail carrying his rucksack. Head has been preparing for his winter Death Race by rucking with a 50-pound backpack and a 70-pound sandbag. Submitted photo 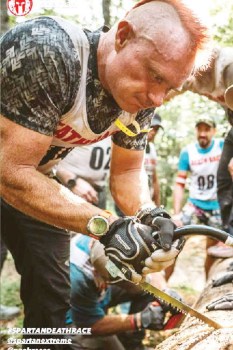 Andrew Head sawing wood during the Death Race. In his last race, Head had to saw wood for up to 12 hours. Submitted photo 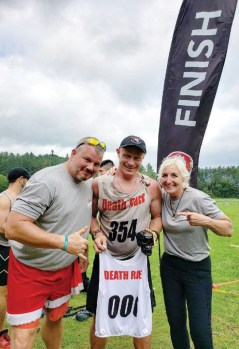 Andrew Head, center, after the completion of the Death Race. Head has yet to finish a Death Race. Submitted photo 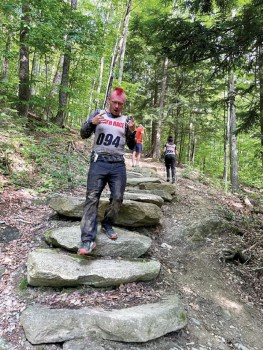 A worn out Andrew Head making his way back down a hike. Submitted photo

SALISBURY — Do you think you could carry — all at once — 50 pounds worth of camping gear, a 70-pound sand bag and two 10-pound ice blocks in a bucket up and down a one-mile hill for an hour and a half?

Do you think you could lie down on your side and roll sideways doing an exercise called pencil rolls for miles, over several hours, in a field that is filled with fish guts?

What about sawing logs with a handsaw for up to 12 hours?

Andrew Head has done all of this. The 42-year-old is a Salisbury native living in Granite Quarry with his wife and two children. He graduated from the University of North Carolina-Chapel Hill in 2003 and was the school’s mascot, Rameses. He now works as a locomotive engineer for Norfolk Southern.

Head travels to Pittsfield, Vermont, and competes in these brutal challenges known as the Spartan Death Race. The 5-11 185-pound endurance athlete is gearing up for his first winter race after participating in summer versions the past two years. During his first race in 2021, Head lost four of his toenails and didn’t finish. Only five people finished. The judges pulled him from his second race last summer for safety reasons. He had spent hours doing challenges while being sprayed with water and the judges feared he had developed hypothermia. Only three racers finished that race.

“It’s an extreme endurance event, set up and designed to push you beyond what you think you can do,” Head said.

Those who finish a death race don’t make any money, but only earn a white skull. Head has yet to receive a white skull. He has received a black skull after winning the Mount Sparta Challenge, which is a 24-hour event where he had to go up and down a one-mile version called Joe’s Mountain. He climbed 37 miles and almost 17,000 feet of elevation — half the distance to the top of Mount Everest.

The winter race takes place on Feb. 9-11. Head intended to do only the summer races, but his fellow racers convinced him to try the winter version.

The challenge he is most nervous about is the cold plunges. He will have to use an ax to cut a hole in the frozen Beaver Pond and submerge himself in freezing water for five minutes and remain fully underwater for 15 seconds. Head called cold water his “nemesis,” but he has trained for the challenge by doing cold plunges in his backyard swimming pool. Because he got pulled from his last race for suspected hypothermia, he will wear proper winter gear, such as Merino wool and Gor-Tex outer layers to stay dry.

What is a death race?

One of the toughest team challenges Head said involved a porta-potty. He and eight others carried the porta-potty with someone inside it up Bloodroot, a nine-mile steep trail. Head describes the trail as if “it’s got to go to heaven.” The person inside the porta-potty recited a poem to the other team members, which they all had to memorize and recite back to the judges once they got to the top.

The mental feats of concentration and memory while under physical stress sets the Spartan Death Race apart from other extreme contests. Keep in mind that the racers don’t sleep, barely eat and are worn out from the physical challenges they have already completed. In another mental challenge, the racers walked across an area that was several football fields long and learned 30 facts about elephants. Then, they walked back across the same field and recited 20 of the elephant facts to the judges.

Head said at some points the race can be a blur.

No death races are the same. In fact, the racers don’t even know when the race starts. They show up the day before it is scheduled and wait around for the judges to tell them when to start, usually very early in the morning. The races take place at Riverside Farm, which is owned by founder Joe De Sena, a former ultramarathon runner who started the Spartan Death Race in 2007. In the forward of the book, “The Legend of the Death Race,” written by Tony Matesi, De Sena describes it this way: “The goal was simple — crush people. Absolutely crush them. Push them so hard beyond their limits that they finally meet their real selves.”

‘I just wanted to see what I can really do’

Head trains for these races by going to a high-intensity interval training (HIIT) class every morning at 5:45 a.m. Then runs a 5K later in the day. The interval training consists of strength and cardio exercises. To prepare for the winter race, Head has been rucking 5Ks (walking or hiking with a weighted backpack or rucksack) while carrying a 60-pound backpack and a 70-pound sandbag.

He broke his arm while roller blading with his kids in 2018 and lost 50 pounds. When he finally recovered, he decided that he needed to make a change. He started working out more and heard about Spartan Races in 2019. Spartan Races are obstacle races that vary from 3-miles to marathon distances.

In 2020, he started doing endurance events called Hurricane Heats. These races are mainly team based endurance events. Racers do a lot of burpees, push-ups, sit-ups and almost always have to build something. There is a four-hour heat, a 12-hour heat and a 24-hour heat. Head slowly progressed and has successfully finished each heat. He then traveled to Georgia to compete in a 40-hour endurance event called The Gauntlet. After finishing that race, Head said there was nothing else to do but try out the Death Race.

Competing in these events, Head has made numerous friendships. Only around 130 racers entered the summer Death Race in 2022 and Head describes his fellow racers as “very family like.” The shared suffering they all go through brings them together, Head said.

“You form bonds with those people that are probably comparable to something like in the military when you have been in battle with people,” Head said. “It’s hard to describe the bond you get with those people.”

Erin Powell, a fellow Death Race competitor, was the one who convinced Head to compete in the winter race. While it is an individual race, the two encourage each other to keep going and not give up. Whenever they compete, they make a weekend out of it. Both drive their campers to Vermont and go camping.

“Our mindsets are the same, we get along together and we work well together,” Powell said. “It’s like a brotherhood.”

To most people, entering a race with the word “death” in it seems insane. But Head thinks otherwise.

“Most people have no idea what they are really capable of. Everybody walks around in their little comfort zone and their nice warm house and they really, honestly, have no clue what they can do because they’ve never been pushed to that point,” Head said. “And I just wanted to see what I can really do.”