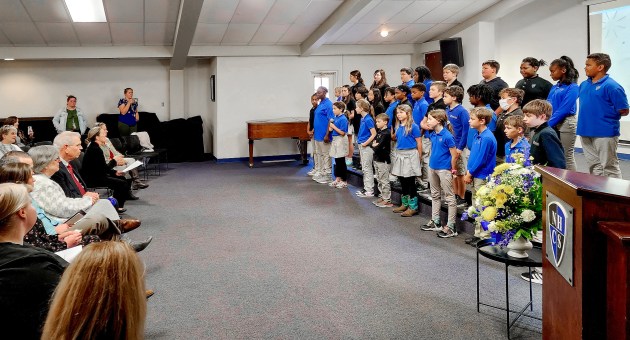 Members of the Victors program at North Hills Christian School perform a piece for Doris Plummer during a recent celebration of Plummer's tenure at the school. - Submitted 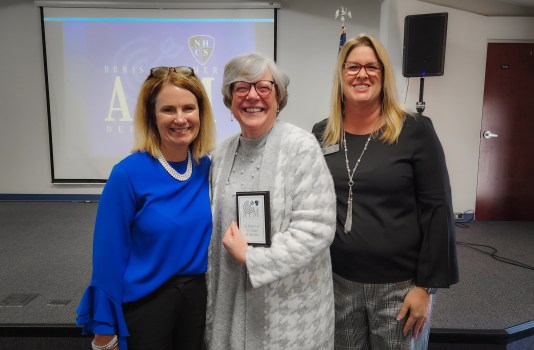 SALISBURY — North Hills Christian School recently celebrated one educator whose service has spanned most of the school’s 55-year existence.

The school hosted family, friends, and former students to recognize Doris Plummer’s 45 years as an educator at North Hills. The event culminated in the unveiling of the newly renamed Doris Plummer A.I.M. Department (Academic Individualization and Modification).

Plummer created the A.I.M. department at North Hills more than a decade ago with a vision to focus on the needs of the individual student.

From humble beginnings of two part-time instructors and approximately 30 students, the program has grown to include a director, an assistant director, and 12 staff members serving nearly 100 students on campus. And that department is not Plummer’s only legacy. She was also responsible for creating the Victors program three years ago for students with deeper learning or behavioral challenges.

“(Plummer’s) priority has always been to see every student reach his or her God-given potential,” said Maria Lowder, the North Hills executive director.

As a soon-to-be college graduate in 1978 from Millersville University, Plummer was waiting tables at a local restaurant in Lancaster County, Pennsylvania. During one of those shifts, a restaurant patron, Robert Smith, started a conversation with Plummer. He told her he was from Salisbury and was on a small Christian school board searching for an elementary teacher. Plummer packed her bags, and the rest is history.

Plummer has held many roles during her career. As a classroom teacher, she taught numerous grades and subjects, including music, drama, algebra, geometry, consumer math, statistics, apologetics and Bible. She also held administrative roles as assistant principal and, most recently, the A.I.M. director.

School officials have noted that Plummer is usually the first to arrive on campus and often the last to leave. Her dedication to the students at North Hills is said to have been her most excellent motivator.

“When I’m getting ready to see Jesus, I will wish I had more time to help a student,” Plummer said.

Plummer’s impact spans generations of students and their families, and she is grateful to have been able to see the fruits of her labor in her many students’ lives.

Lowder added, “North Hills is eternally grateful for how she lives out the school’s mission. It was a mission she helped to craft – ‘Equipping the Hearts and Minds of Students to Impact the World for Christ.'”

Although Plummer is stepping away from her role as the director of A.I.M. at the end of the year, she will continue to support North Hills and the A.I.M. department part time.