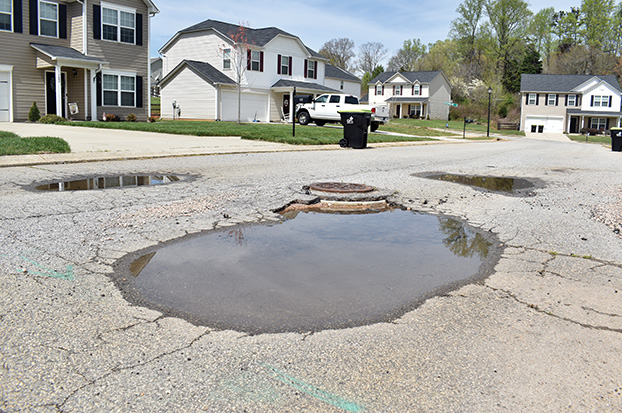 The streets in Miller's Grove are marked by potholes filled with standing water in several places. Ben Stansell/Salisbury Post

CHINA GROVE — China Grove recently settled a lawsuit with the developers of the Miller’s Grove subdivision over unfinished roadwork in the neighborhood.

During a regularly-scheduled China Grove Town Council meeting on Tuesday, city officials voted to accept the settlement so that the town could move forward in finishing the project left undone by the developer.

“The lawsuit (which was filed in May) is dismissed, but we need the settlement officially approved,” said Tom Brooke, the China Grove town attorney.

Brooke explained that the situation emerged with unfinished infrastructure and premature promises.

“When (Miller’s Grove) was developed, they started selling lots before they finished the roadway,” Brooke said. “What we did was establish an escrow account with them. (The account) ended up with around $197,000. We kept trying to get them to finish it, but we could never get them to finish it.”

In September, the town issued a notice of violation to China Grove 152, imposing forfeiture of the balance held in escrow by the town pending the completion of the streets.

“You drive out there, and the manhole covers are a half inch to an inch in height,” Bringle said. “It is because (the developers) never came back and put the second coat on that they were supposed to.”

The town attorney explained that the money in the escrow account was insufficient to cover the likely expenses of completing the unfinished roadwork, hence the need for the lawsuit.

“Unfortunately, $197,000 is just not enough to do the job,” Brooke said. “We went out and had a study done. We got new estimates based on current pricing.”

When the legal teams from both parties had a mediation session about a week before Christmas, they settled on the amount needed to finish the project.

With that, Brooks pointed out that fixing the roadways in Miller’s Grove will not require any taxpayer dollars.