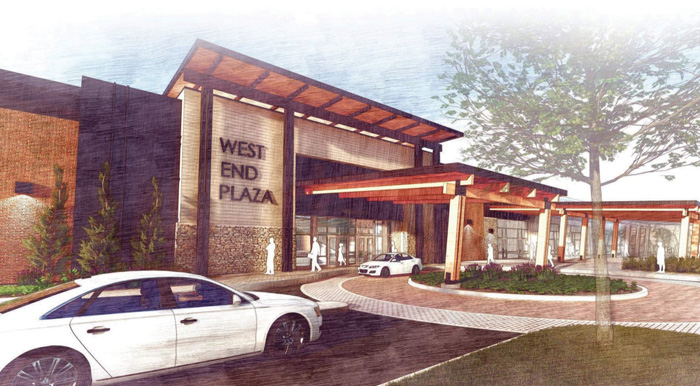 An exterior look at one of the proposed entrances to West End Plaza.

SALISBURY — The Rowan County Board of Commissioners voted 3-1 during Tuesday’s meeting to approve the filing of an application for approval for financing of $30 million that would fund renovating West End Plaza into meeting space and offices.

The commissioners have to file the application for approval with the North Carolina Local Government Commission. Tuesday’s public hearing was part of the process to get that  installment financing contract approval.

As of last Friday, Dec. 30, only three banks were listed as in the running to supply bids for the installment financing contract. If the commissioners do not like the bids because of high interest rates, they can deny the bids. The commissioners will hear the bids on Thursday at 2 p.m. at the Rowan County Government building.

Commissioners Greg Edds, Jim Greene and Mike Caskey all voted yes after the public hearing was closed. Commissioner Craig Pierce was the lone vote against. Commissioner Judy Klusman was not at  Tuesday’s meeting.

Pierce explained he voted no because they do not know what the bids for the financing contract are yet, which would include the interest rates on money the county would have to pay back to the banks. He preferred voting on the contract after the commissioners know what the bids are.

“I don’t like voting to put forth a public hearing on monies that we haven’t established. After Thursday when the bids come in, it will be a lot easier to assess if this is even a project that can fall in with those parameters,” Pierce said. “We’re guestimating $30.1 million. If the bids are going to be in on Thursday, let’s wait til we get the bids and then open it up for a public hearing.”

The commissioners purchased the West End Plaza, which was formerly the Salisbury Mall, for $3.4 million in 2013. Also during Tuesday’s meeting, the commissioners approved a motion to authorize county staff to make the final payment of $997,425 for that.

Edds was confident that voting yes toward the financing contract was the right idea. The county has been working toward these renovations by saving funds since the initial purchase in 2013, Edds said. He also did the math. The building is 335,000 square feet and was bought for $3.4 million. That comes to a total of $10.14 per square foot, he said, which Edds considered worth it.

“You see the work that has been done over the past 10 years financially and the county is in terrific shape financially. We’ve saved $6 million cash, which is 20% of the budget for this project, so we can use that cash right now,” Edds said. “This will certainly breathe life into that side of town and I think it’s exciting.”