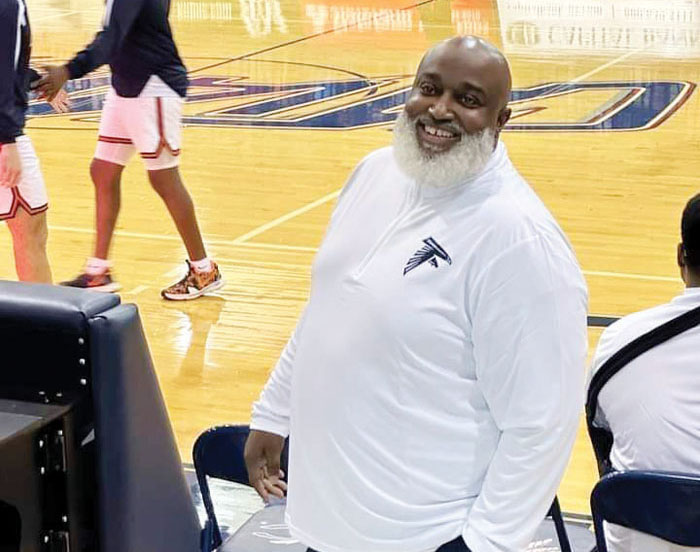 SALISBURY — From 0-5 to tournament champions.

Cuthbertson was the guy that Mike Gurley, who coached six Sam Moir Christmas Classic tournament winners, wanted to succeed him. Now Cuthbertson is 1-for-1, undefeated in the Christmas tournament.

Cuthbertson is the 10th head coach in program history. He is the first Black coach to lead a program that has turned out incredible players and accounted for a sizable chunk of Rowan County’s fabulous history in boys basketball.

West no doubt would’ve been ready to hire a Black boys basketball coach a long time ago, but it’s not like there have been any job openings or interviews. Not with Gurley prowling the sideline for a generation, 25 seasons and a county-record 450 wins.

But now it’s Cuthbertson’s show, and so far, so good.

“I’m Cleveland born and Cleveland raised, played for the Falcons, and it does mean a lot to me to be the first Black head coach of this program,” Cuthbertson said. “There are a whole lot of Cleveland Cuthbertsons. I’m representing my family, my town, my community, my school. How this West team does matters. This is important.”

While Cuthbertson is a rookie high school head coach, he is not a typical first-year head man. He is 40-something, white-bearded and well-seasoned. Off the court, he’s a barber.

Most of the county’s top high school players, regardless of school, learned from Cuthbertson at some point in their development. His Team F.L.Y. (For Love of Youth) AAU squads were highly successful.

“Sixth grade, I joined Team F.L.Y., and that’s where I first met Coach Cuthbertson,” Givens said. “So we’ve had five years together and we know a lot about each other. I know his coaching style and he knows my playing style. He’s got a way with words and I think that’s what makes him such a good coach. He gets through to the collective team as well as to the individuals. He has high expectations and he pushes us like crazy to go above and beyond what we ever thought we could do.”

West had two talented young 6-foot-8 players last year in Bryson Cowan and Levon Jacobs. Both transferred to Moravian Prep prior to this season.

So Cuthbertson’s first West squad lacks height and depth. The Falcons have to fight hard to overcome those shortcomings.

That 0-5 start seems like a long time ago after all the smiling that was done at Catawba’s Goodman Gym on Friday.

But 0-5 is where the Falcons stood after a 63-62 loss to Northwest Cabarrus on Dec. 6. “No matter what life throws at you, keep smiling,” is Cuthbertson’s motto. That slogan was put to the test.

“I thought we might start slow,” Cuthbertson said. “Some guys coming off the football field, then three days of tryouts and two practices, and we’re out there playing North Iredell — a very good team.”

West lost that opener in the final seconds. Then West lost a competitive game to 4A Mooresville and a three-point game to 4A Davie. West played Davie without Gill, who averages 19 per game.

Next came another loss to North Iredell and the painful setback to Northwest Cabarrus.

“We lost to good teams and had a chance in four of those first five,” Cuthbertson said. “I keep an eye on Mooresville and Davie, and they won their Christmas tournaments. They’re good. So even at 0-5, there wasn’t any panic. I still believed we’d have a good team and our guys believed it. They kept working, just tried to get a little better every day.”

West finally broke through for Cuthbertson’s first victory by pounding North Rowan. A two-point win against Carson was huge for confidence, and the Falcons blew out South Rowan. Then they handled North Rowan and Carson in the Moir tournament, getting out of the gate very quickly in both contests.

“Even when we started 0-5, we knew we were better than that and we expected a change,” Givens said. “We got after it more at practice and started to buy in to what Coach was telling us. We came together as a team and communicated to each other that we were better than our record and needed to play like it. We got dialed in mentally, started realizing what it took to win, and we’ve had some growth as a team.”

The Falcons responded well to the Christmas tournament atmosphere. They got the job done, and then some.

“Last year we had an opportunity to win the tournament, but circumstances happened (a shooting in the lobby at halftime during West’s semifinal game) and we weren’t able to,” Givens said. “So we really wanted it this year, wanted it not only for each other, but for Coach. This was his first time as a head coach and this tournament means a lot to him. He was the tournament MVP 30 years ago.”

Now Cuthbertson is part of small group that has won the MVP award as a player and also coached a Moir championship team. That crew includes Andrew Mitchell, Mike White, Toni Cress Wheeler and the late Angie Browder Slabach.

Gill and Givens combine for nearly 40 points per game and provide a lethal 1-2 punch for Cuthbertson’s squad. When they get scoring help, as they did in the championship game from Norman and Holmes, the Falcons can be tough to beat.

Givens, a junior who shoots the lights out while maintaining a 4.25 GPA, has been in double figures every game and had 32 against Davie.

Norman has scored in double figures in his last four games.

Holmes has been hurt and has been limited in practice, but he is getting healthy and made an impact in the tournament.

Brant Graham and Romir Hairston are talented young players. They’ll have their ups and downs, but they’ll be critical to West’s success.

Cuthbertson believes in all of the Falcons, the cool ones and the fiery ones. They’ve got some of both.

“As a coach you’ve got a purpose and you hope you can make a difference in the lives of a lot of young men,” Cuthbertson said. “The easiest thing in the world is to give up on a kid when he makes a mistake, but that’s not who I am. Sometimes you have to sit them down and sometimes they have to learn  a lesson, but then you move on from it and start fresh.”

It’s still easy to be skeptical of the Falcons. After all, all five of their wins are against Rowan County opponents. So they’ve still got some proving to do. Friday’s home game with Lake Norman Charter will be an important measuring stick because the Falcons can finish almost anywhere in the South Piedmont Conference — except first or last. Their future is a mystery. It’s wide open.

Riding a five-game winning streak and able to call themselves Moir champs for the first time since 2016, the Falcons are ready to embrace the next challenge.

“We’ve established our identity and we know who we really are now,” Givens said. ‘We know we’re not that team that started 0-5. We want to continue to play at a high level and we want to be the team we’re capable of being.”

A relaxed Gurley relished the Falcons’ Christmas triumph. He was excited for them.

“Proud of Dadrian, but not surprised,” Gurley said. “Dadrian is a Falcon.”