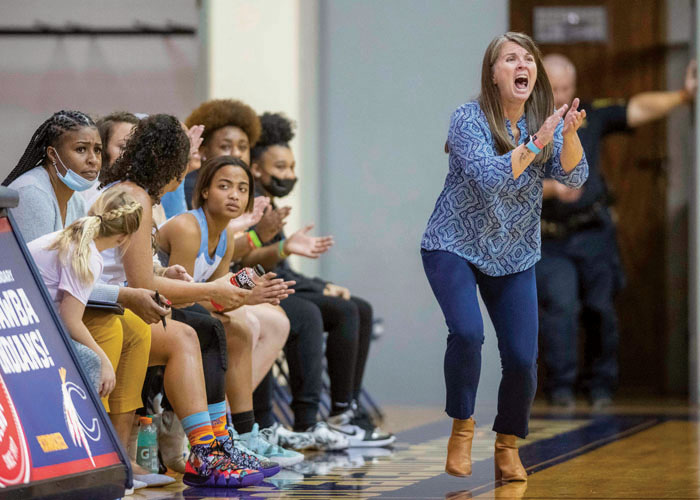 West Rowan head coach Ashley Poole coaches her team against East Rowan in the opening round of the 2021 Sam Moir Christmas Classic . JON C LAKEY / FOR THE SALISBURY POST

SALISBURY — It got a little wet Friday night at Goodman Gym.

It was there — just outside West Rowan’s locker room, two staircases and a steel door removed from the clamor above — that the triumphant Falcons surprised coach Ashley Poole with a water-bottle spray-down following their lopsided win in the Sam Moir/Dale’s Sporting Goods Christmas Classic championship game.

“First they said they were gonna put me in the pool tonight,” Poole said with that inviting smile of hers. “Thank goodness that door was locked. I just walked in the room and the girls were all waiting for me. I knew something was up and had to run out of there.”

An instant later Poole was racing down the hallway, trying to avoid a water-infused assault. It was, perhaps, the first time all season she unwillingly surrendered.

“Hey Coach,” junior guard Makaylah Tenor bellowed from a safe distance. “We’re just trying to get you prepared for the states.”

Right there you have a snapshot of how wonderful things are in Falconland.  So far they’ve managed to soar above all competition while keeping their feet — and their minds — firmly planted on the ground. Through 10 games, including an ornamenting 72-30 rout of North Rowan, slowing West for 32 minutes is a test no one has passed.

“They’re just a great team,” said Poole, now a 10th-year coach. “They play together. They’re unselfish. And when you’ve got talent as deep as ours, it’s important that we’re unselfish. I think we’ve had a different leading scorer just about every night.”

For the record, Poole has used 10 different starting lineups for a 10-0 team that is tied for first in the South Piedmont Conference and is ranked first in 3A West by MaxPreps and second in the RPI rankings. Whatever she’s doing seems to be working. “We have a rotating starting five,” she made it known. “All of our players deserve to start. They’re that good.”

It’s not just the unblemished record that makes West an intriguing post-season contender. The Falcons have watched rivals Carson (2021) and Salisbury (2022) earn recent state titles, so they’ve got that for inspiration. Now consider that not one opponent has come within 24 points of knocking them off their perch. Two of them — Carson twice and South Rowan once — have been subdued by at least 60 in the past three weeks. The Falcons average 73 points per game and allow fewer than 29. Stats like that can’t be ignored.

“We knew this season was special from the jump,” tournament MVP Lauren Arnold noted. “We have energy all the time. We have a family-oriented culture here. We like each other. That’s all on Coach Poole. She keeps us steady, keeps us level. She’s truly a second mom.”

Arnold, a 5-foot-10 junior with a feathery mid-range shot, leads West with a 14.6 scoring average after netting 35 points in two tournament victories. Now she’s inched within 178 points of 1,000. “Real steady player,” Poole acknowledged.  “She’s big on the boards and knows how to finish. And she really works our defense.”

So does Jamecia Huntley, a 5-10 senior who dined on state championship fare with Salisbury last March. As a transfer she delivers fierce, in-your-face defense along with solid rebounding and an element of grit the team hasn’t seen since Abigail Wilson steered the Falcons to a 2019 Christmas title.

“If we’re going to win in the playoffs, this is the team to do it with,” Huntley said after tallying nine points and snagging nine rebounds against second-seeded North (8-3). “These girls are my teammates, not just friends I play ball with. There’s a difference. A teammate is there for you all the time.”

One who has proven invaluable is freshman Tiara Thompson, a revelation in the Falcons’ backcourt who has quarterbacked the offense with aplomb. She averages better than 12 points a night after contributing 10 points and six rebounds in the tournament final. Poole, who coached West to a middle school county championship in the fall, is all too familiar with the ready-to-ignite sparkplug.

“I’ve had the pleasure and the honor of coaching these girls for quite a few years,” the coach said after West posted its seventh December win. “We’ve been building for this. We tell them to trust the process all the time. When you do that, you have a chance to be successful.”

The rest of the roster includes a number of leading ladies dressed in character actor’s clothes — and a true bouquet of personalities. There’s junior De’Mya Phifer, a backcourt wizard with a double-digit scoring average; six-foot forward Emma Clarke, a rugged junior who plays beyond her years; and Dede Cuthbertson, a well-schooled senior role player who started at guard in the championship match. “It’s been amazing,” Arnold said without being asked.

It appears West has the goods to make a deep post-season run. Already 3-0 in SPC games, the Falcons have a bona fide shot at an unbeaten regular season. They’ll return to action Friday night against visiting Lake Norman Charter.

“This team is well above getting to the state championship,” said Huntley, someone who should know these things. “We just can’t let all the outside chatter and high expectations get the best of us. And we can’t become complacent. That won’t work.”

Poole, of course, knows what will. She understands everything that glitters in December isn’t necessarily gold in March. And that high expectation, though sometimes poisonous, is a prerequisite to high achievement.

“We grew up a lot last year,” she said, referencing West’s 17-7 campaign that ended in Round 2 of the states. “We took some lumps, too. But I knew we had Tiara coming and then Jamecia came over to go with all the talent we already had. It’s all right there for us if we keep playing West Rowan basketball.”

And that, of course, could mean another splash of water.