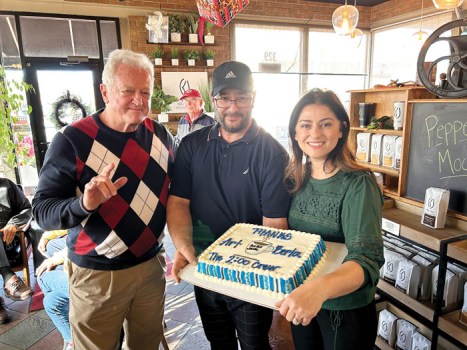 Terry Osborne poses for a picture with the owners of Koco Java, Arturo and Berta Therecka, and a cake the "2 O'Clock Crew" had made in their honor. 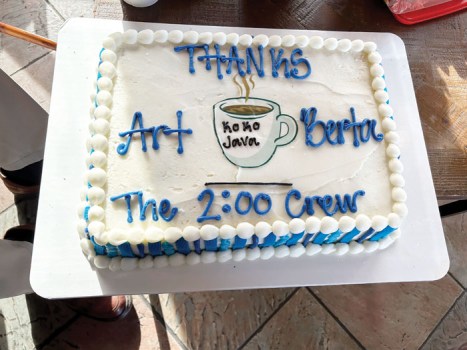 A decorated cake baked for the owners of Koco Java, Arturo and Berta Therecka, by the "2 O'Clock Crew." Elaine Spalding / Submitted 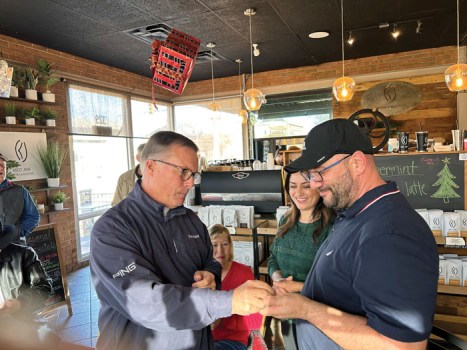 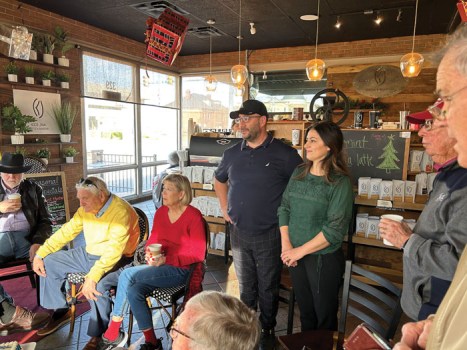 Arturo and Berta Therecka are thanked by attendees for creating a community hub for Rowan County residents. Submitted/Elaine Spalding. 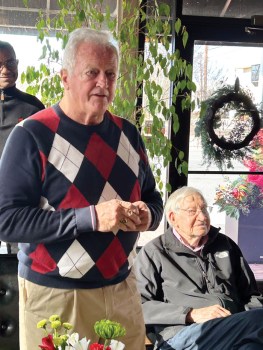 Terry Osborne gives a speech about how much Koco Java means to the "2 O'Clock Crew" and the community. Submitted/Elaine Spalding.

SALISBURY — People come for the coffee, but stay for the community.

Koco Java has been a Salisbury staple for years, serving fresh coffee, espresso and pastries to residents who come from all around Rowan County.

But one specific crew has been having weekly meetings at the coffee shop for seven years. “The 2 O’clock Crew” meets at Koco Java every Friday at 2 p.m. to talk, share stories and discuss what’s been going on in the county. The members of the crew are John Riley, Gordon Hurley, Mike Jacobsen, Kent Roberts, Gus Andrews, Terry Osborne, W.A. Cline, Ralph Shatterly, Frank Shafer, Randy Mowery, Eric Ennis and Glenn Ketner.

But the crew is open to anyone coming in on Fridays, pulling up a seat and chatting. At any given meeting, you could find Rowan County teachers, law enforcement officers, buisnessmen or politicians, sitting down and enjoying a cup of coffee with the crew.

The crew held a celebration for the owners of Koco Java, Arturo and Berta Therecka, to thank them for creating a welcoming environment for the Rowan community. A cake was brought and one of the members of the “2 O’clock crew,” Terry Osborne, general manager of the Rowan-Kannapolis ABC, gave a speech about how much the coffee shop means to so many people. He also invited as many people community members as he could to come to the celebration.

The Thereckas immigrated from Berati, Albania, in the 1990s, living in Connecticut before moving to North Carolina and settling down in China Grove. Arturo has been working in the coffee business for over two decades and in 2009, with Berta as his partner, he decided to try and open his own shop. Thus, Koco Java was born.

“We always had it in our mind to have our own coffee shop for us to work in,” Berta said.

The Thereckas plan to keep the coffee shop going until their two kids, Nicole and Johnathan, are old enough to take over the business. Johnathan has been working at the shop alongside his parents, hoping to one day take over his dad’s role as a master roaster. Nicole is currently studying at culinary school Le Cordon Bleu in Paris. She wants to become a pastry chef and bring her own pastry creations to the coffee shop.

Plans for a second Koco Java location are in the works, the Thereckas said.

“It’s such a success story of the Therecka’s, who came here from Albania, and shows a great example of those who came to the country and had an impact on this community,” Osborne said in an interview.

This is the 13th year that the coffee shop has been open.

“We’re happy to be here to celebrate,” said Lee Withers, the former mayor of China Grove, who attended the celebration.

“(Koco Java) is a community hub, a county hub and you end up meeting here to have discussions whether it’s on politics or just with friends catching up,” Withers said. “It’s the “Cheers” coffee house of Salisbury and Rowan County.”