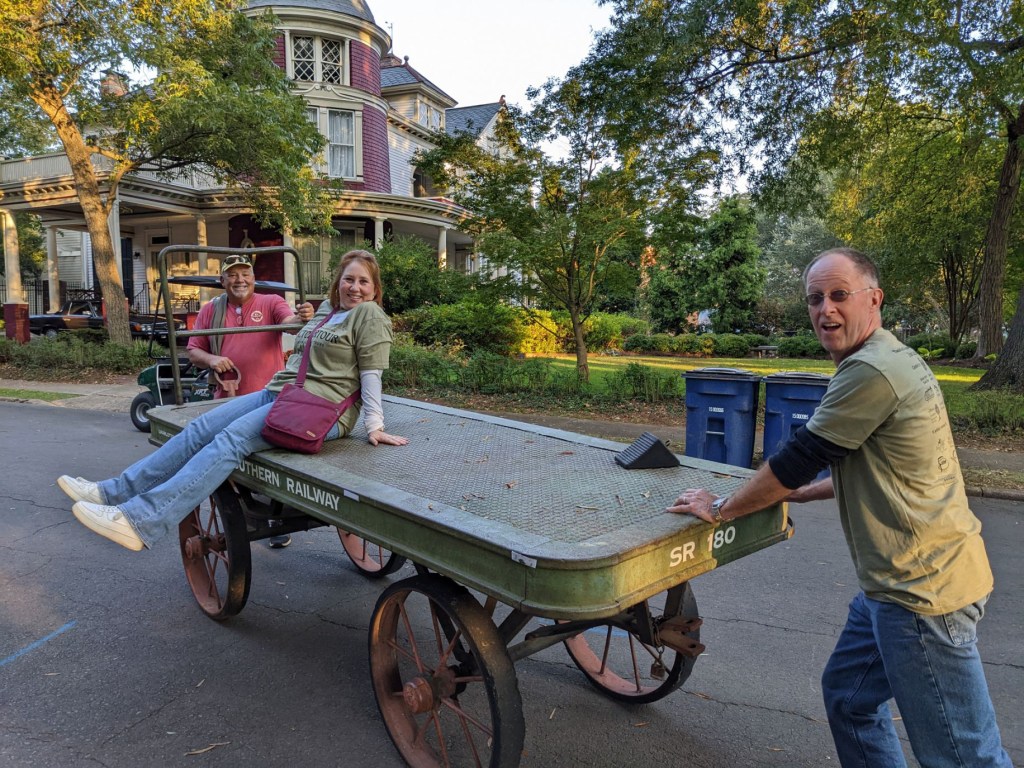 The Historic Salisbury Foundation’s Executive Director Kimberly Stieg did not know what lay in store when she and her husband, Scott, packed up from their home in Oklahoma. What she found exceeded every expectation.

“It’s been quite a year,” Stieg said. “I now have my first OctoberTour under my belt and am in the Leadership Rowan Class of 2023. I rode on the first ever Historic Salisbury Foundation Christmas parade float, am a season ticket holder to the local theaters, supported Waterworks and other nonprofits by attending their fundraising events, and volunteered at the Cheerwine Festival.”

The woman from Oklahoma said she was “smitten” right away and that with each passing experience, she is more in love with the town she now calls home.

But for an unfortunate circumstance, the trip that brought Stieg to Salisbury for the first time might never have transpired. She had been working with a headhunter and was looking for a position like the one she now holds, and while she had a lead on the job in Salisbury, it was far from a foregone conclusion in December 2021.

She and her husband had the car packed and were ready to launch from Oklahoma City for a holiday vacation with family in Arizona. However, an unexpected COVID diagnosis from a relative sent the Stiegs east instead.

“Oh, we are going pretty far,” Stieg said. “What if, pie in the sky, we could actually set up an interview (in Salisbury) whenever we go there.”

Although it was the holidays, Stieg was still able to arrange for an interview with the search committee, but then she realized she had nothing to wear.

“We pulled over in Chattanooga,” Stieg said. “When you are frantically looking for something professional to wear, and there is nothing but Christmas sweaters, it gets a little tricky, but we put something together, got back on the road and arrived in Salisbury the next day.”

When they got to Salisbury, the search committee chair took Stieg around town, and that is when everything started falling into place.

“Even though I didn’t have the job, we really needed to figure out if this would be a good place for us to settle,” Stieg said.

At first glimpse, everything seemed great, but Stieg was not satisfied.

“I thought this was fantastic, but we need to get the real scoop,” Stieg said. “We need to hit the streets. So we went up and down Main Street asking people what they thought about Salisbury. Everybody was so sweet and welcoming.”

It checked off their boxes.

“This place could really be our new home,” Stieg said. “It is like a Hallmark movie.”

One thing that stuck out to Stieg, like a lot of first-timers in Salisbury, was all the Cheerwine signs.

“In Oklahoma, I had never even heard of Cheerwine, ever,” Stieg said. “I was told the story about it and why it was important to the community.”

The Stiegs have firmly settled. They live in a condo downtown, attend church a block away, and take their dog, Mr. Magoo, for a daily walk in Bell Tower Green.

“What I have learned in this town, I will be at a downtown meeting, then later that night, I’ll be at church and say didn’t I see you at that meeting,” Stieg said. “Or you will be out to dinner at City Tavern and think, I know that person. It is really fun if you are trying to engage. Having that sense of community in such a short time is a blessing. I feel overwhelmed and cannot overstate my gratitude for how welcoming this city has been.

Perks of the job

Another element of the work Stieg has enjoyed so much is the salvage warehouse that compiles materials from yesteryear for local restoration projects. After all, she is in the preservation business.

“We have people who use us as a resource,” Stieg said. “They may have an older home that requires upkeep. Maybe the people there before cut a door, but now the owners want to fill it in and need matching trim. We have trim from all over Rowan County, and chances are we can match that for you.”

Stieg called the repurposing efforts of the preservation group “recycling at its highest level.”

The warehouse has a sale on the second Saturday of every month at the Ice House on Horah Street.

“People come in and tell us about the project from whatever they bought from us last month,” Stieg said. “They’ll come in and show us photos. It’s just a happy place. People come in and are with like-minded people. Everyone in that building cares about restoration and preservation. They want to learn more, and they want to share. It’s a really cool space.”

Each day remains an adventure for Stieg.

“If you embrace these things and enjoy them, you will wake up every day and not be able to wait to go to work,” Stieg said.

With a year under her belt, Stieg cannot wait to see what year two holds.