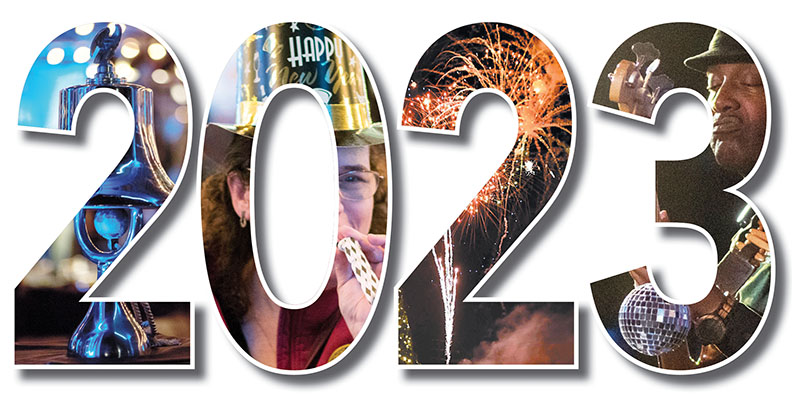 Every Jan. 1, gyms across the country see record substantial enrollment upticks, only to see the ambition of New Year’s resolutions quickly lose steam. Even with the odds stacked against the success of Americans’ annual attempts at self-improvement, several Rowan County residents are taking a stab at being better versions of themselves in 2023.

Jessica Padgett is a sales representative for Empire Distributors. Her goal is to lose 40 pounds. She’s been successful with weight loss in the past, but after putting some back on around the holidays, she’s hoping to get back on track this year.

Owen Teague, manager at Griffins Guitar, indicated that he wants to quit smoking.

Not every New Year’s resolution entails giving up a vice or breaking an old habit. Some are more focused on improving other elements of their professional or personal lives.

“We are opening a plant bus,” Gellar said. “That is going to be our mobile store. We can go to events or different places and stuff like that. We are really excited to get that up and running.”

A couple of patrons in Plant World were getting a head start on their New Year’s resolutions on Tuesday. Sharon Gardner and Samantha Allen said they wanted to buy more plants in the new year.

Sometimes being a better person starts with how one treats other people. That is why Dave Loflin, the manager at Thread Shed in Salisbury, said he is taking the opportunity afforded by a new year to be kinder to his fellow man.

“I am hoping to try to project better and do nicer things onto others,” Loflin said.

Loflin’s colleague at Thread Shed, Janie Kluttz, indicated that a path to a better 2023 for her starts at home.

“My New Year’s resolution is to get more organized,” Kluttz said. “I think our life at home would be a lot better if we were a little more organized.”

For Kelsey Sorenson, an instructor at Pottery 101, 2023 will be more about being present in the moment, so she is going to try to work on her time management skills.

“I want to make sure I am having better quality time, like working time versus relaxing time,” Sorenson said.

Some area residents are taking unconventional approaches to the annual tradition. Sammitria Pinckney is currently a manager at Greek Paraphernalia and wants to take advantage of the blank slate that comes with the new year.

“I always try new year’s resolutions, but I told myself this year that I am not going to do that this year,” Pinckney said. “I am going to start off with a clean slate. Go into the new year, like OK, this is the time for a change. I have to put my best foot forward, not hold back, and wait to do stuff like I normally do.”

Pinckney is a recent graduate of Livingstone College. Her degree was in social work.

“The last few months since graduation have been long, strange and brand new,” Pinckney said. “I still am mapping out what I want to do, but I do know I want to go back and get my master’s.”

Over in Landis, Alderman Darrell Overcash remarked that he resolved to have good health in the coming year.

As for the town he represents, Overcash hopes to find a full-time town manager. Landis hired Phil Conrad to serve as an interim town manager following former town manager Diane Seaford’s departure at the end of November.

Some resolutions aren’t as specific as others, but like Overcash’s personal resolution, health circles back to the forefront. For former Food Lion executive Tom Smith, his age played a significant role in determining his resolution.

“When you get to be my age, your New Year’s resolution is to make it another year,” Smith said.

Sometimes those resolutions are pretty simple. Chef Santos said his New Year’s resolution is more of a message.

“If you don’t do anything else, just be nice to people,” Santos said.